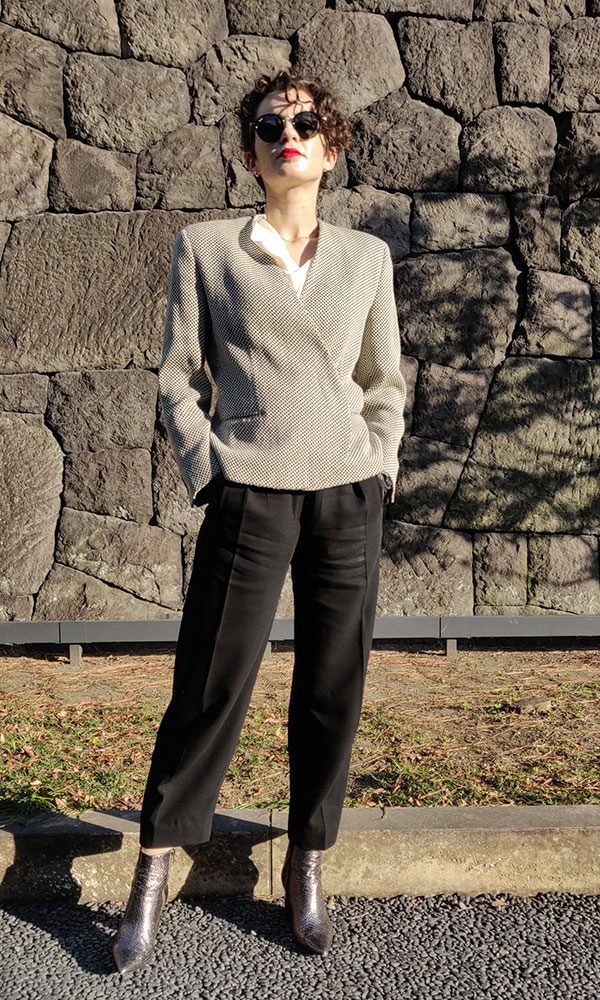 This is part one of a three-part series that argues for degendering fashion, written by Emilia Bergoglio. After coming out as non-binary, Emilia now works to educate others on the impact that binary language has on fashion and home sewing. In part one, they will introduce the nomenclature that genders clothing.

What is the first thing you notice when entering a clothing store? Or—more aptly for this publication—when browsing a website for patterns, which section do you look for? You might reply with some variation of, “I try to locate the [insert gender]-wear section,” and you wouldn’t be wrong. Even here on Seamwork, you’ll find a little collection of patterns grouped into a “menswear” section as opposed to everything else. It has become natural over the decades to associate specific color combinations or choices of attire with a set of people, so much so that subversion of these unwritten rules are often derided—if not worse.

But, you know, it really doesn’t have to be that way. 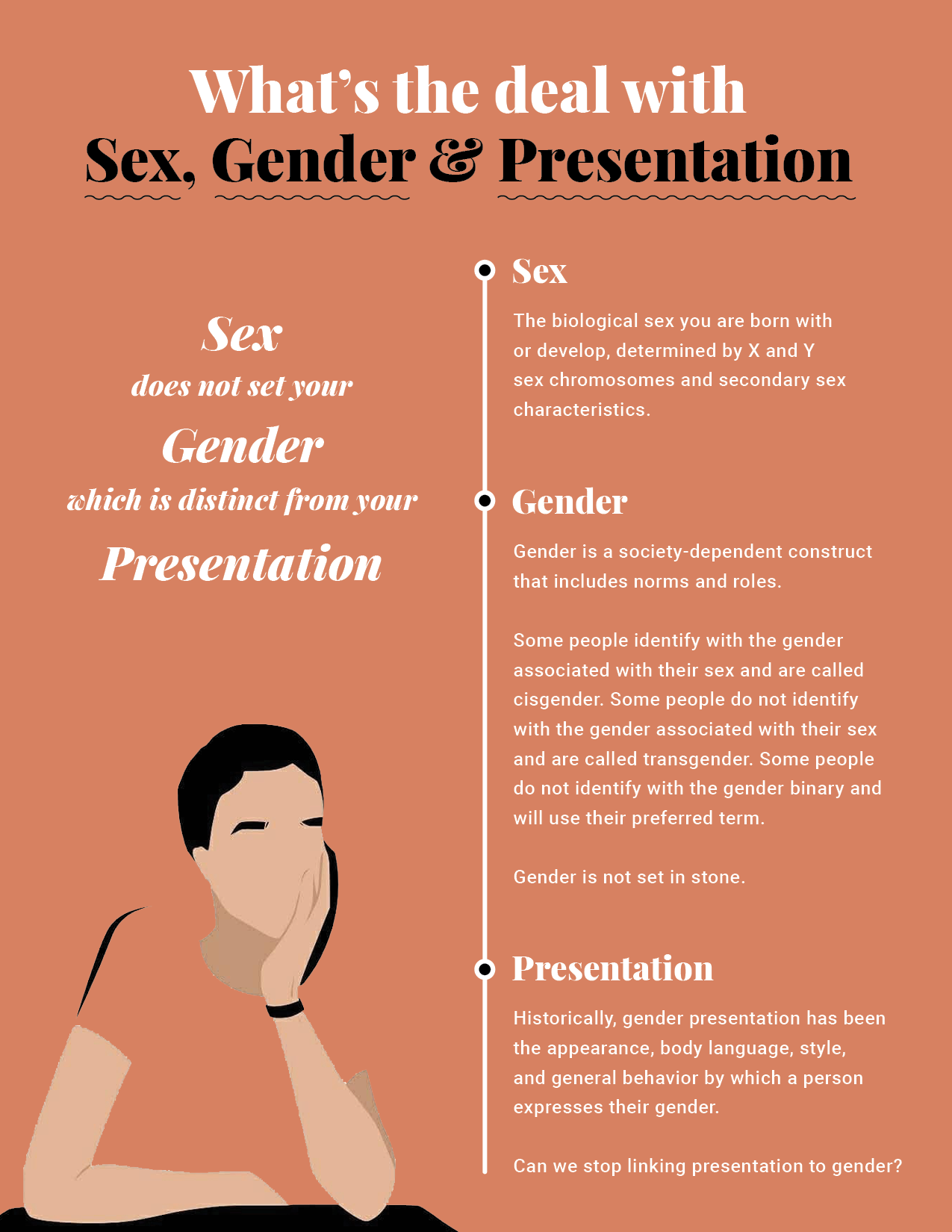 Do We Need to Divide Clothes by Gender?

What if this division of clothing by gender is not for you? What if you are among those humans who think clothing is just clothing and doesn’t belong to a gender intrinsically—that it’s the wearer’s prerogative to give it one? Or, what if you are transgender and your gender identity doesn’t match the gender which was given you on the basis of your sex? What if you feel like humans should be allowed to wear what they want, that patterns should have no gender, and that more bodies (not just in size and race, but also in gender) should be portrayed in magazines and on pattern envelopes?

Since coming out as non-binary, finding ways to express myself in a way that matches my inner-self has become central for my sewing, and being stuck in this rut of strict, inescapable gender dynamics feels increasingly ludicrous. Even long before realizing I was trans, I never really understood the purpose of clothing being divided by gender, as if wearing a garment from the other side would cause your skin to burn…or something. 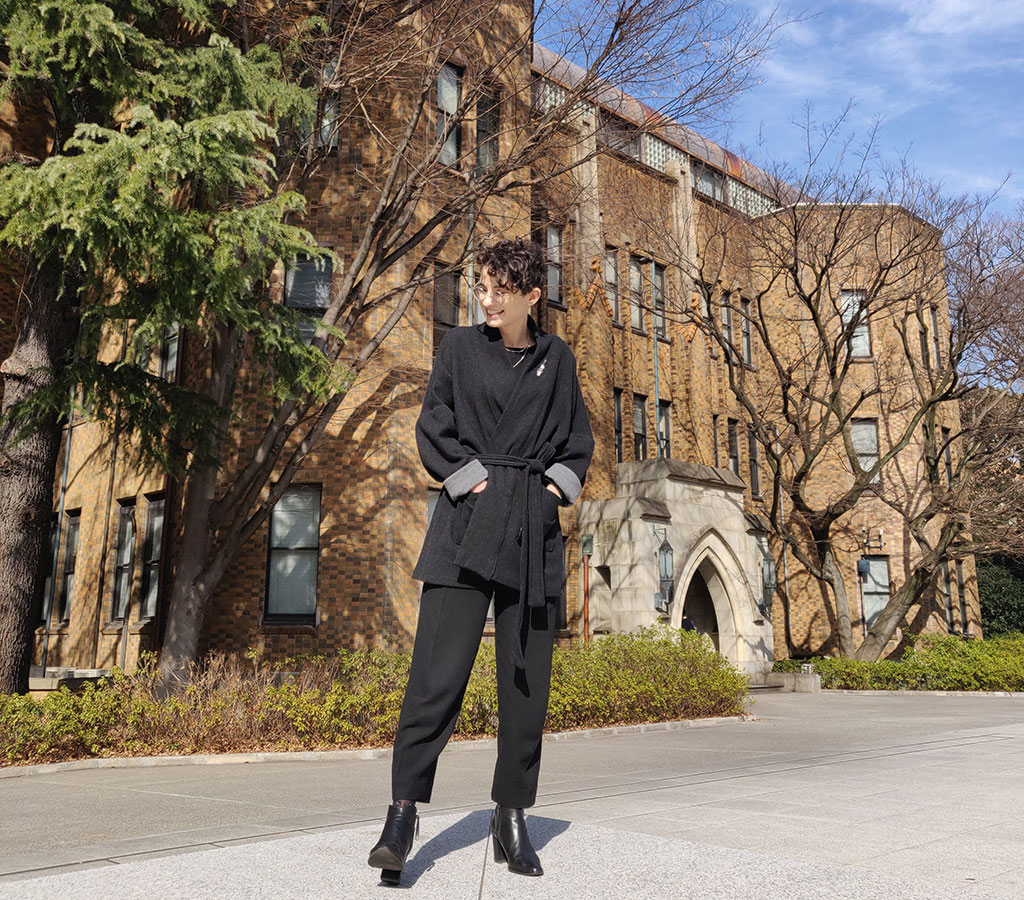 I get that bust darts help shape clothes around my breasts, but reading “women’s” as a way to describe these clothes makes me dysphoric. To make sense of all of this, I started doing a lot of research on the origin and meaning of the gender binary, first in dress and then in society. I realized that even among the queer community, confusion was rife. Even speaking about the same issues using the same nomenclature proves to be a challenge. And don’t get me started on how sex and gender relate to pattern cutting!

These are not really fringe issues, as I mentioned, because one doesn’t have to be transgender to be negatively affected by the current exclusionary system. This is a matter of human rights, rather than language, and therefore interesting to the population at large, not just the LGBTQIA+ community.

So, in this first installment of a short series, which I will affectionately call “subverting the binary by means of many blazers,” I’m going to introduce the basic terminology according to the most recent discourse, so we can all start from the same ground.

I also want to stress that the need to eliminate binary nomenclature in fashion does not condemn the desire or the need for people to have clothing that fits their body for the sake of creating a uniform, unisex silhouette. That couldn’t be further from the truth. Personally, I detest the term unisex, which is problematic for several reasons, from the fact that unisex fashion is just adapted menswear (sending the message that menswear is the standard, and womenswear is somehow a degenerate, inferior, form of it), to fatphobia, to the glorification of whiteness, all bundled into one magic garment supposed to fit them all.


Since coming out as non-binary, finding ways to express myself in a way that matches my inner-self has become central for my sewing, and being stuck in this rut of strict, inescapable gender dynamics feels increasingly ludicrous. 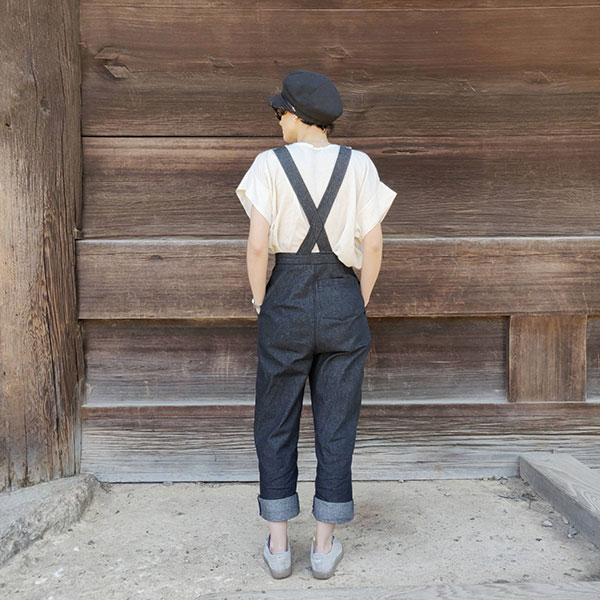 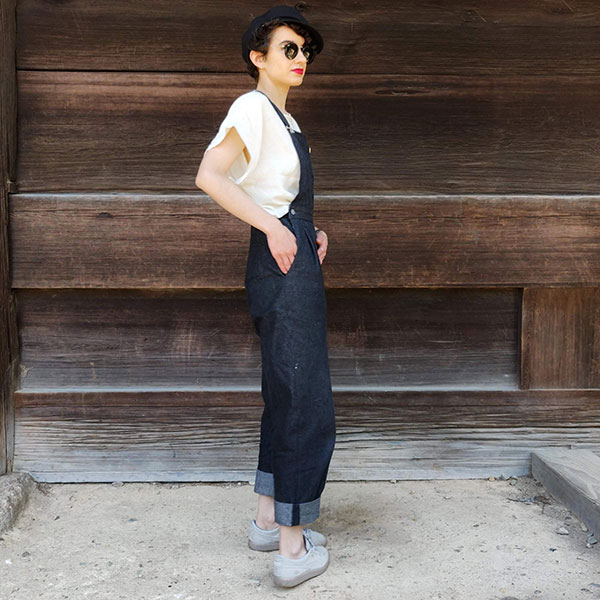 Many activists in the field advocate for gender neutrality, which removes the labels linking garments to gender—using descriptors instead. This means “darted shirts,” or “fitted bodice dresses,” or “straight-cut trousers.” We still consider differences between bodies in the drafting, so people can wear what makes them feel great. I don’t think that slapping a label to indicate which gender is “allowed” to wear said clothes is necessary to the entire endeavor.

The Difference Between Biological Sex, Gender, and Presentation

Moving on to the topic du jour, there are three components to keep in mind: biological sex, gender, and presentation.

Biological sex refers to sex chromosomes (X and Y), as well as primary and secondary sex characteristics (genitalia, hormones, hair pattern, the works), and related body characters downstream from these factors. Despite centuries of enforcement of a sex binary, with people divided into either male or female, it is now widely accepted that sex is really more like a continuum—a term you often hear regarding gender. This is mostly thanks to intersex activists who, over the years, have really advocated for a revision of long-held beliefs that sex is truly binary.

Gender, on the other hand, is a societal-based construct, which includes gender norms (for example, who does child-rearing?), gender relations, and yes, dress. Since gender is society-dependent, this is not carved into stone: look at recent history and how much gender roles have changed. Think of how heels were originally for men to wear and how the kimono is a dress, the same shape for everyone. There are so many instances in history of gender constructs changing; we could talk about it all day.

While we are on the topic of gender, you may be wondering about other terms such as “cis” and “trans.” Very simply, this is because in many societies, gender is assigned on the basis of sex, for some reason (shrug emoji). Therefore, female-sexed individuals are called “women” and male-sexed individuals are called “men.” But—and this is a big but—this doesn’t make it true. If a person is not identifying with the gender given to them, this person is called trans. Conversely, a person who is cool with the gender they’ve got is called cis. Simple!

A non-binary individual is a person that does not identify with the gender binary. They might identify as a third gender, no gender at all, oscillate between two or more, or feel like they belong to all genders. Some non-binary folks also use the term trans to indicate that they are not cis.

Now, things get more complicated when it comes to the idea of gender presentation. Historically, people have always associated presentation with specific markers, such as mannerisms, speech, hobbies, décor preferences, and of course dress, which relate to that person’s gender. However, it is now apparent that more than “gender signifiers,” the ways a person expresses their gender can be due to matters of style preference but also safety. The fact that someone can be unsafe because of how they express their gender creates the argument that presentation should not have any bearing on gender. 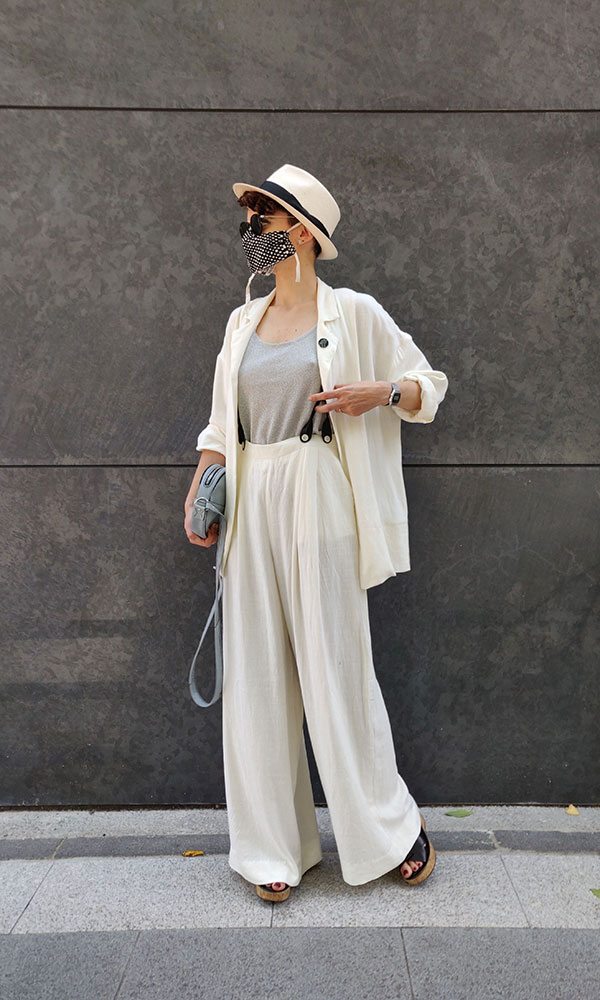 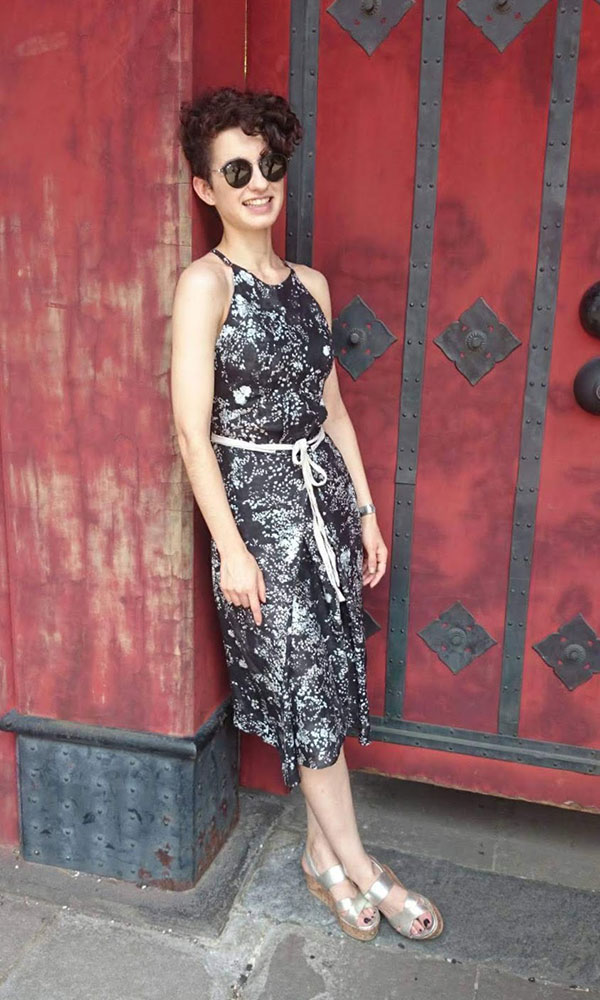 For example, non-binary folks don’t need to dress androgynously to be non-binary. A trans woman doesn’t have to dress feminine to be a woman. It may be unsafe for some to dress in such a way to affirm their gender in their community. Those people are still valid, therefore, it is important to understand that presentation and gender are two distinct entities. Ultimately, people should be allowed to dress the way they want, period.

We understand now that sex doesn't determine the gender of a person, the two concepts being quite distinct. The presentation that each and every person chooses has nothing to do with their gender, but is influenced by a variety of factors, like style, comfort, and safety. Because of this, beyond some historical conventions, there is no real reason to label clothing with gender markers.

In the next article in the series, we’ll learn how this dynamic affects patternmaking, sewing, and fashion in general—and discuss possible alternatives.


When they are not busy in the lab, Emilia enjoys spreading the love of sewing with everyone around them. As a strong believer in the statement, "you can make that!" they are always looking for more things to DIY. You can find them on their blog. 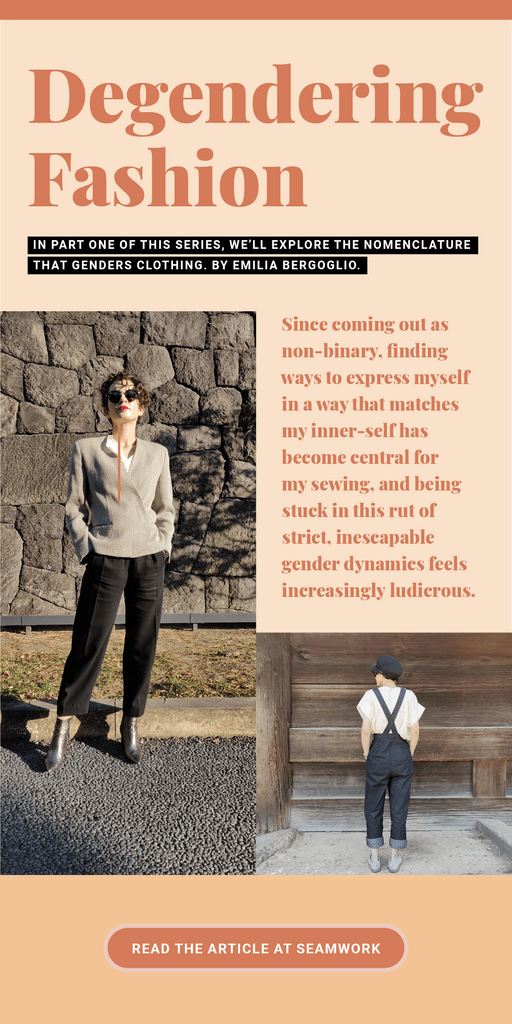