David Moore explores what it is like to be a male sewist. 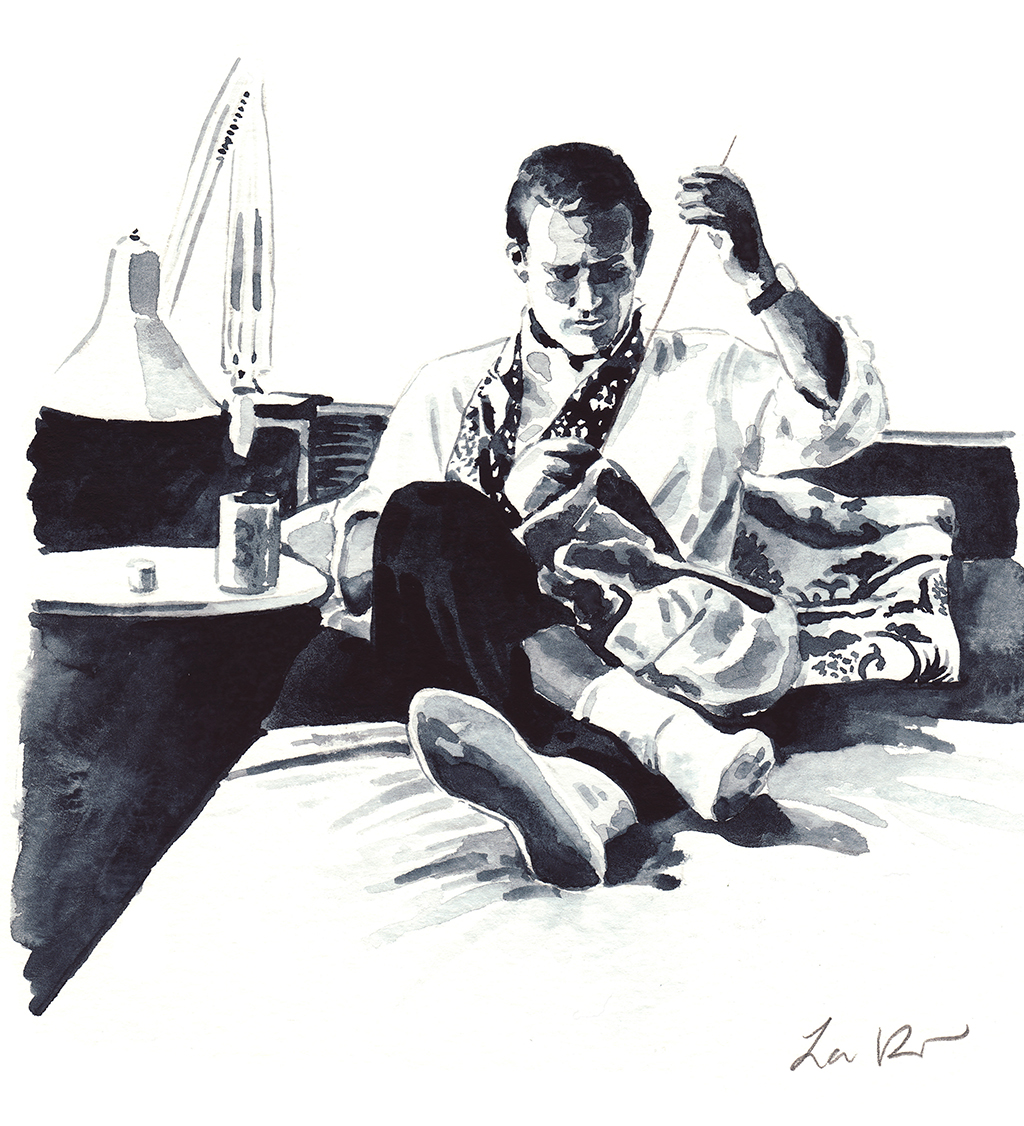 This question has been on my mind for quite some time, and frankly, I kept coming up empty. It’s not that I lack opinions (on almost everything, actually), it’s just that every time I thought about what might be unique about being a guy who sews, I kept coming up with counterexamples: women sewers who eschew bold or flashy patterns, men who prefer silk next to the skin, and softball players (male and female) who like to get dirty on the diamond and then go home to patch up their ripped uniforms.

Just recently, while talking with my mother about the first brand-new sewing machine I’d purchased, she told me that my father—he of the engine oil-covered hands, electrician’s tool belt and endless woodworking projects—always loved to sew. He would replace the collars and cuffs in his worn-out, Navy-issued shirts, hem his own pants, and patch his own jeans. He even started sewing some of our baby clothes when the patterns proved too frustrating for my mother. According to Mom, when she and Dad divorced nearly thirty years ago, his first purchase was a new sewing machine. Even before buying the first of his many new cars.

I’ve known this man for fifty-one years. I did not know any of this.

So how was I supposed to talk about what it’s like to be a male sewer when all of my assumptions were being knocked to the ground around me? I stewed. And I stewed.

Lately, I’ve been watching a British sci-fi series. The premise is nothing unusual: Humans create humanoid robots to act as a servant class. A small group of the robots become conscious, sentient. Most of the humans react in fear and try to capture the sentient robots, so they can be “recycled.” A few of the humans try to help them find, well, something (I imagine that will be addressed in season two).

About halfway into the season, the question finally takes a new turn. A human woman, petite, white, young, and one of the sentient robots, tall, built to appear African, built to appear as if “he” is in his mid-thirties, are walking together. Almost predictably, she asks him, “What’s it like to be you?”

“I don’t know” is his expected response. Then he continues (and I paraphrase): “I see beauty and love all around me. I also see anger. I feel fear. I’m confused…” he says, then falters.

There’s a pause. Then: “What’s it like to be teenage girl?”

Without skipping a beat, she says, “Not so different.”

What’s it like to be a male sewist? Turns out, it’s not so different.

I have come to sewing for many of the same reasons that the women sewers I know have come to the craft. I have an urge to create that refuses to be stifled. In a world in which so much is done for us, by unseen hands, I like knowing the source of the clothing I wear and of the materials that go into that clothing. I like knowing that if the zombie apocalypse does, indeed, come to pass, or if I do find myself with a personal robot and it/she/he can’t be bothered to make me a new pair of pants, I can be self-sufficient.

Perhaps more than anything, I love the sound of my satisfied inner child when I look at something and say, “I made that.” (Even if no one but me is around to admire it.)

Turns out, I share much with my family of sewists. And, apparently, with my own family of birth.

There are some things about being a guy who sews that are different from being a woman who sews. Let’s talk about the biggest and baddest of all: Overcoming the notion that boys don’t sew.

Since beginning my own journey into sewing, I’ve read many essays by women that talk about how sewing, knitting, crochet, weaving, and other fiber-related arts are devalued because they are seen as “domestic” arts, in other words, considered women’s work. Overcoming that message is, for many women, quite difficult.

But for many men, however, the message is doubly pernicious: sewing and knitting and other crafting isn’t just devalued. It Just. Isn’t. Done. At all. Not by “real” men.

Yes, it’s a sexist message. As enlightened adults we know that. But it’s also a very powerful message and a lesson that, even today, is often learned when very young, when one doesn’t have the necessary internal resources to reject such ignorance.

When I was in fifth grade, my teacher taught the class to knit as part of an art project. I went nuts. I loved knitting. I loved the rhythm of it, I loved the magic of seeing long pieces of yarn turning into something real and three-dimensional. I loved that knitting seemed to silence my overactive brain and calm many of my fears.

I was blissfully unaware that bright green aluminum knitting needles and rainbow-colored acrylic yarn could be viewed by anyone as problematic. I knitted and knitted and then I was told by an Important Adult (not my father, as you can now imagine) that boys don’t knit.

So I stopped knitting. I was already aware that I was a little bit different than other boys, and at the age of nine, I was not about to push that issue.

Fortunately, my “how I learned to knit” story continues and is the precursor to my “how I learned to sew” story. About eighteen months ago, a series of medical tests returned bad news. Immediately, I was launched into a world in which there were too many questions, too few answers, and too much time waiting in doctors’ offices and hospital rooms. (I’ll cut to the good news: I’m fine now.)

To this day, I still don’t know how this thought entered my brain, but for some reason, I decided to take up knitting again. And once again, I found solace. Just as it had when I was nine, knitting calmed me. It focused me. It gave me a sense of mastery and accomplishment when it seemed that everything else around me was confusing and out of my control.

As I got better at knitting, I realized that what I was really doing was making. And learning to sew was a natural outgrowth of that urge to create. I found someone with a secondhand sewing machine and borrowed it. I signed up for sewing classes. I read a lot of blogs. I discovered Colette and subscribed to Seamwork Magazine.

I also got used to explaining to people that, yes, boys do sew and knit. This time around, I was brave. I began knitting in public, wearing the things I’d sewed, giving the things I’d made to others, even if I needed to answer a string of questions at every step.

A few months ago, after talking to my mother, I cornered my father at a family party and asked him about his sewing. He opened up like a book and told me all about how he got started, the things he’d made, why he stopped. He said all of this without batting an eye, as if his age and the passage of time had made all of the baggage of men’s work versus women’s work completely irrelevant.

While we talked, my aunt wandered into the room and sat down with us. She joined in: “You know I was always the one who fixed the family cars, right?”

No. I did not know that.

What’s it like to be a male sewist? I’m still learning.


David Moore is a freelance writer and polymath. Consequently, he’s good, but not great. His makings and musings can be found on Instagram at @seattleknitterguy. 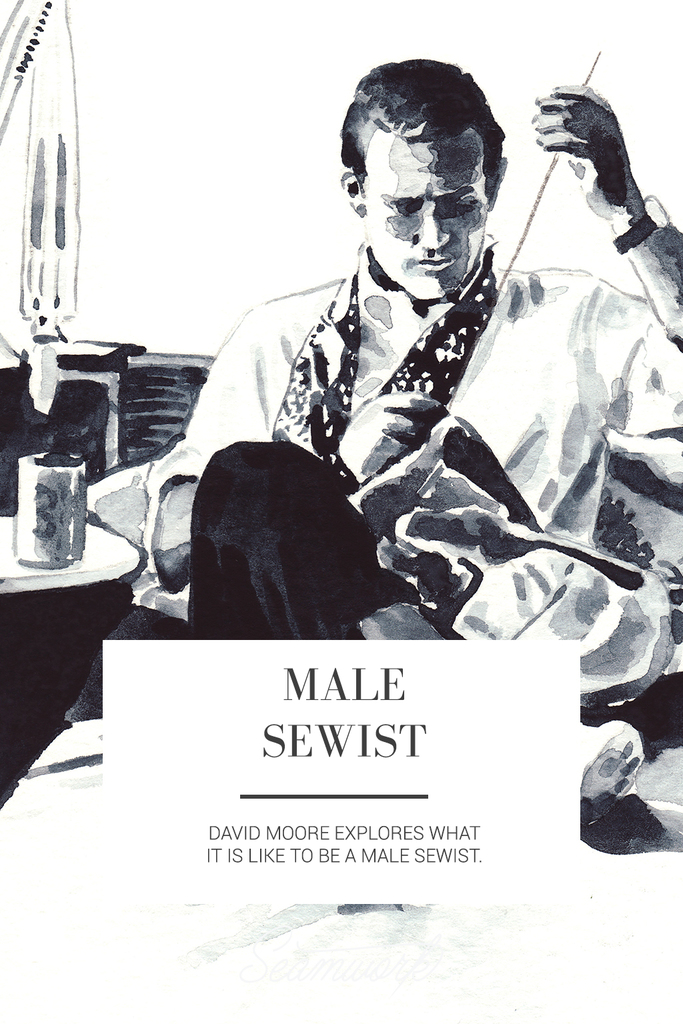