A mint green Hello Kitty sewing machine saw me through my senior year of college. Perhaps it was a bit childish for a 20-year-old, but it was my perfect fit. It was three-quarters size, making it teensy tiny dorm room friendly, and it was just absurd enough to be utterly unintimidating. I certainly needed unintimidating: a brush with a sewing machine earlier that year had been nigh-on traumatic, and almost brought my dreams of sewing elaborate costumes and simple everyday attire to a grinding halt.

The spring before, I tried using a friend’s sewing machine to make a costume. We were working as a group for a cosplay competition, so a team of us met on the weekends to trek out to buy fabric, cut out and modify patterns, and sew up fanciful, illogical, and astoundingly colorful costumes. Not everyone had a sewing machine–not everyone could even thread one!–so those who did brought theirs and showed the others how to use them.

But it was just enough of a tantalizing taste of the crafting world that I couldn’t give it up. Part of the cosplay process was tracking down tutorials online, and through that hunt I found the sewing blogger world. I was hooked–

it never occurred to me that because I could sew a costume, I could also sew my own clothes. I dreaded shopping, and didn’t really know how to dress myself, as evidenced by my wardrobe of too-long jeans, graphic t-shirts for nerdy TV shows or anime, and a few ratty, stretched-out cardigans. I spent most of my childhood petrified of wearing feminine clothes, as I had been labeled a tomboy early on, which meant if I so much as wore a skirt I got snickers and comments. Cosplaying was as much a way for me to sneak my own femininity back into my life as it was a craft and a way to make incredible friends. Sewing my own clothes seemed like the next step in advancing a new hobby and reclaiming the love of cute dresses and skirts I had kept bottled up for so long.

When I stumbled across the pastel pink box of the Hello Kitty sewing machine a few months later, it clicked. It was on sale. It had good reviews (mostly by mothers extolling how well it worked as an introductory machine for their children, but hey, if a tween could use it to sew a circle skirt, I had to be able to sort it out!). And it simply seemed right, even if it was hardly what I expected to buy. It was unabashedly girly, and while I would’ve shied away from it in the past, that made me love it all the more: its cheerful girliness felt like a sign.

It left the store with me, and when I set it up in my sublet for the summer, it was a bit like magic. I wasn’t scared, and it wasn’t shredding the simple gathered skirt I was attempting, even when I tried (and succeeded) at adding buttonholes down the front.

On that endearingly silly mini machine, I sewed a jacket edged in bias tape and a box-pleated skirt with suspenders for the same cosplay competition the ill-fated red button-up was meant for. I sewed three perfect button holes without incident. We won Best Novice Group after spending months laughing together and sewing far more pleats than I ever want to see again, and my little green machine helped us do it.

But I also made a gathered skirt from fabric and buttons purchased from my internship at Colonial Williamsburg, a marriage between eighteenth century textiles and my modern tastes–a truly showy garment that refused to hide the fact it was a skirt. I made elegantly drapey knit t-shirts, a casually stylish dress made of flannel, a refined pencil skirt for a graduate school interview. It wasn’t all selfish, either: I made my sister a bag for Hanukkah and my boyfriend a cardigan for Christmas. Sewing didn’t stop with cosplay, although that’s why I broke down and bought the machine; it became my way of literally working through the stress of finishing undergrad while prepping for a straight launch into graduate school. If I could control fabric, thread, and speedy sewing needle, I felt like I could control my own life a bit better.

By turning a pile of fabric and thread into something wearable, there was nothing I couldn’t tackle.

I still have the silly mint machine, and I still use it, even if it’s starting to sound a bit clunky. While I’ve plans to replace it with a “proper” machine, one that perhaps is a bit fancier and can do more tricks, I’ll never get rid of it. After all, for me, it’s the perfect machine. After all, the best sewing machine is the one you love to use.

Jennifer Hackett is a science journalist trying to be stylish enough to live in New York City. Her portfolio site and blog–which guest stars sewing when it isn’t about science or geek culture–can be found at www.jeniwriter.com. 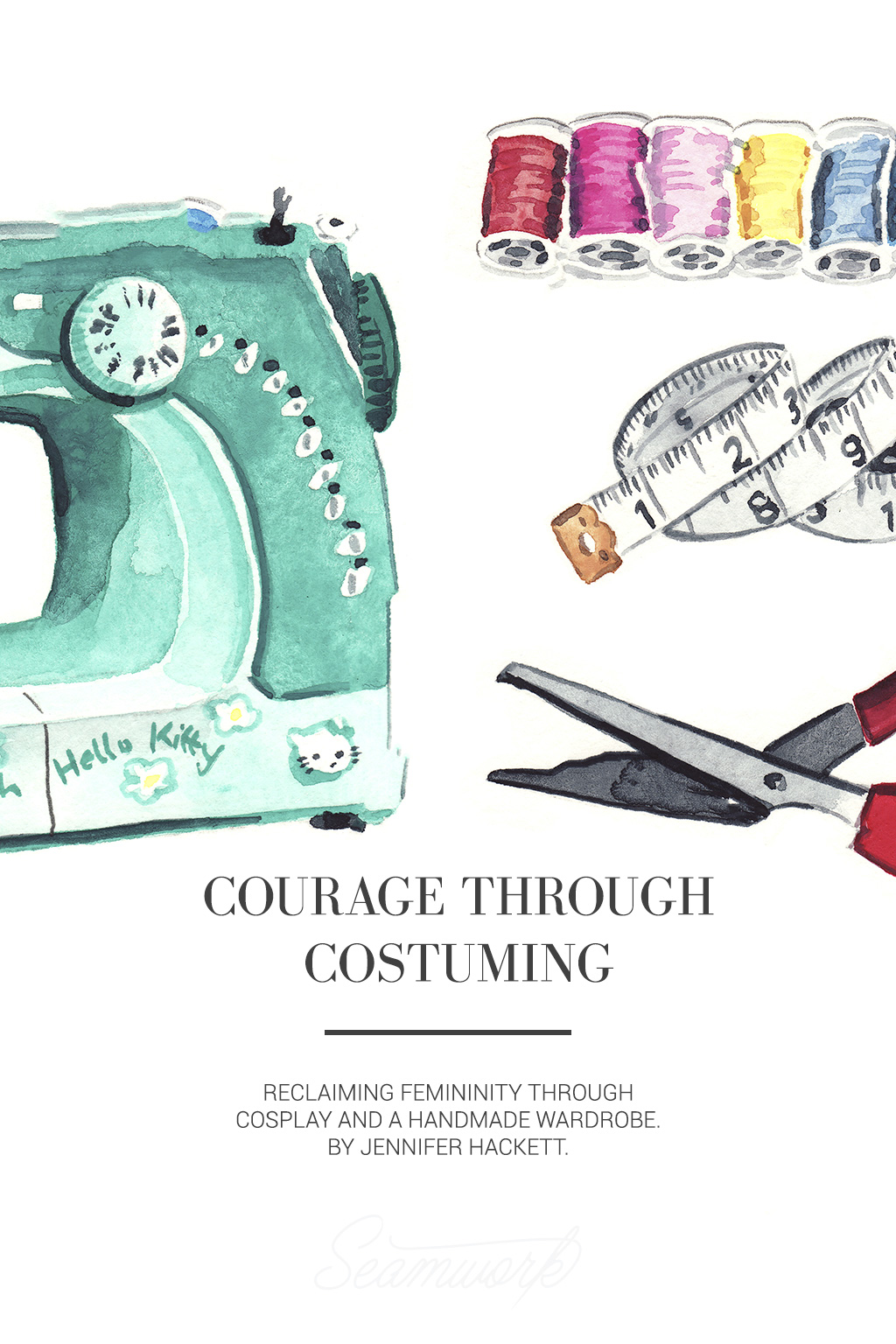