A textile artist with a deep concern for sustainable practices, Rebecca Burgess was increasingly concerned with the negative ecological impacts of the textile industry. The World Bank estimates that nearly 20% of industrial water pollution worldwide comes from textile treatment and dyeing. Determined to align her values with her wardrobe, Rebecca set herself a year-long challenge: to only wear clothes that had been grown and made locally. She partnered with local growers and artisans and documented her progress on a blog, and the One Year Wardrobe Challenge quickly grew into a movement.

What started as a response to industrial practices quickly grew into a non-profit organization, Fibershed. A fibershed is a geographical landscape that provides the resources and infrastructure to create locally harvested and woven cloth. Today, Fibershed maintains a portfolio of activities all oriented toward one goal: the development of a regional “soil-to-soil” system, where textiles are grown, processed, designed, sewn, sold, worn, and eventually composted within a 150-mile radius in northern California. Fibershed seeks to address the environmental and social costs of fast fashion by promoting ecologically sound practices, supporting local businesses and artisans, and emphasizing a mindset of quality over quantity.

Teaming Up For Local Textile Production

Initially, Fibershed focused on creating a marketplace for the artisans involved in the One Year Wardrobe Challenge. Those efforts quickly expanded into educational workshops and booths at local events. Fibershed also began hosting events like fashion galas and an annual Wool & Fine Fiber Symposium.

For years, Kristine Vejar, the owner of the Oakland, California yarn and fabric store A Verb for Keeping Warm, dreamt of creating her own line of locally-grown, locally-dyed yarn, but was stymied by the inability to find high-quality wool that would knit up well. Part of the problem involved locale: because the local climate is so foggy, it is difficult to raise fine wool sheep as the sheep will grow mold. Part of the problem involved economics: because there is no local market for California wool, it has little market value, so growers see no reason to sell their wool, and therefore no reason to invest in improving its quality.

When she attended Fibershed’s first Wool & Fine Fiber Symposium, she met the growers and shearers who could help make her dream a reality. She took the plunge to begin collecting large lots of wool, typically 500 lb. lots, and began milling her own yarn. This resulted in her first line of yarn, Pioneer; she now has two more lines, Flock and Range.

“I really appreciate the Wool & Fine Fiber Symposium because it brings many different types of farmers, ranchers, and designers (of yarn and clothing) together in the same room. Prior to this symposium, we did not have this kind of interaction.”
–Kristine Vejar

Although there is a wealth of interest, energy, motivation, makers, and growers, the region lacks the infrastructure to create a soil-to-soil system. Events like the Wool & Fine Fiber Symposium bring together players from across the spectrum to discuss these challenges and opportunities, so that together they can look at the infrastructure gaps and identify ways to surmount them.

Five years after her personal challenge ended, Rebecca’s local wardrobe is still going strong. Many of the dresses, tunics, tops, and skirts from that year remain well-loved staples in her wardrobe, but she has found it helpful to strategically purchase specific items from outside her fibershed. She now has a nice pair of black wool pants that she wears for everything from yoga to giving keynote presentations, and she challenges people to look for that level of versatility when they purchase garments. Natural fibers are also key, so that the garment can eventually return to the soil.

Wool base layers and wool socks have also proven critical because her fibershed does not produce cloth, it produces yarn, and she found she went through hand-knit socks so quickly that she couldn’t keep up with the darning. “We have the raw materials, but we don’t have the right kinds of machinery available locally to process it. Basically, local cloth is still on the agenda for our region,” she says.

A Series of Stepping Stones

Without these kinds of community-building events, it can be difficult to create coordinated movement toward systemic change. Another way Fibershed stimulates infrastructure development is through prototyping. Developing new business ventures that support a fibershed can be risky, so prototypes provide a low-stakes way to demonstrate the viability of a concept. “Prototypes create an innovative space where you’re using local materials and showing people what’s possible,” says Rebecca.

The Grow Your Jeans project, for example, established the viability of locally growing and producing indigo dye. Indigo is an ecologically friendly alternative to the fossil fuel-based dyes typically used in denim production. The leaves and stems are dried until the moment when the stems are supple but the leaves are crispy, and then they are crushed (in the Fibershed method, human feet stomp them). The leaves are separated out and composted before fermenting in a mixture of water, hardwood ash lye, and crushed lime to create the dye. The full cycle, from the time of planting to when the dye is ready to use can take up to 10 months.

The project allowed local producers to test and refine a growing and processing methodology that was both sustainable and appropriate to the region. This paved the way for local indigo production to become a business in its own right. In 2015, four local farming operations grew indigo, and together they harvested and processed the leaves to create the raw materials. Fibershed supported them by providing seeds, consulting on best management practices, and otherwise serving as a bridge between research and business development. With each successful proof-of-concept, the organization comes one step closer to developing the ecosystem of businesses needed to grow, process, and produce local textiles.

The prototypes also serve as a springboard for future collaborations. Sally Fox, the farmer who grew the organic cotton used in Grow Your Jeans, met a number of new customers through the project. The North Face is now one of her buyers, and this business relationship led to another prototype, The Backyard Project. Through The Backyard Project, The North Face released a limited edition collection of hoodies that were grown and sewn within 150 miles of the organization’s headquarters. (The cotton was milled in the Carolinas, as there were no mills in the region that could do this work.) In an effort to increase the sustainability of the project, the garments were also designed and cut to produce as little waste fabric as possible.

Daniel DiSanto, the designer involved in The Backyard Project and Grow Your Jeans, has been so inspired by these collaborations that he has started several projects to promote awareness of how current apparel production and textile manufacturing is harmful to our environment.

Other times, small businesses emerge from feasibility studies that Fibershed puts together. In 2013 they released a study on the California wool supply, which stimulated a number of ventures to process the wool locally and otherwise keep the fiber within the state. Thus, Fibershed has been able to spur economic development in numerous ways, from supporting small businesses to shifting practices in large, established ones. And local businesses like A Verb For Keeping Warm can expand the range of transparent, ethical, and local fabrics and yarns that they carry. “Our hope is to continue finding fabric—and supporting companies who are making organic fabric—where there is transparency in where it is grown, by whom it is grown, and how it is manufactured,” says Kristine. “And maybe one day we will make our own fabric.”

When Rebecca first jumped into prototyping, she didn’t have role models or mentors. “The One Year Wardrobe Challenge initiated me,” she says. “I’ve been a hands-on person much of my life, so the idea of prototyping felt very natural to me.” Prototyping uses a learn-as-you go mindset that embraces experimentation, trial and error, and iterative tweaking. After years of knitting, spinning, weaving, and dyeing, this approach felt natural to her.

Looking to the Future

So far, Fibershed has put its money where its mouth is, strategically investing its own dollars in prototypes that clear the technological hurdles to local, sustainable fiber production. Sometimes these technologies already exist, but they’re locked away in academic laboratories with few pipelines available to bring them to market.

Hemp, for example, has twice the biomass density of cotton, can be grown without pesticides or herbicides, and can thrive in arid and water sensitive regions. Even as Fibershed has partnered with growers in Colorado and Kentucky to figure out the best ways to organically grow hemp, they’ve also looked for ways to soften it. One thought is to blend it with wool to give it a weightier hand with more drape.

The next step for their regional fibershed, says Rebecca, is to begin processing California wool locally instead of sending it across the country or overseas to be washed, carded, and spun. That will require a larger capital investment than many of their prototype projects so far, but Rebecca believes it’s time to get serious about building this type of infrastructure. “I’m looking for ways to get these kinds of bigger picture projects funded through alternative funding mechanisms—not a bank or a venture capital fund,” she says.

“I just want to see this regional fiber system up and running,” Rebecca says. “I see so many more dominos that need to fall to make it all come together, and hopefully we can keep up this rapid-fire pace.”

Want to get involved?

Create your own wardrobe challenge. Tailor it to what you can do. Will you make one outfit? Do you want to try natural dyeing? Embrace a natural palette? You can even start your own fibershed project.
Get to know your fibershed. Who raises and grows fiber in your area? What natural dyes can you find? Are there local artisans or farmers you can support or learn from? Helpful places to look include local fiber festivals, fiber arts, guilds, farmers markets, and local farm directories or organizations.
Learn more about supply chain evaluators and certifications, like those offered by GOTS or Cradle to Cradle.
Chat with your local fabric shop owner. Let them know you’re interested in transparent, ethical, and/or locally grown fabric.

Jessica Yen is a freelance writer and editor who lives in Portland, Oregon. A lifelong color lover, she is intrigued by the thought of experimenting with naturally dyed and undyed fabrics. You can find her online at jessicayen.com. 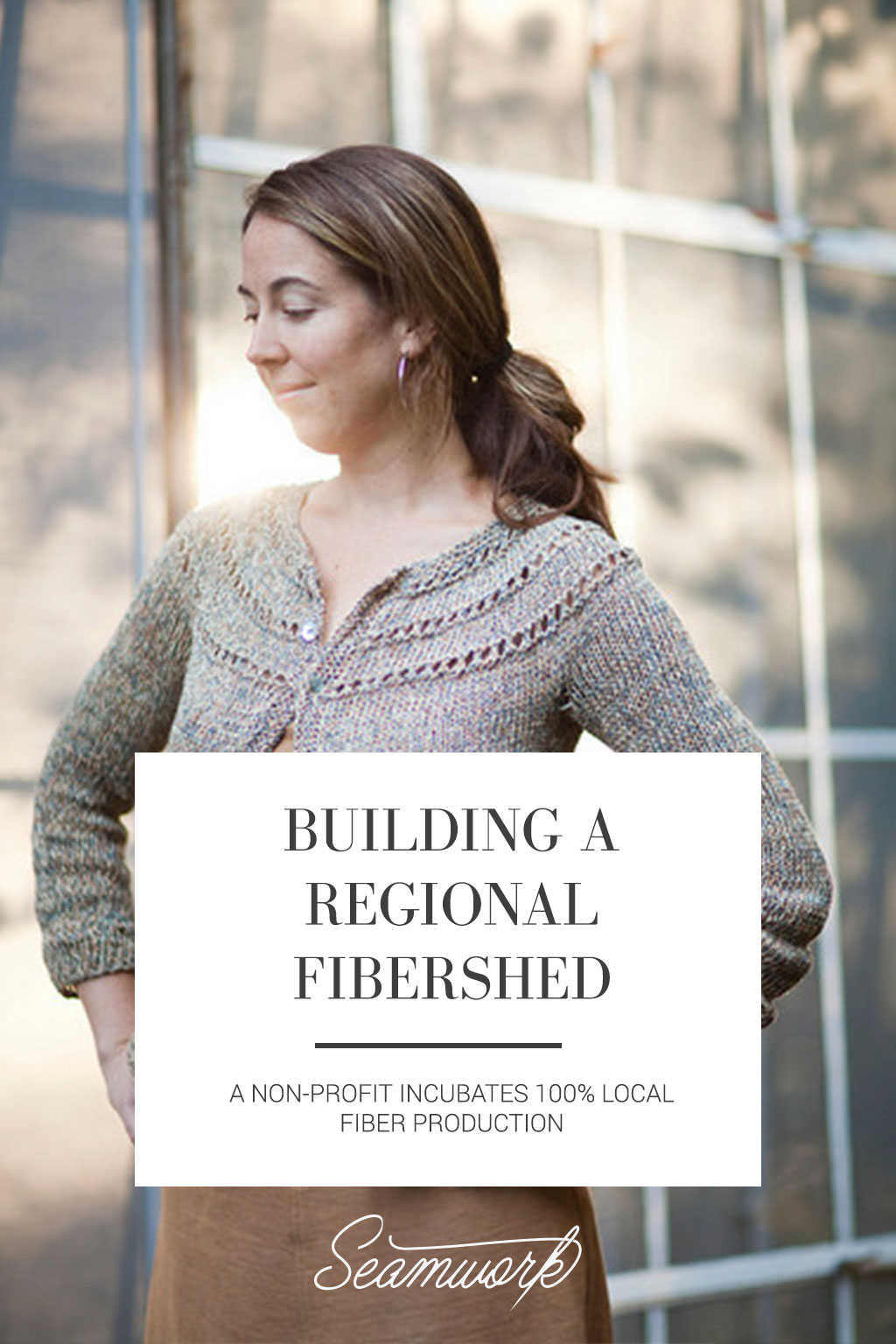