Ever wonder where your weekly Snippets newsletters come from? Who’s behind the camera on our YouTube channel and posting to Instagram every day? It’s Meg and Sienna! We’re currently a duo who spend our days producing content for the magazine, newsletters, and social media. 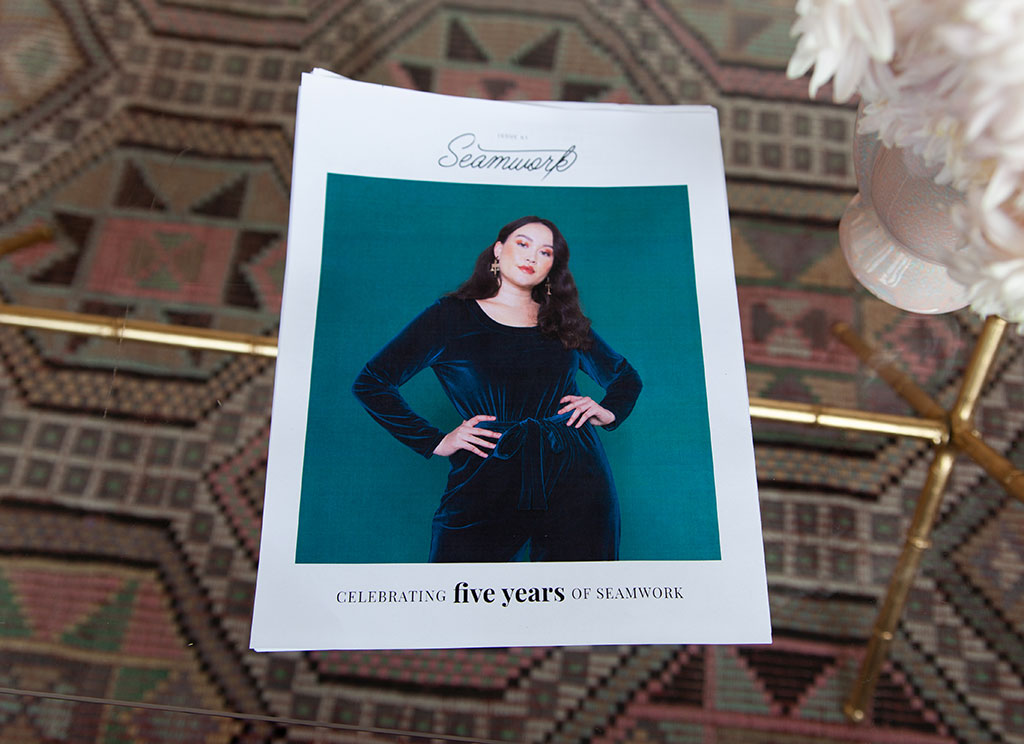 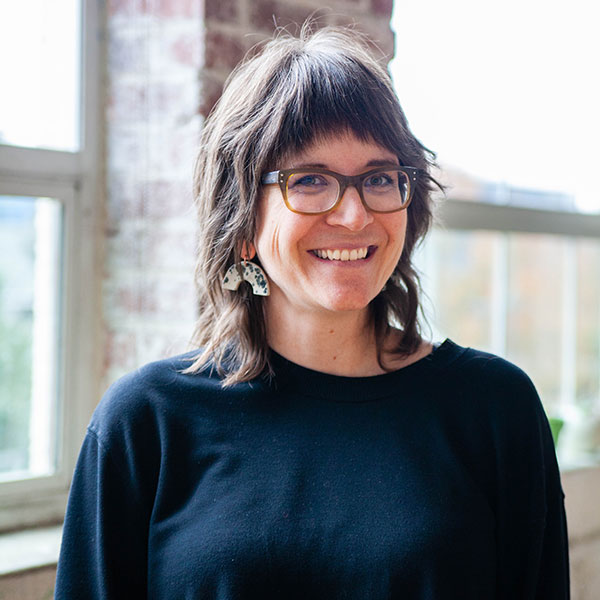 Must-have sewing notion: I use Wonder Clips instead of pins—they’re cat and kid-proof, and they don’t poke holes in my fabric or fingers.

Favorite piece of advice: Whenever I felt timid as a kid, my mom would say, “Nothing ventured, nothing gained.” And what do you know? It applies to sewing, too.

I’ve always been fascinated with how written publications are created. I love to read the names of contributors in magazines because you get a sense of the many different personalities—and their many hours of work—that contribute to a single publication. Here at Seamwork, I’m lucky to work with a small group of makers who are willing to drop what they’re doing to help create content, and it’s not unusual that one of our patternmakers will help me copyedit an issue!

My name is Meg, and I am the Managing Editor here at Seamwork. I started working for Colette Media a little over five years ago—a few months before Seamwork premiered, in fact. I was new to sewing, having just quit a master’s program studying speech language pathology to prusue a wild dream about becoming a tailor. I was hired at Colette to ship patterns and answer emails, and my first project was helping to pack up the studio, move it across town, and set it all up again before the first issue of Seamwork hit the world. Since there were only three additional people on the Colette team at the time, I quickly picked up more responsibilities. Now, I spend most of my time putting together fun ideas for content, in the magazine, social media, emails, and the Seamwork community.

Here at Seamwork HQ, we love processes. We all center our work on your feedback, which informs our design cycle, the order of operations for patternmaking, and our content creation. Since I spend a large part of my day reading your emails, comments, and suggestions, I’m in a fun position to pitch your ideas and then help make them happen. Here’s how that works! 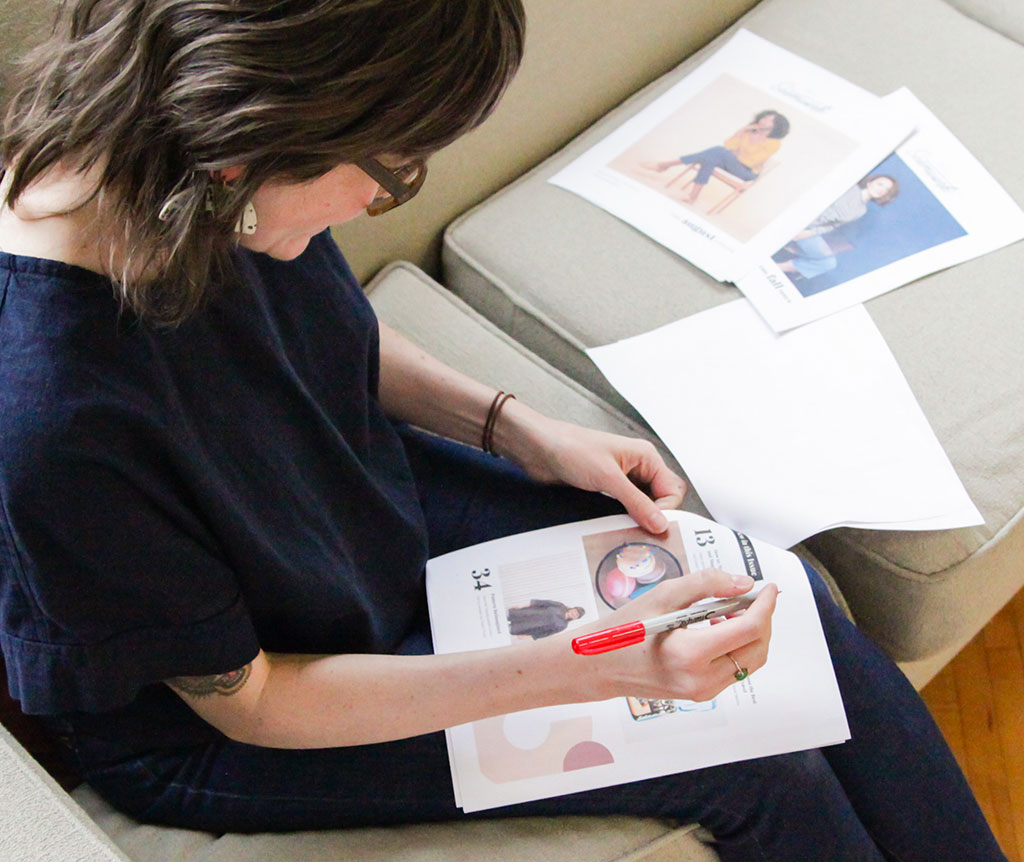 Making an Issue of Seamwork Magazine

At the start of each month, there will be a new issue of Seamwork up on the website. So no matter what, there’s a firm deadline for the magazine. The day before that issue goes live is what we affectionately call “Seamwork eve,” and even though we’ve done it 61 times already, it’s still an exciting, fast-paced, and slightly nerve-wracking deadline day.

We start thinking about ideas for articles, tutorials, Snippets, emails, and social media posts about six months in advance of a pattern’s release, which gives us time to work with writers, sketch out any step-by-step tutorials, and make sure we have content that supports the patterns that will be released that month. 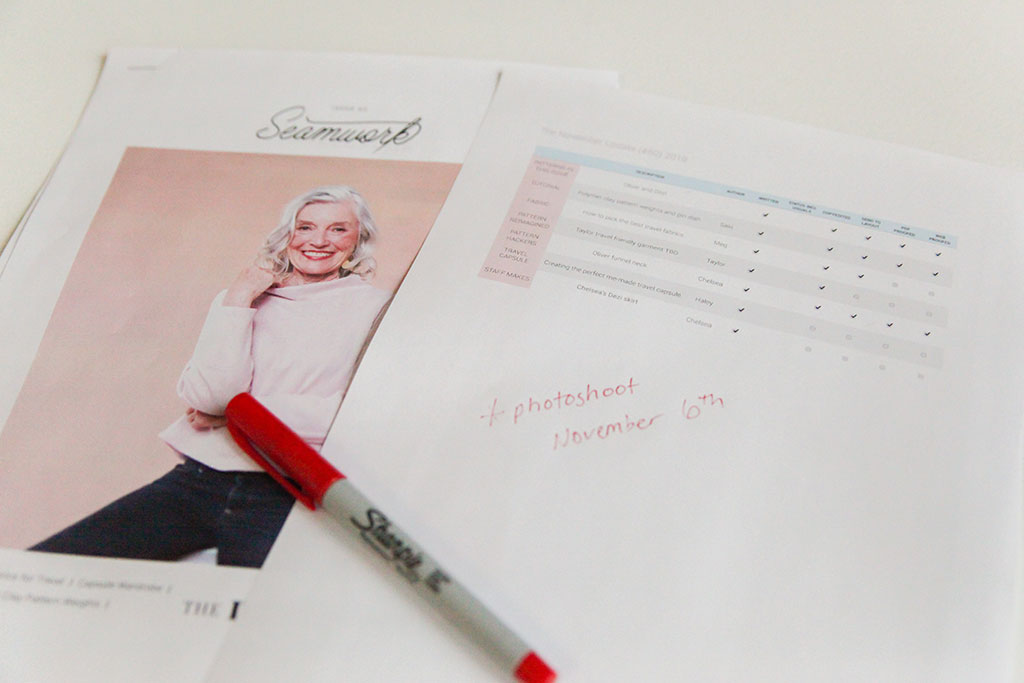 At about two to three months before the release of an issue, I create a formal story budget—which is a fancy term for a table of contents—and the real work begins. Writing is submitted, pictures are taken, everything is edited, and I pass the whole package to our talented graphic designer who takes my plain text documents and magically turns them into colorful web articles and a super engaging PDF for you to read each month—to read more about that process, check out the team behind the screens here in this issue!

Our monthly magazine has taken on many forms throughout the years, and it will continue to evolve for as long as you keep sending us your ideas and feedback. The final and most exciting step in the magazine production process is to listen to your reaction. Did you like a recent tutorial? Do you wish there were more pictures? How many typos did I miss? I go out and get these answers directly from you and then take the lessons I learned into the next month’s issue. And the cycle repeats! 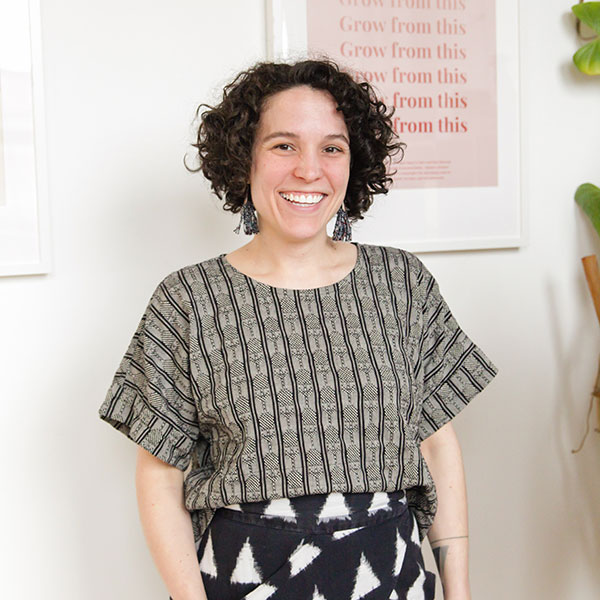 Must-have sewing notion: My 28mm rotary cutter. I bought it for curves, but now it’s the only rotary cutter I use.

Favorite piece of advice: The best sewing advice I’ve ever been given was from a non-sewer. Anytime I focus on a flaw in a garment I’ve made, my husband says, “No one but you will notice that,” and he’s probably right.

My name is Sienna, and I recently joined the Seamwork team after nearly a decade of teaching visual art in public schools. My sewing obsession began shortly after I added it into my teaching curriculum, discovered indie pattern companies, and found the growing community of sewists online. Although I loved providing a creative outlet for kids, my sewing practice became all-consuming and, lucky for me, Seamwork brought me on as a Content Producer in July! I work with Meg to manage the social media accounts and with almost everyone on the team to film and produce video tutorials. 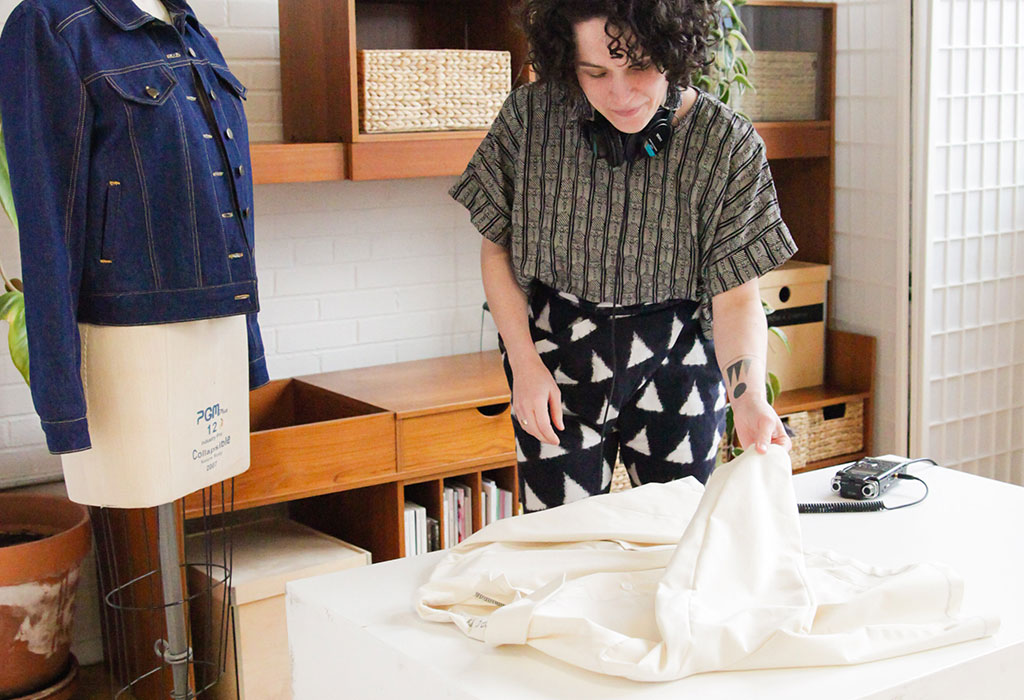 The video process starts with the Seamwork community. Whether it’s a technique, a quick tip, or a full sewalong, we first look to the community to see what folks are itching to learn. From there, I’ll write a script with whoever is appearing in the video and create a storyboard. Then the creative team will review and give feedback. It’s a very collaborative environment, and it’s exciting to see how much sewing knowledge is swimming around in everyone’s heads. Once the script and visuals are finalized, I’ll prepare the necessary materials and schedule the shoot. 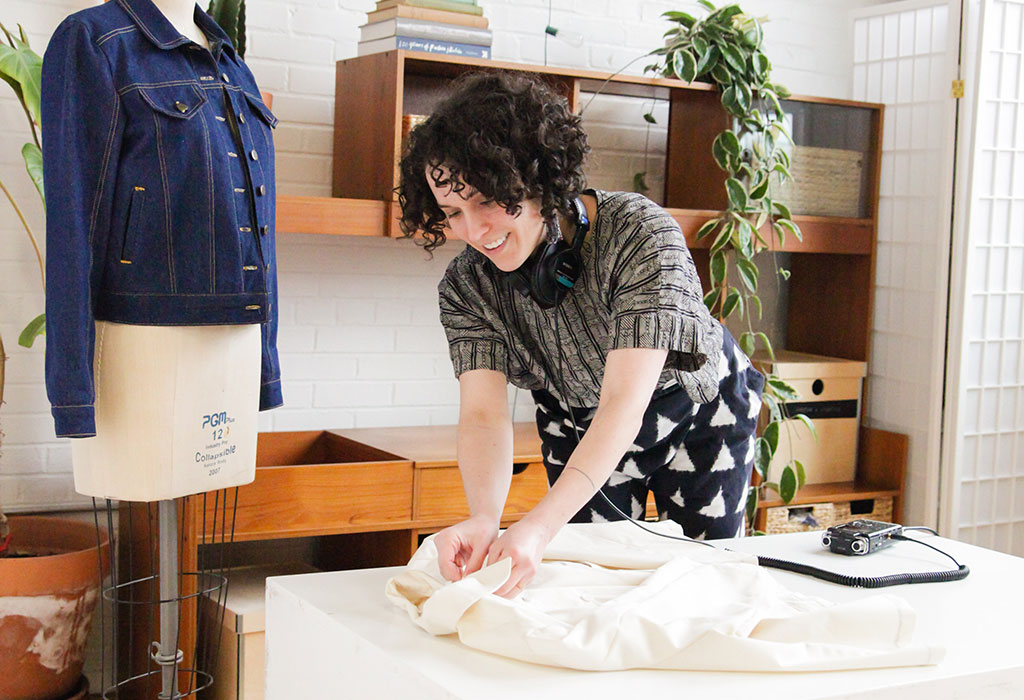 The Seamwork office doesn’t currently have a dedicated video and photoshoot space (it’s happening soon!), so the day before we film, we prepare the space and set up all of the equipment. There are three setups for most videos: overhead, talking head, and machine. On larger projects, like the Audrey class, we’ll film all of the overhead and machine sections first, and the talking head and voiceover portions last. That way, we can make any necessary changes to the script if we discover a better way of doing something. 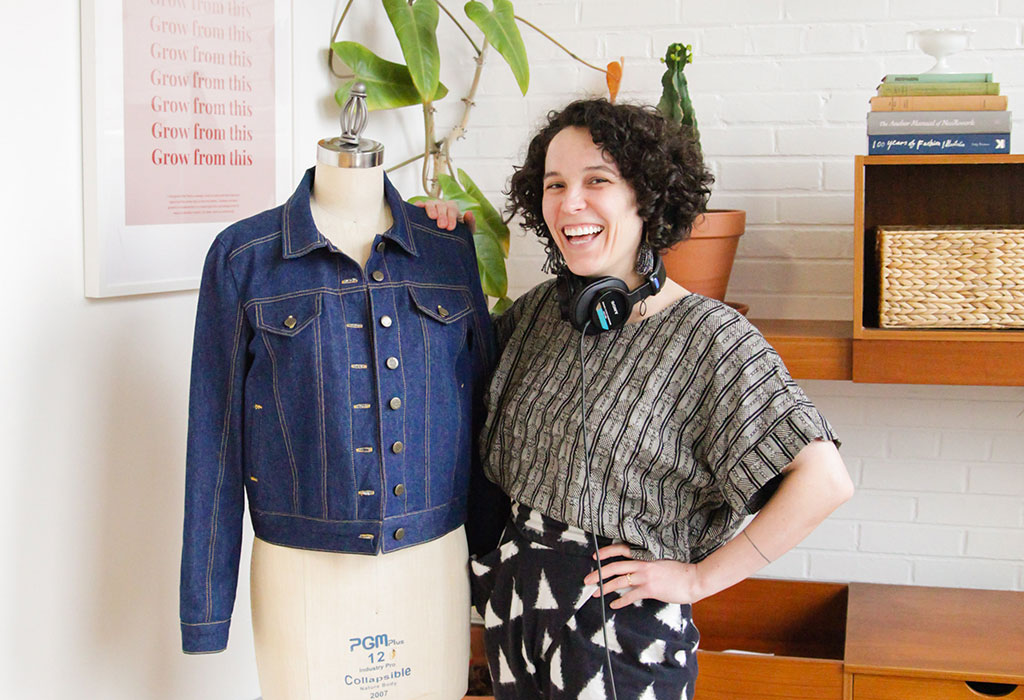 Once everything is filmed, I’ll organize the media on my computer and begin editing using Final Cut Pro X. Editing is one of my favorite parts of the process; it’s like an audio/visual puzzle. Before uploading the video on YouTube, or on the Seamwork Classroom, I’ll get feedback from the team. After final tweaks, I’ll upload it, create copy and thumbnail images, and edit the closed captions. 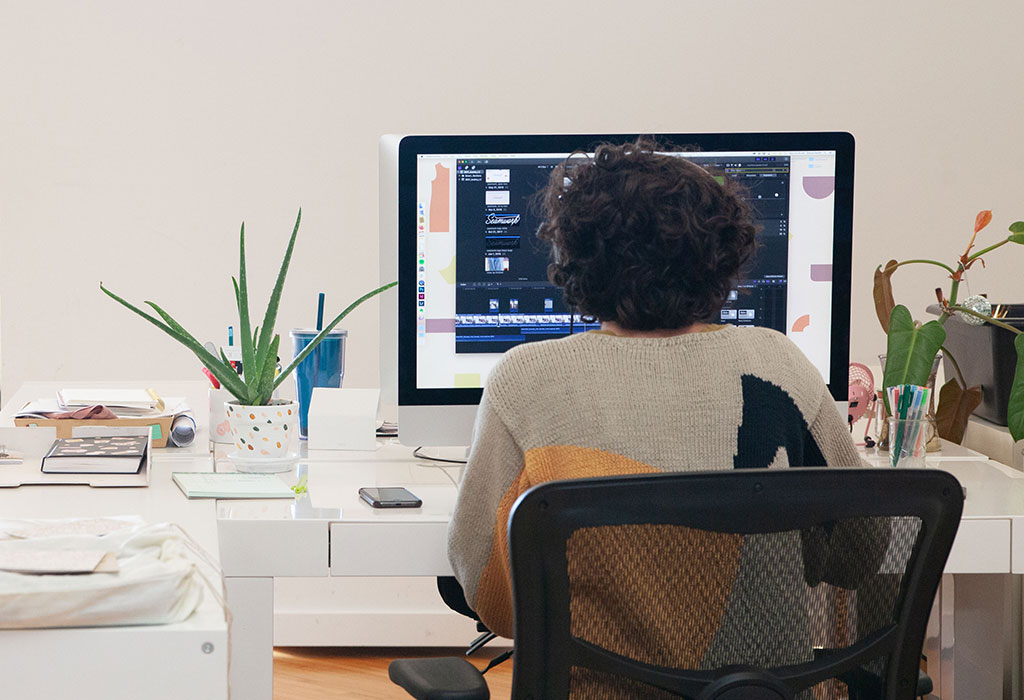 I love how this work combines teaching and sewing with plenty of opportunities for personal growth. What do you want to learn about? Let us know so we can turn it into a video! 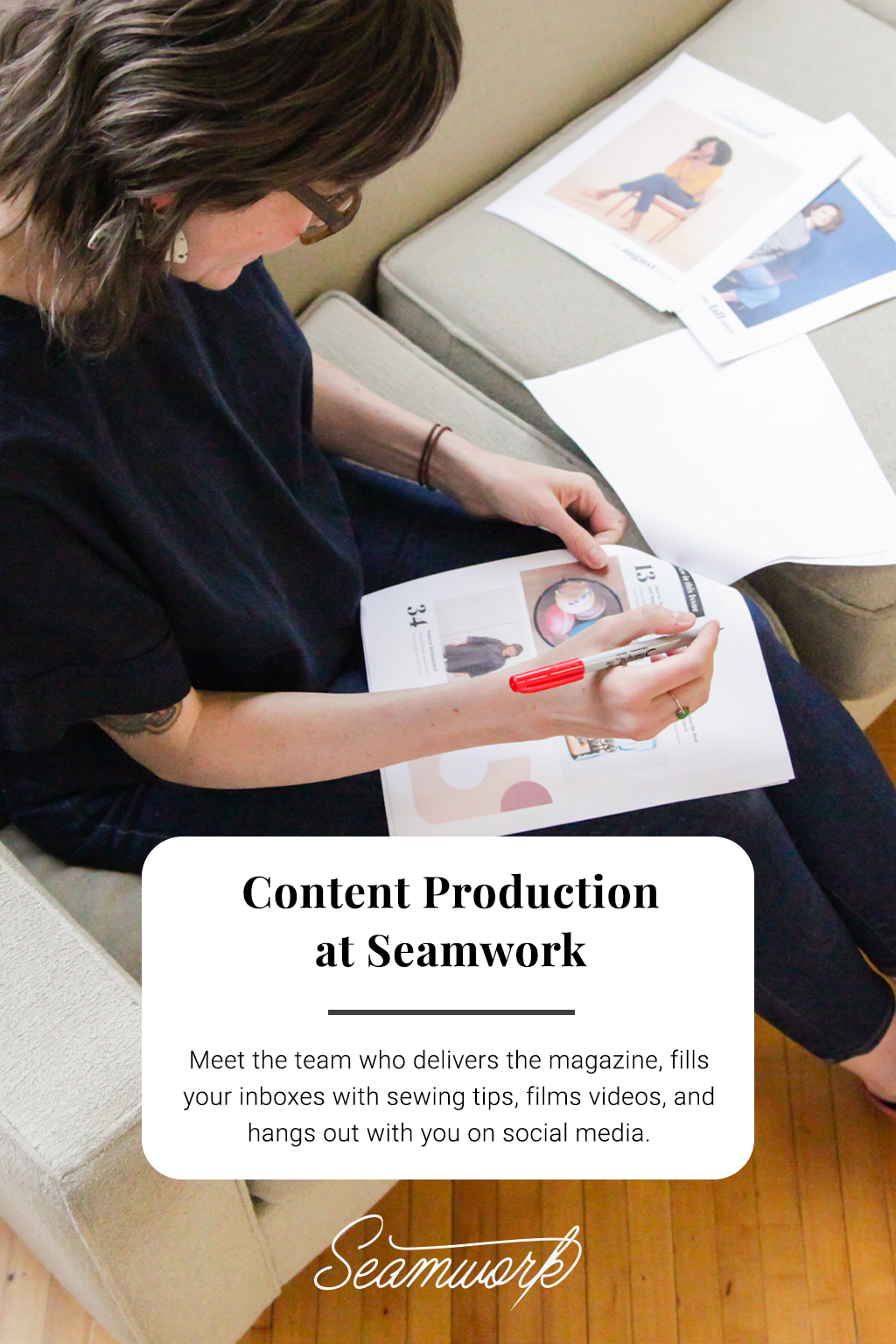