We all make mistakes when we sew. These mistakes can end in tears, a few curse words, or tossing a project in the bin, but we still find ourselves back at our machines, trying again.

The great thing about making a mistake when you sew is that you also often learn a lesson. Here are some sewing bloopers from the Seamwork community, and some lessons learned.

We’ll keep them anonymous to keep your secrets safe. Just remember, you aren’t the only one who has sewn your sleeves backward!

“The first thing I ever made when I was 14yrs old was a top out of a pair of curtains. I didn’t use a pattern just used another top as a template. I did a Vneck front gather detail which was supposed to have enough room to get my head through! After much wrestling, I got it on only to realize I couldn’t take the darn thing off not without ripping it to shreds in a complete claustrophobic panic.”

“I made my first knit dress shortly after learning to sew…directions said to “finish seam.” I had no idea what that meant and apparently didn’t think to Google it (this was 2010 or 2011, so I could have!) and just forged on. The seam in question was the center back of the bodice…I basically did a topstitch all along the seam but using a zigzag. It resembled some sort of scales or armadillo back ridge. Needless to say, I had to recut those pieces and got some clarity on seam finishing from Mom.”

When “you made this?” isn’t a compliment

“I was right out of college where I studied fashion design, visiting a friend who was just learning to sew. She had on a summer cotton dress with an armhole detail that stuck out all the way around her arm. I kept trying to figure out why it looked so strange. As it turned out, she didn’t know what to do with the armhole facings, so she just left them outside. I was too embarrassed for her to tell her to clip it.”

“I was fifteen years old and teaching myself how to sew. I had made a long straight skirt, with a kick pleat extension and a zipper, and was super proud of myself. Being anxious that the stitches weren’t strong enough, I had topstitched and backstitched everything. EVERYTHING. Many times. So there I was, strutting my fancy new skirt at the mall as one did, and I hear a woman bellowing at me across the crowded food court. I turned, waiting for a compliment on The Skirt but instead heard the dreaded, ‘Hey girl, you make that yourself?’ Yep. Obvious from a distance.”

“I did once sew my finger to a garment and only realized once the needle broke off because it was stuck in my fingernail. Definitely a blooper. Not sure it’s funny.”

“Telling my daughter to be careful when sewing and then showing her how and sewing my finger. Told her that she needs to focus and watch where she was sewing, not like granny.”

“When I was getting my garment portfolio ready to submit to the professors and the dean of UW-Madison for entrance into the Fashion Design extension program at the Fashion Institute of Technology in New York City, I accidentally cut a hole in the front of my garment with the serger. I was mortified and was sure I would not be accepted into the program because of it. I mended the best I could and attached a note explaining what happened. After they reviewed my portfolio, they wrote me a note back saying that I was accepted and they understood that mistakes happen. I was so happy! The moral of the story is, don’t be afraid to make a mistake. We have all done it, even the pros!” 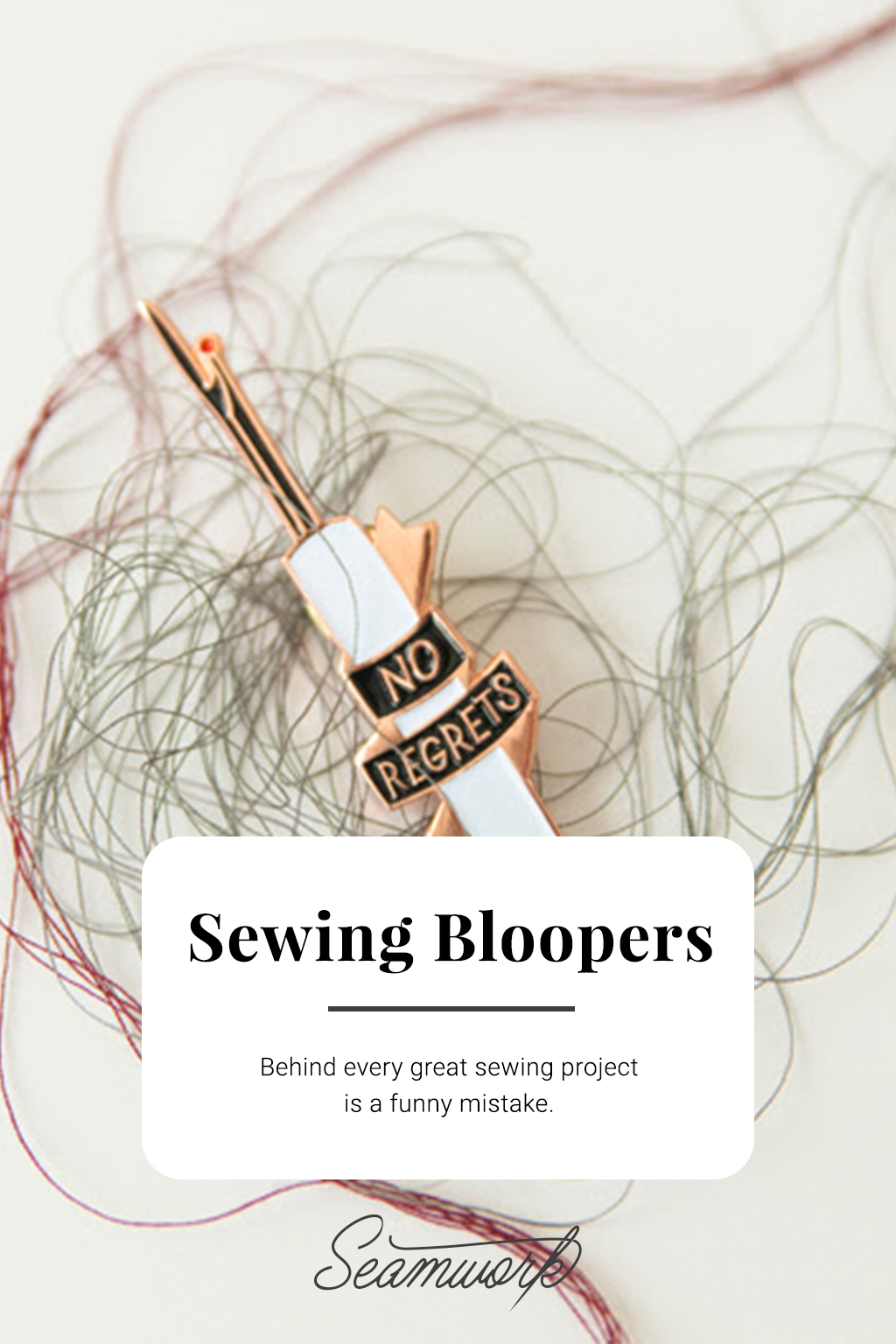