From quaint gardens to construction sites, coffee shops to outdoor barbeques, overalls have transformed themselves over and over to suit the needs of their wearers. Overalls originally began as utilitarian workwear designed for farmwork and fishing, but have become entrenched in American fashion, media, and culture. In true utilitarian fashion, their name is their purpose—overalls were designed to be worn over the wearer’s clothes to protect them while they worked. In modern times, overalls moved from workwear to casual dress, along with changes in fabric choice and design features. This garment has altered over the centuries to become a durable—yet fashionable—garment of choice. 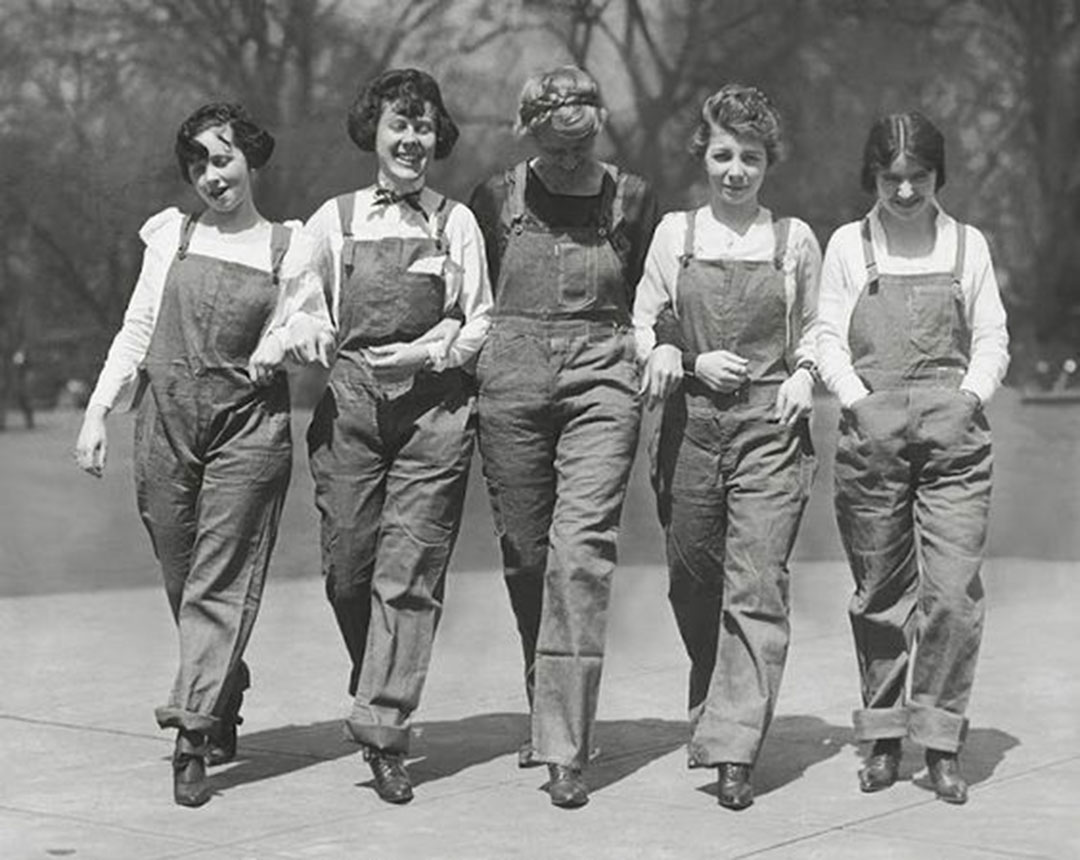 Anatomy of the Bib

The term “overalls” once described many types of garments, including undergarments and outerwear. Eventually, the term narrowed to bib overalls, or dungarees depending on where you come from, describing a garment with a bib attached to trousers. These are the overalls that most come to mind today.

Bib overalls consist of two main parts: the trousers, traditionally loose-fitting trousers, and the bib, which is a torso covering attached to the trouser portion. 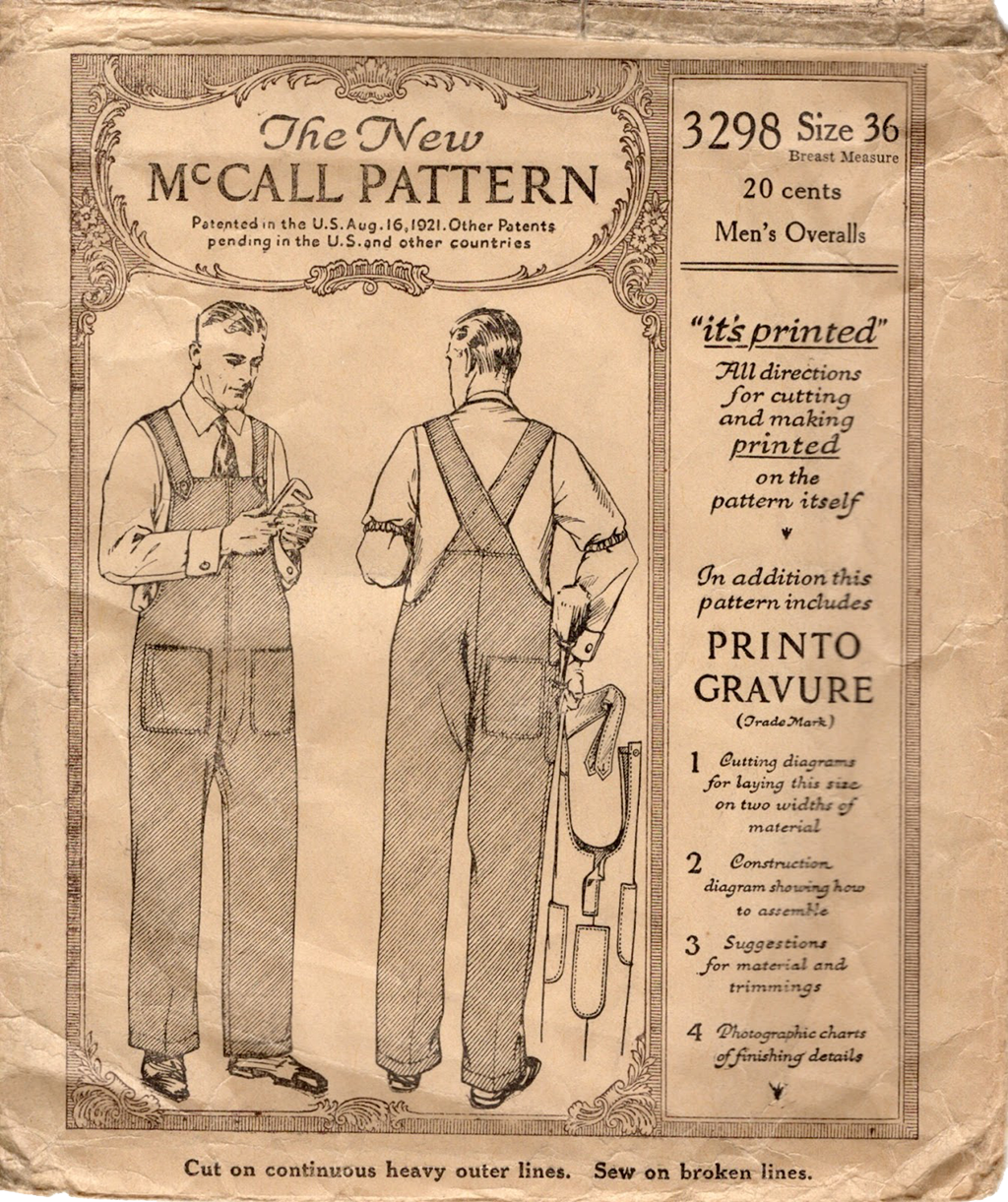 Throughout history, the bib portion of overalls underwent several alterations. Originally, the bib was designed as an extension of the leg piece, known as a continuous bib. This style was prominent from the mid-1880s through the 1900s. During the late 1800s, the bib was redesigned as a separate piece of fabric that was attached to the trouser portion of the overalls, known as a separate bib.

Overalls were originally made out of denim or heavy canvas for durability and function, or out of water-resistant or waterproof fabrics for fishing. Since they were considered strictly workwear for many decades, durability and comfort were the main considerations when designing overalls.

Up until World War I, overalls were mainly worn by men or worn as playsuits for children. But once women were required to enter the workforce to support the war effort, their everyday garments were deemed too dangerous for factory work, and a flurry of patents came about to create the workwear that women needed. 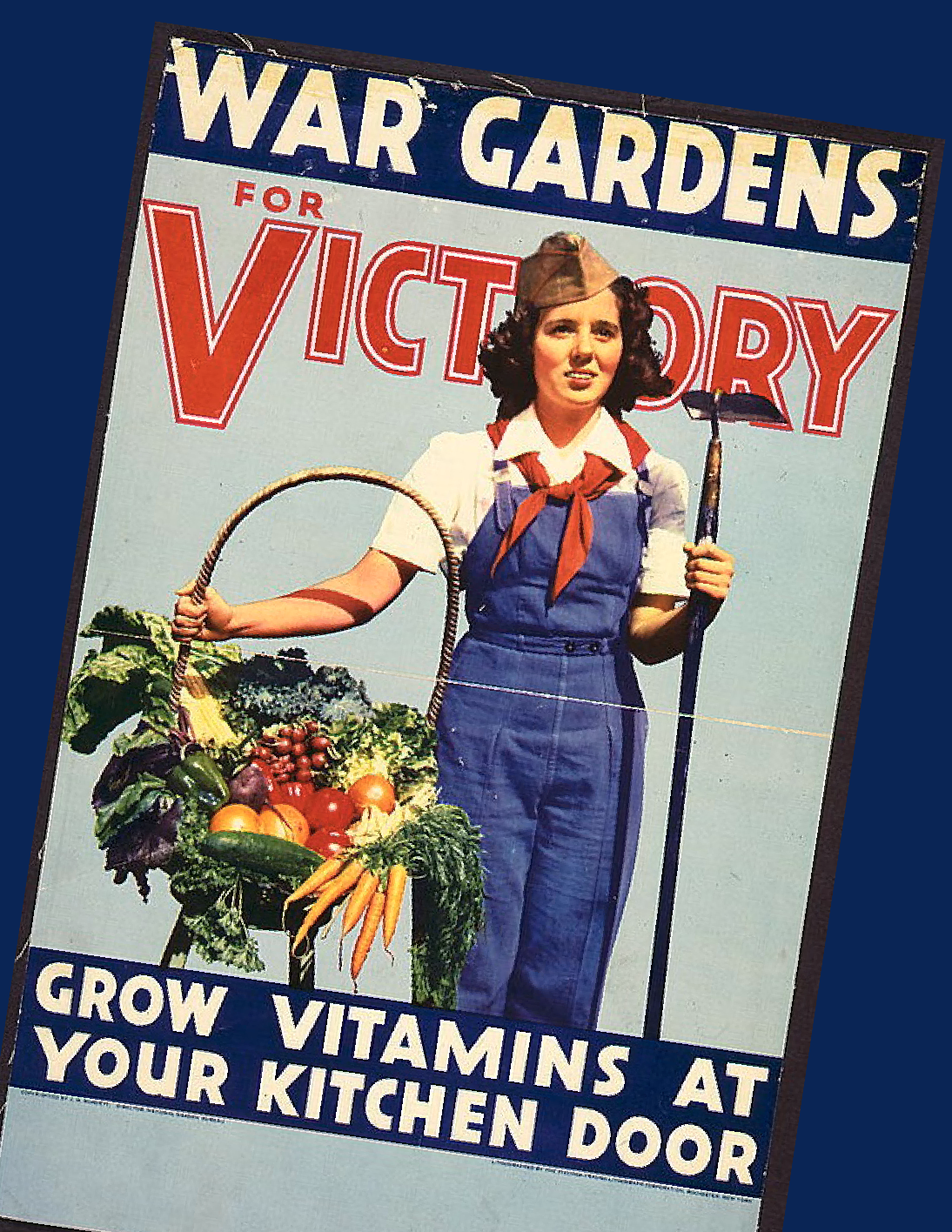 After each World War, more fashionable overalls for women would emerge. The practical design of overalls was adjusted to include sweetheart necklines, waist-cinching features, dainty pockets, and flared-leg styles, details more suitable for fashion over function. The more fashion-oriented overalls used lightweight cottons instead of denim or canvas, both of which were still relegated as workwear fabrics. The delineation of workwear and fashion overalls has continued until today. You can still buy durable overalls for work made out of duck canvas or heavyweight denim, but you’ll also find fashionable overalls in fabrics ranging from linens to lightweight denim. 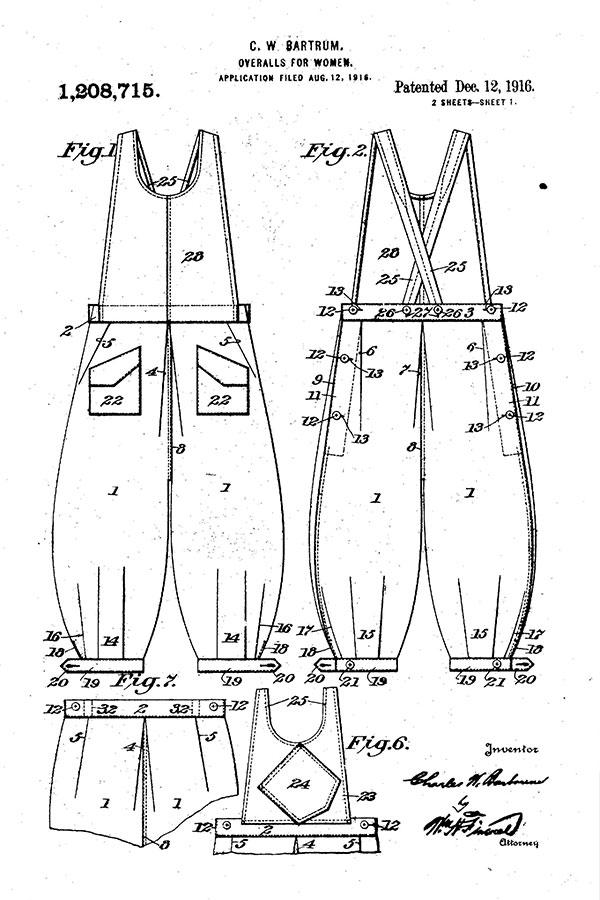 So, when exactly did overalls first come about? The first patented garment with rivets, what eventually became the iconic Levi’s 501 Blue Jean, was patented as overalls by Levi Strauss & Company in 1873. This was one of the original patents for a mass-produced overall to exist. But Levi’s overalls were not bib overalls; they were simply trouser overalls, also known as waist overalls, worn over undergarments.

It wasn’t until the 1960s when baby boomers started adopting the term “jeans” instead of using “overalls” or “waist overalls,” that Levi’s 501s were differentiated from the term overalls.

To read more about the history of denim, read Blue Jean Queen in issue no. 8 of Seamwork. 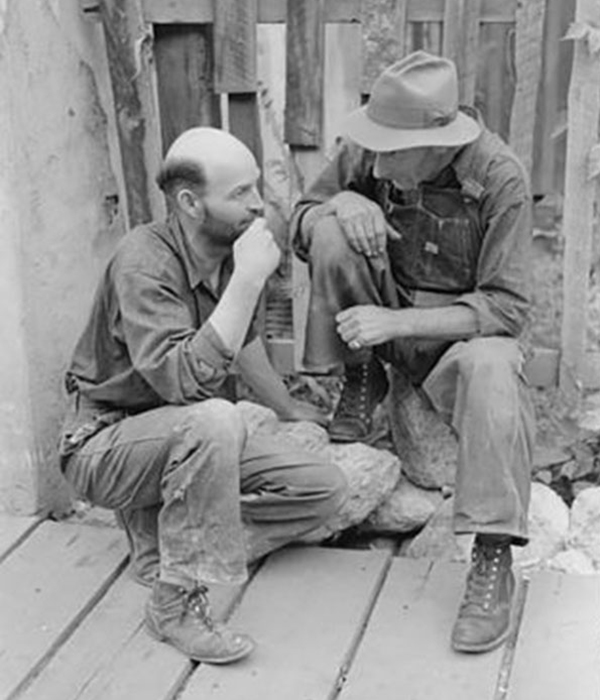 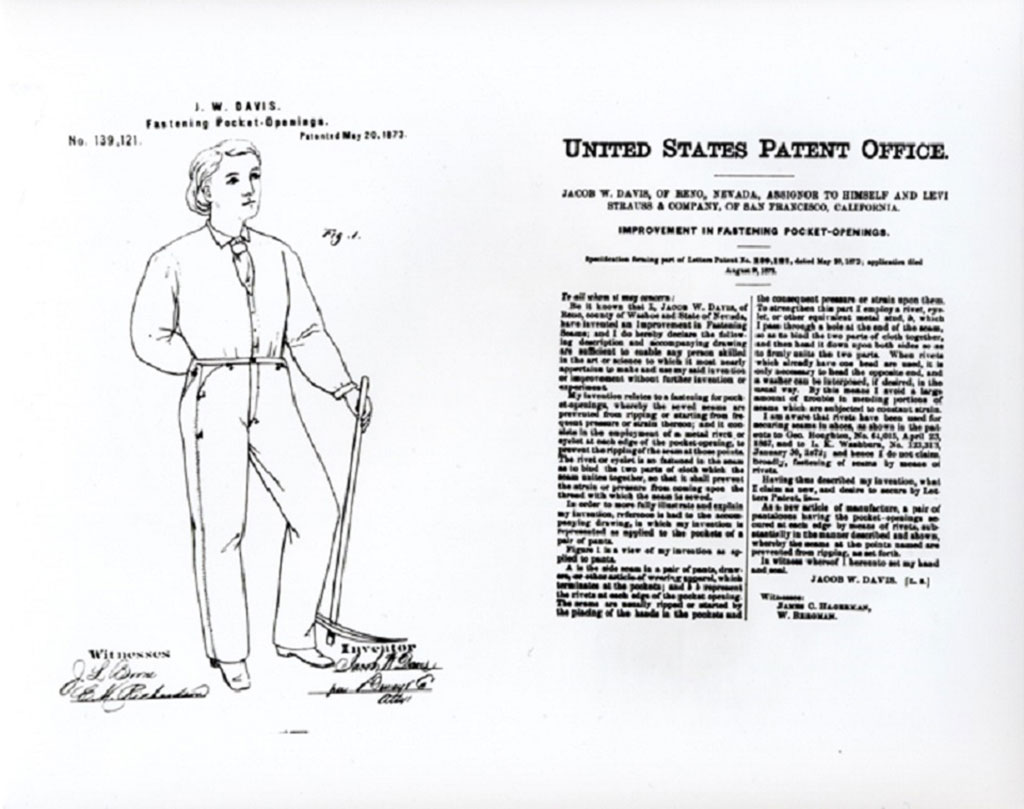 A patent from Levi’s.

Despite the patent in 1873, Levi Strauss & Company was not the original inventor of bib overalls. The first mass-produced bib overall was actually patented and produced by Lee Jeans in 1921. Bib overalls were being made before this patent by companies such as Carhartt, but Lee Jeans was able to patent the style first. These patents, however, came about long after overalls were regularly worn. 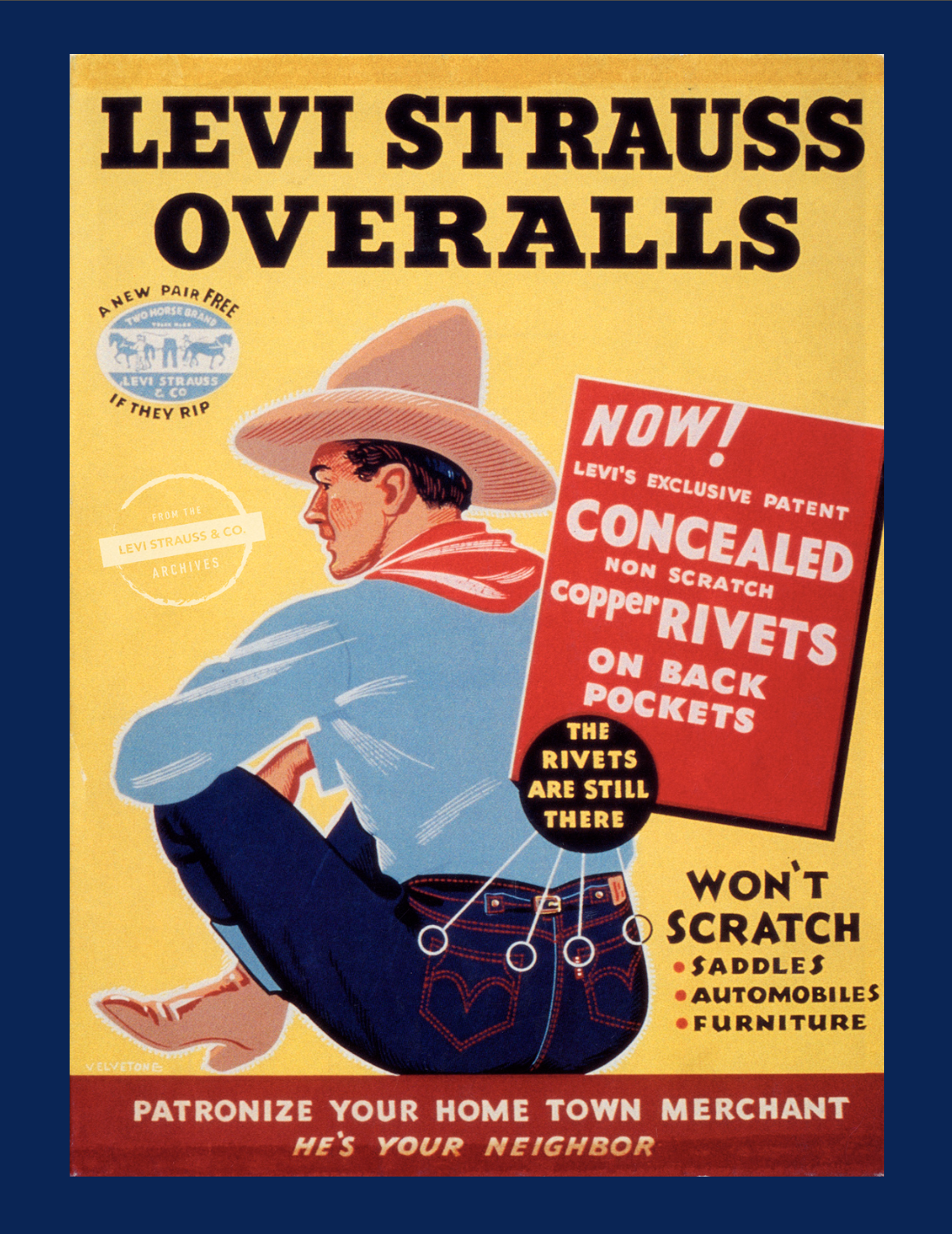 There is no evidence of a single inventor of the bib overalls and no specific date when they first appeared. There is evidence that overalls were used as far back as the late 1700s as a protective garment made out of denim and were regularly worn by enslaved people. Denim was used partly because the material was sturdy, and partly because it was a stark contrast against the linen suits and lace parasols of plantation families.

Aside from durability and practicality, denim overalls were used to visually delineate between race and class. After the Civil War ended and the Emancipation Proclamation made chattel slavery illegal in the Confederate States, sharecropping became the new norm. Denim overalls were regularly worn amongst sharecroppers and further continued the negative perception that denim overalls were for Black Americans and poor white Americans. 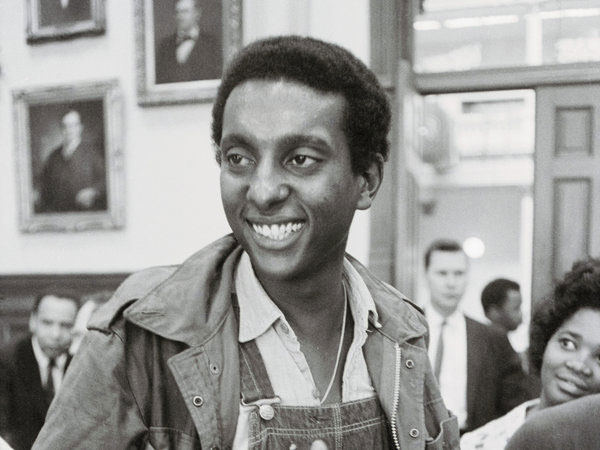 Stokely Carmichael, a philosopher with the Black Power Movement, in overalls. Image from NPR.

Aside from durability and practicality, denim overalls were used to visually delineate between race and class.

With the sharecropping history in mind, civil rights workers in the 1960s used denim overalls—which were still heavily associated with sharecropping—to symbolize how little had been achieved since reconstruction. In the beginning, civil rights activists wore overalls out of practicality—they were tired of mending tears from attack dogs and high-pressure hoses, and denim could withstand the abuse. However, wearing denim overalls as a sign of protest was not fully implemented by activists.

Respectability politics—the idea that Black protesters needed to be clean-cut and dressed in their Sunday best—created a divide amongst activists. It was thought that protesting while well-dressed would elicit a more positive response from white oppressors. However, being well-dressed was not solely a modality for protesting white supremacy. Presenting as well-dressed was a survival tactic adopted by Black individuals to try to deter violence from white supremacists during their day-to-day existence and thus extended into tactics used during protests. Activists used both modalities of dress—suits and denim overalls—to appeal to their targeted audience.

What we think of as the classic Levi’s jacket today was introduced as a new style in 1962, but poor sharecroppers in the Deep South had been wearing it for decades. “The connection to the rural, back-to-the-land working class of the sharecroppers inspired, in some part, the all-denim, top-to-bottom look that hippies ended up wearing.”

Denim overalls didn’t just stand in as a symbolic expression. By donning denim overalls, activists were able to connect with working-class Black communities to help register them to vote, which in this time was to risk losing your life to vote while Black. By wearing overalls, activists could reach these communities and overcome the class divide that those clad in penny loafers couldn’t do.

Denim was the look of the Civil Rights Movement that held profound symbolism for the Black freedom struggle. To wear denim was to directly and visibly protest white supremacy. Denim’s subsequent introduction into the mainstream, marketed as a fresh and casual young look, purposefully erased the meaning and the discrimination faced by civil rights activists who wore denim overalls. “The Trucker coat that Levi’s introduced in the 60s at the height of the hippie movement was a throwback to the denim bond jacket style that the working and sharecropper class had been wearing for decades,” says James Sullivan, author of Jeans: A Cultural History of an American Icon. What we think of as the classic Levi’s jacket today was introduced as a new style in 1962, but poor sharecroppers in the Deep South had been wearing it for decades. “The connection to the rural, back-to-the-land working class of the sharecroppers inspired, in some part, the all-denim, top-to-bottom look that hippies ended up wearing.”

Overalls as a Trend 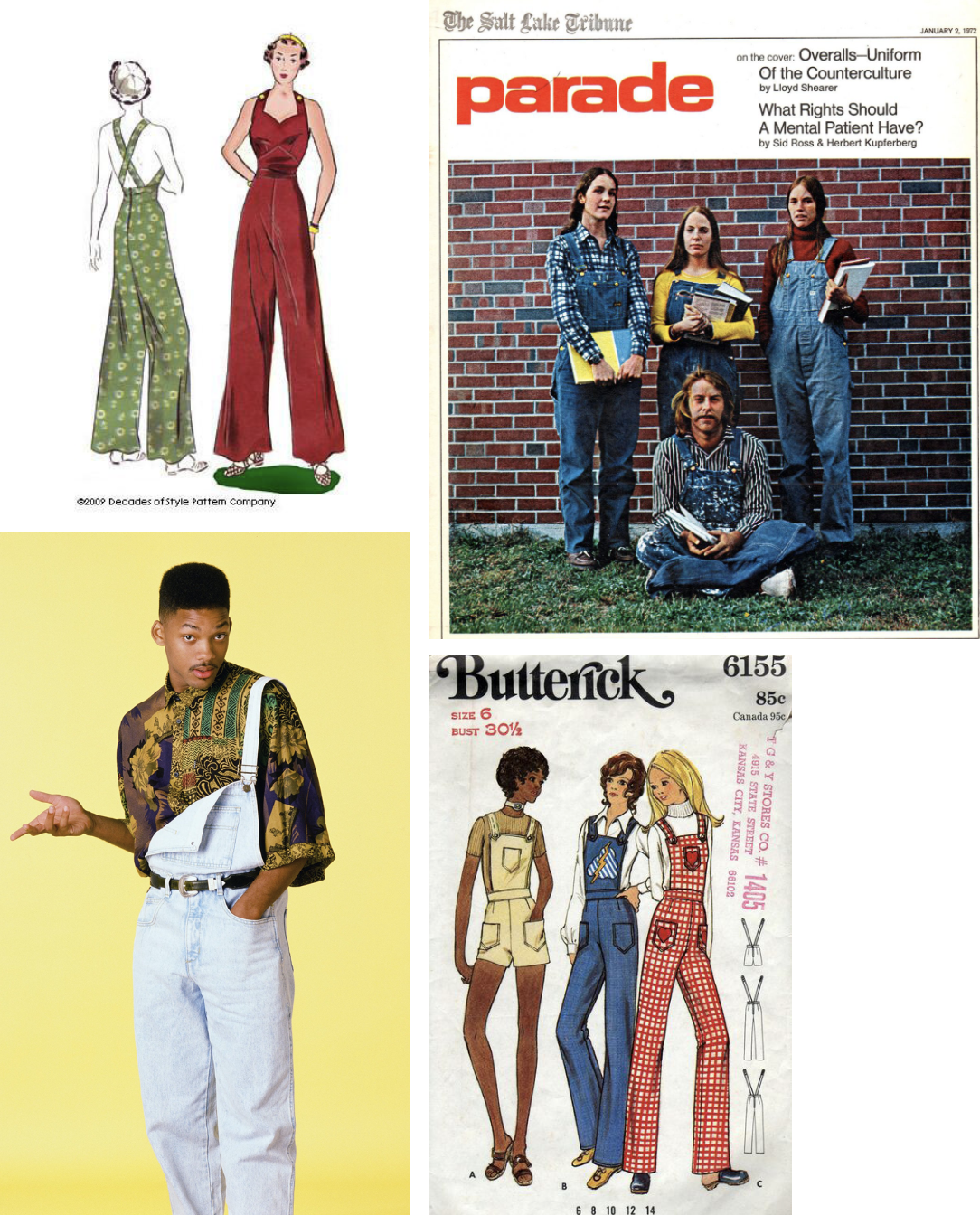 Image Sources: from left to right

Overalls in the 1970s. Image from Flashbak.

Actor Will Smith in overalls in the 1990s. Image from NBC via Getty Images.

Butterick overalls from the 1970s. Image from Vintage Patterns Fandom.

The popularity of overalls has waxed and waned over the years. What do you picture when you think of overalls? For many of us, we think of hippies wearing bell-bottom overalls and rappers of the 1990s wearing overalls with only one strap fastened. Overalls have been with us not only throughout the decades but over the centuries. They’ve inspired countless other garments such as shorteralls, coveralls, and even our beloved jeans. They’ve been adapted to industry, casual wear, military use, cold-weather sports, and activism, recently making a comeback with many styles and patterns harkening back to the original vintage designs. Right now, you can see overalls inspired by 1930’s designs and overalls featuring a modern silhouette and flowy linens walking down the same street.

Overalls are a garment that keeps on evolving to meet the requirements and aesthetics of each generation wearing them. Who will wear them next? 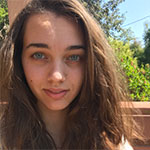 Riley is a sewing fanatic and lit-nerd. She wants to sew, knit, read, and write her way through life. She hopes to join others in the magic of creative expression and share her love of stories and sewing. You can follow her journey on Instagram @sewitsmeriley. 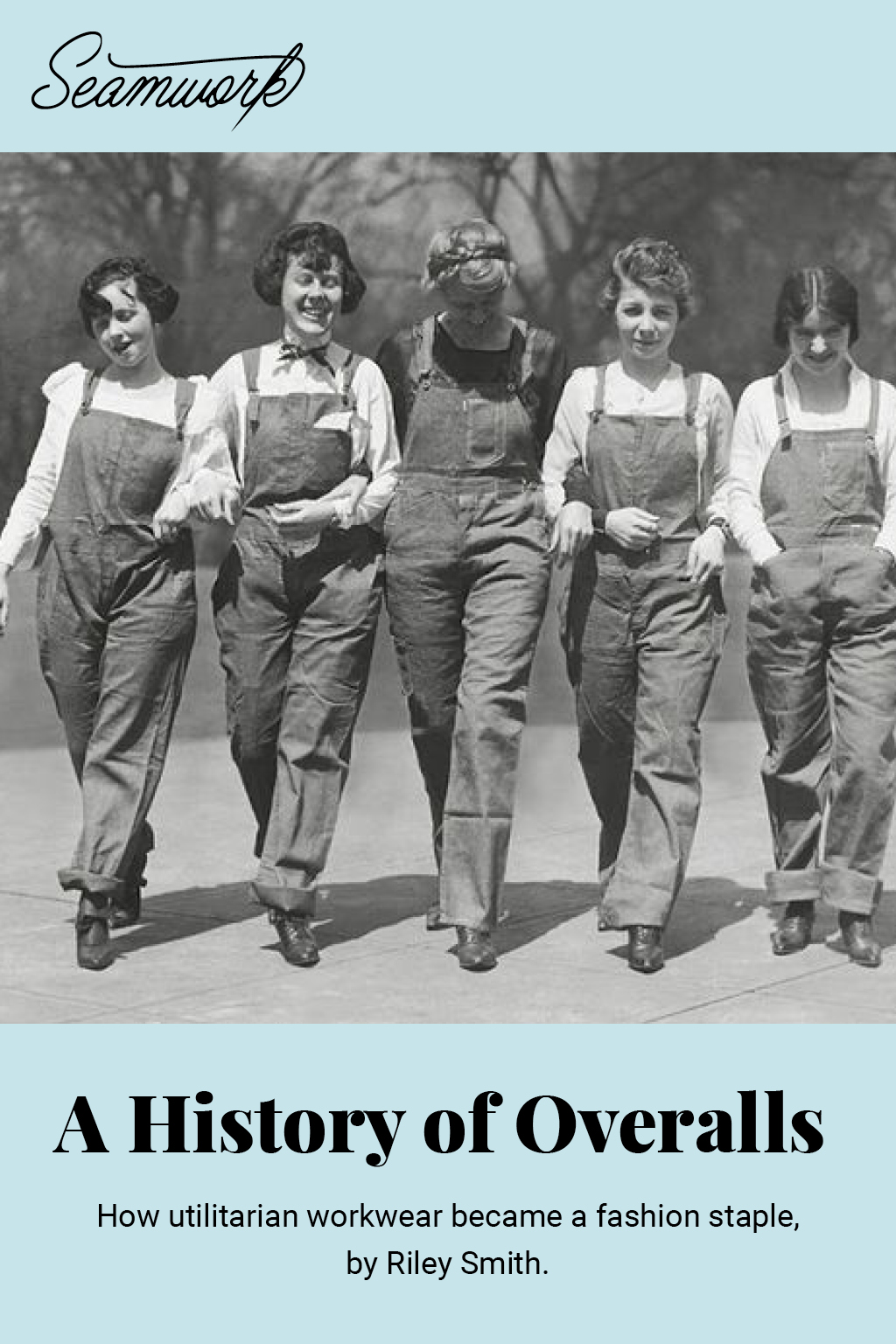