When I can’t sleep, I think about stitches. I imagine a strand of thread pulled through black cotton, like a water snake moving across the gleam of a river. The stitches march in a row of muscle memory that leads us back to an inheritance many of us have forgotten.

Growing up in South Vietnam, we had a black mechanical sewing machine in our house. It was a luxury back then, as well as a source of livelihood for many in our village. As soon as breakfast dishes were washed, someone was at the sewing machine, the thump of gears pacing a rhythm for our morning. Puffs of lint mixed with the yellow dust floating through our propped-open door, which let in the early morning breezes.

When I outgrew clothing, new ones sprang up in my drawers. The days were bright and my dresses even more so. 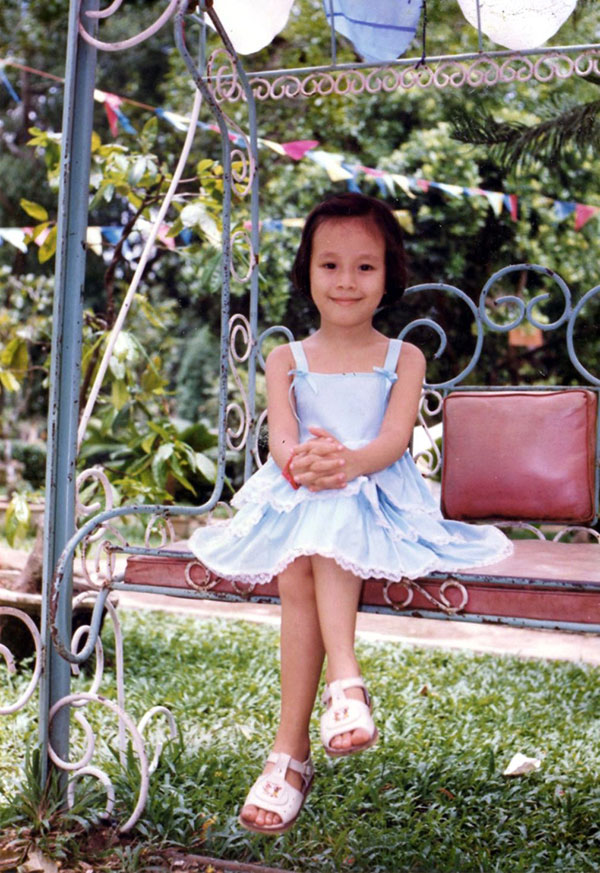 I came from a family of seamstresses—a whole country of them. If we needed new clothes, we made them or we bought them from a neighbor. Men and women slid into plastic chairs in front of their machines, kids undertow, sewing away to finish a garment before dark. Mending and creating and sustaining their love.

My grandmother owned a fabric store in the market. She filled it with bolts of creamy satin, rainbow-bright silks for ao dais, lightweight cotton for sleepwear. While she negotiated prices with customers, I hid under her cutting table and wrapped myself in the cool fabric. My aunt, who was a master seamstress, pilfered half-yards of the newest and most expensive fabric to sew me dresses that I would immediately dirty playing outside. But no one cared; we could always make another. My mother, too, had a weakness for chiffon and tulle when it came to my clothes. She sewed me a pale blue, three-tiered dress with lace trim that I wore in my last photo in Vietnam.

My aunt, who was a master seamstress, pilfered half-yards of the newest and most expensive fabric to sew me dresses that I would immediately dirty playing outside. But no one cared; we could always make another.

For a time, our wardrobes were crafted almost entirely by hand, each stitch placed by a relative, each piece of fabric hand-chosen for the recipient. The love was in the stitching. When I outgrew clothing, new ones sprang up in my drawers. The days were bright and my dresses even more so.

When we moved to America in 1990, for the bigger and better that every immigrant dreams of, the landscape shook into ranch houses with wire fences and strip malls named after Spanish conquistadors. My grandparents and my mother found jobs in a factory that manufactured boat covers. They sewed thick, waterproof covers all day and didn’t have the energy or desire to return to the sewing machine at home. The labor that once benefited our household was now packaged and sold to strangers. The beauty of craft became an afterthought.

As the years went by, my handmade dresses were replaced by whatever we found on the racks of JC Penney’s and Walmart. We still had a sewing machine, but it was rarely used. It was an anachronism, like the typewriter my grandfather bought at a garage sale and propped on his desk. 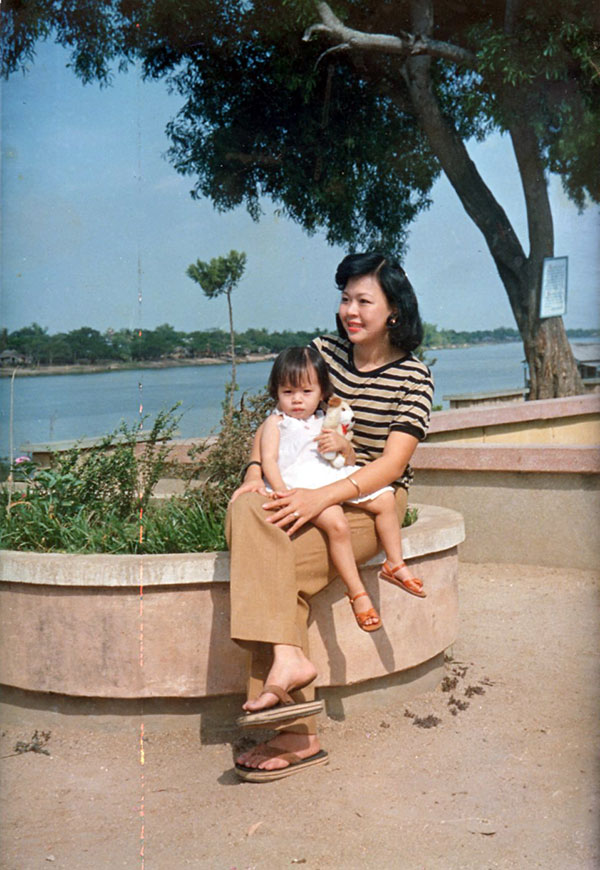 Especially as an immigrant, I longed for the world of ready-to-wear fashion, to be seen as unshakably cool. And I believed cool wasn’t something you could make—cool had to be something bought and paid for. 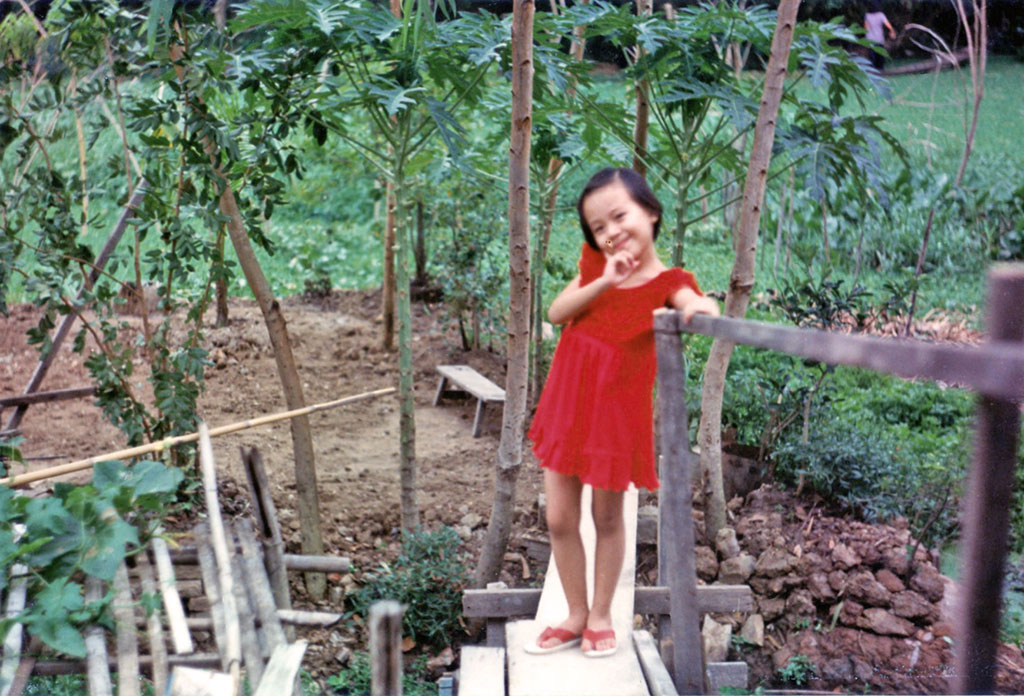 I was fine with that. I still loved clothes, but what I truly coveted were the vinyl-decaled statement tees the other kids were wearing or the crisp Calvin Klein crop tops with the giant labels on the front. When I reached the sullen teenage years, all I wanted was a pair of floor-grazing, wide-legged skater jeans. The ones that made your legs look elephantine and yet so sexy. Especially as an immigrant, I longed for the world of ready-to-wear fashion, to be seen as unshakably cool. And I believed cool wasn’t something you could make—cool had to be something bought and paid for.

My mother still sewed my pajamas. On the weekends, I’d sit cross-legged on the tile floor next to her while she traced out hand-drafted patterns on butcher paper, then cut them out with her huge silver shears. As I watched her at the table, her graceful hands guiding the fabric through her machine, I felt lulled by the hum of her sewing. When she shook out the loose threads and handed me my new pair of pajamas, I pretend not to care. But I loved the feeling of sinking into the softness of those pajamas at night, the fabric against my skin as soothing as a hug. 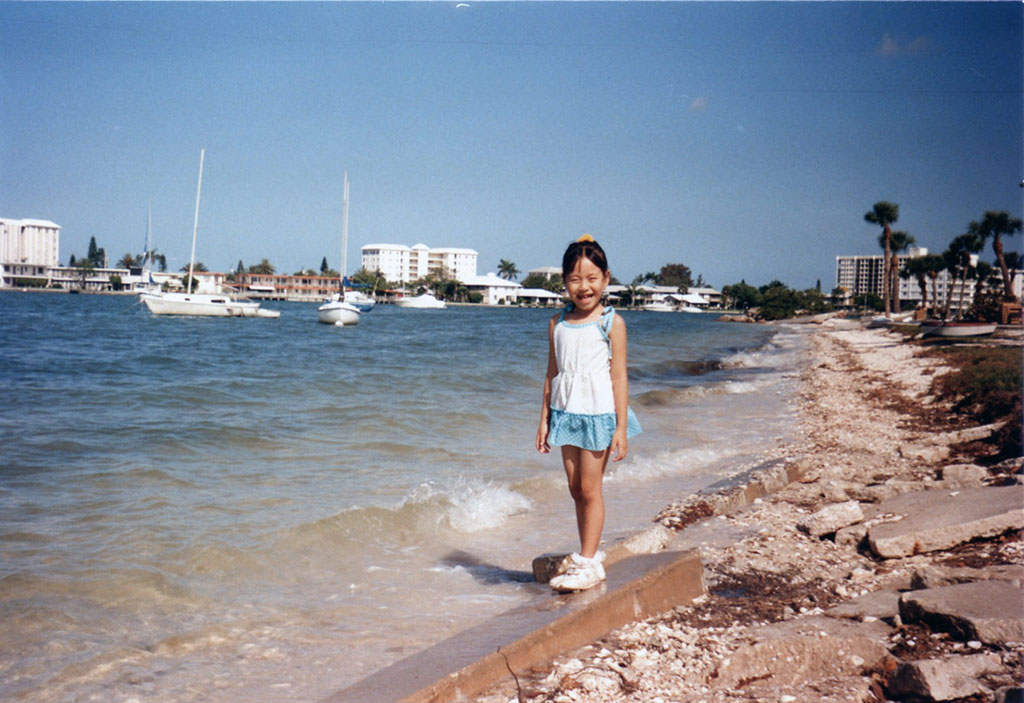 When I was ten, my mother gifted me a Singer machine of my own. It was ivory, with a handle for carrying, and a little screen that displayed all the available stitches. I think there must have been hope in her eyes when she watched me unwrap it. I don’t know what gift I’d wanted instead, but the machine didn’t hold any promise for me then. I saw it as a burden, pressure to become a version of myself I had disavowed. I was modern, I read YM magazine. No one sewed except grandmas and ladies from Victorian novels, and I was a cool kid.

The machine gathered dust, as my mother probably knew it would, yet when I went to college, I carried it with me. I drove with it six hours north to the Florida panhandle where it sat unused in a closet. Then, over the course of two decades, I packed it up with me to Chicago and Texas and Ohio, rarely questioning why I’d bother to tote a fifteen-pound weight that I never removed from its carrying case. Now, I understand that I was unwilling to let go of the heritage of that sewing machine, the symbol of longing it had become. Longing for a brighter and quieter life, where we weren’t all sprawled apart. Longing for the stillness of a mother bent over her sewing table. 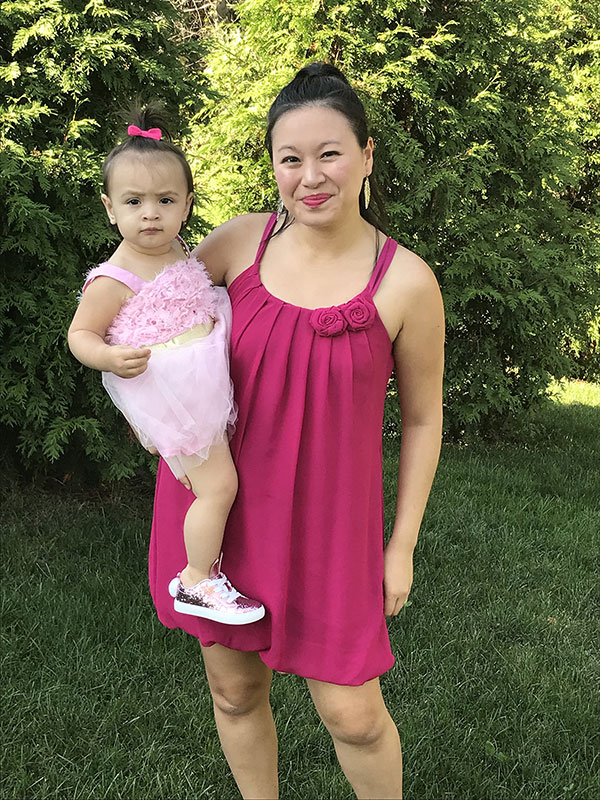 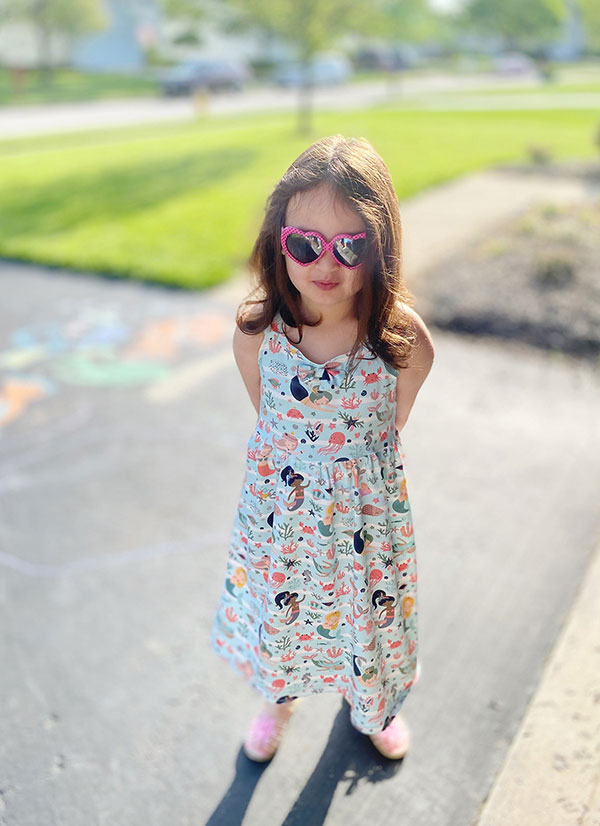 I wanted to do this too; I wanted to create for my daughter. I thought of the unused Singer and my early years watching my family sewing into the evening. Those images rooted in my mind.

The machine lay unused until my daughter was born. When she was just shy of a year old, I took her to the farmer’s market, bundled in blankets my mother crocheted. I paced among the first vegetables of spring and the jars of jewel-bright jams until I found a stand selling homemade playsuits for babies. As I perused the tiny clothing, all sewn in novelty animal and food fabrics, I held them up to my daughter so she could “choose.” When I saw her tiny hands reaching for the playsuits, something insistent ignited in me. I wanted to do this too; I wanted to create for my daughter. I thought of the unused Singer and my early years watching my family sewing into the evening. Those images rooted in my mind.

I had a startling amount of overconfidence when I first dove into sewing. I tried and failed to thread my old Singer from memory. So I took classes at a local sewing shop, where my teacher coaxed me to go slower, to pay attention to my stitches. I was so eager to get to the final product that I zoomed past the fundamentals. My mother and grandmother reminded me that they had to sew straight lines for weeks on scraps of muslin before their own teachers allowed them to advance. So I sighed and settled into stitching methodical lines, easing the pressure on my presser foot to a slower beat.

I began to trawl the aisles of fabric stores, not really knowing the difference between quilting and apparel fabric. I bought my daughter a simple A-line dress pattern with a Peter Pan collar. My first handsewn piece of clothing was that dress, full of missed stitches and strange gaps. It was too big for my daughter at the time, but I took pride in it. If you didn’t look too closely, it resembled an actual dress. I made more garments for her, until they actually did fit properly. For a family wedding that summer, I sewed her a ruffly pink dress with a gold waistband. My in-laws were so astounded and proud that I overheard my father-in-law bragging to his siblings, “She made that dress herself!” 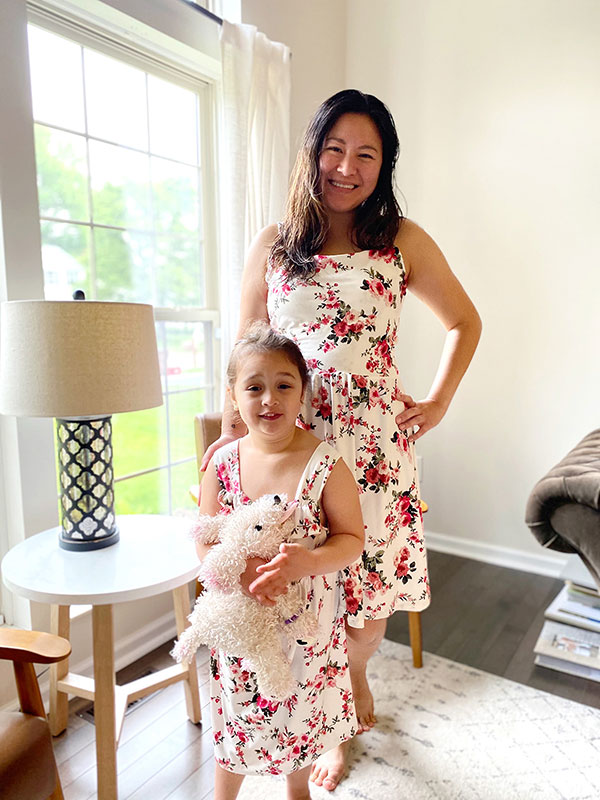 I felt an immense pride in my beginner’s sewing skills too, not only because of the practical novelty of it, but for the pride of connecting to something I thought was long lost. I was able to dip back into the river of history, to reclaim that which had always whispered to me as a memory. When I sent my mother photos from that family wedding, she wrote back, “You did it, girl!” Though I had so much to learn, she and the other women in my family never offered criticism or advice. They only echoed their encouragement, as bracing and steady as a needle slipping through fabric.

My daughter is four now. Over the years, the sewing machine has called to me periodically. Sometimes it lies dormant for months. Other times, I sew three or four things in a week, leaving colorful debris of thread and scraps around me. This week, I’ve been sewing matching rose-printed tea dresses for my daughter and me. A princess of pink and all that is cutesy, my daughter insists on being twins, and I’m all too happy to oblige.

As I begin to pin pattern pieces together, she sits quietly at my feet, tying fabric scraps into makeshift dresses for her dollies. I imagine all the small and important moments that have bound us all together as a family and as creators. We find our way forward through our hands, reaching into the waters of memory and shaping them into something new. Our histories are stitched through our longing for each other and its transformation into something as tangible as a handsewn dress.

Thao is a writer and designer living in Columbus, Ohio, with her husband and young daughter. She loves french fries and naps, and doesn’t quite understand why neither can be counted as hobbies. You can find more of her work at thaowrites.com. 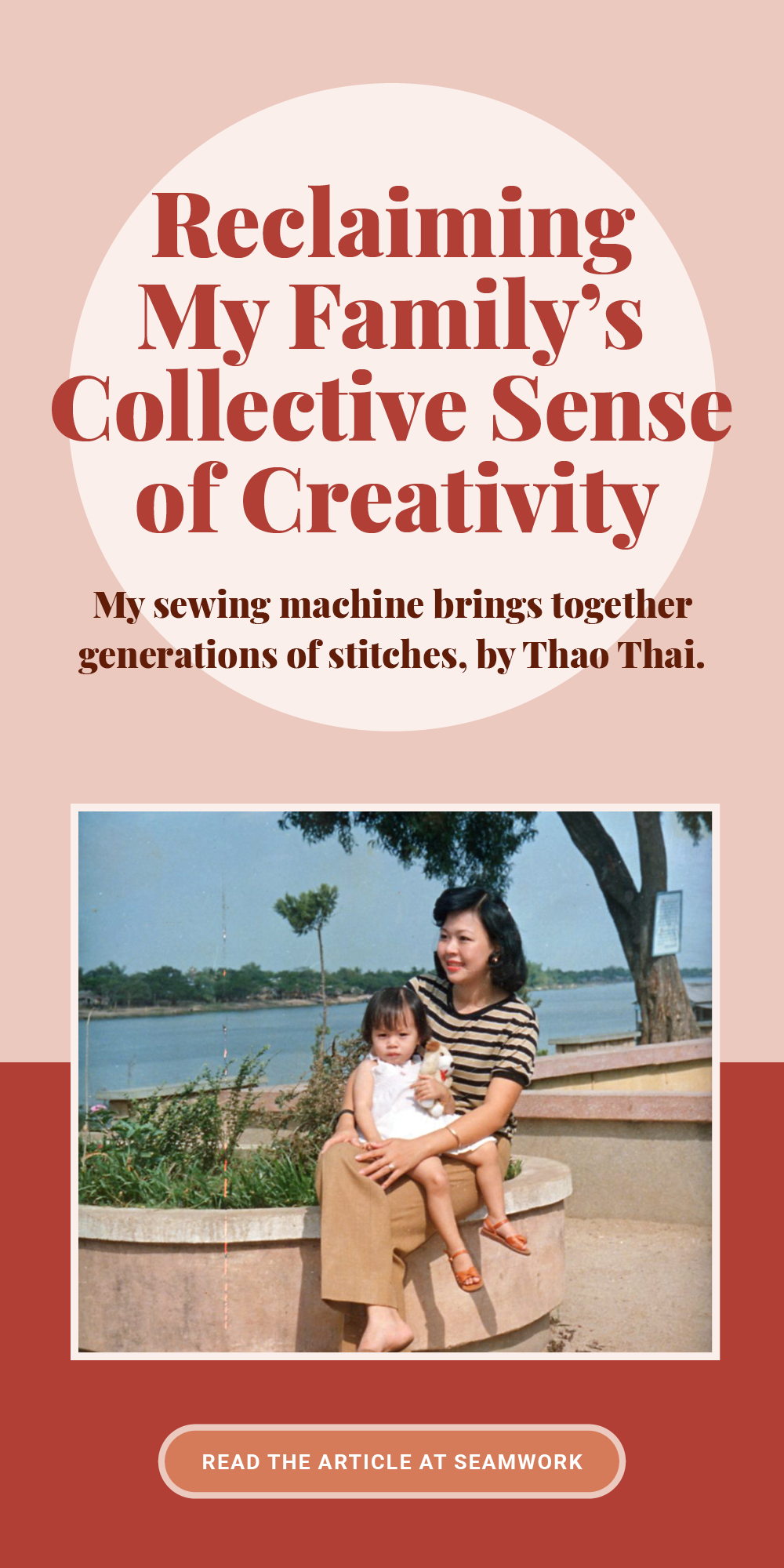