I’ve been a tailor and patternmaker for film, television, and theater for 30 years. Running the in-house costume-building shop for HBO’s Boardwalk Empire for four years—seasons 2, 3, 4, and 5—was one of the most demanding jobs I’ve had. Do you get stressed out fitting garments for yourself? Imagine fitting vintage garments that are falling apart at the seams for a show that will be watched by millions of viewers.

I’ll share some of the near tragedies that struck these precious vintage garments along with how we ensured they stayed camera-ready all season long. 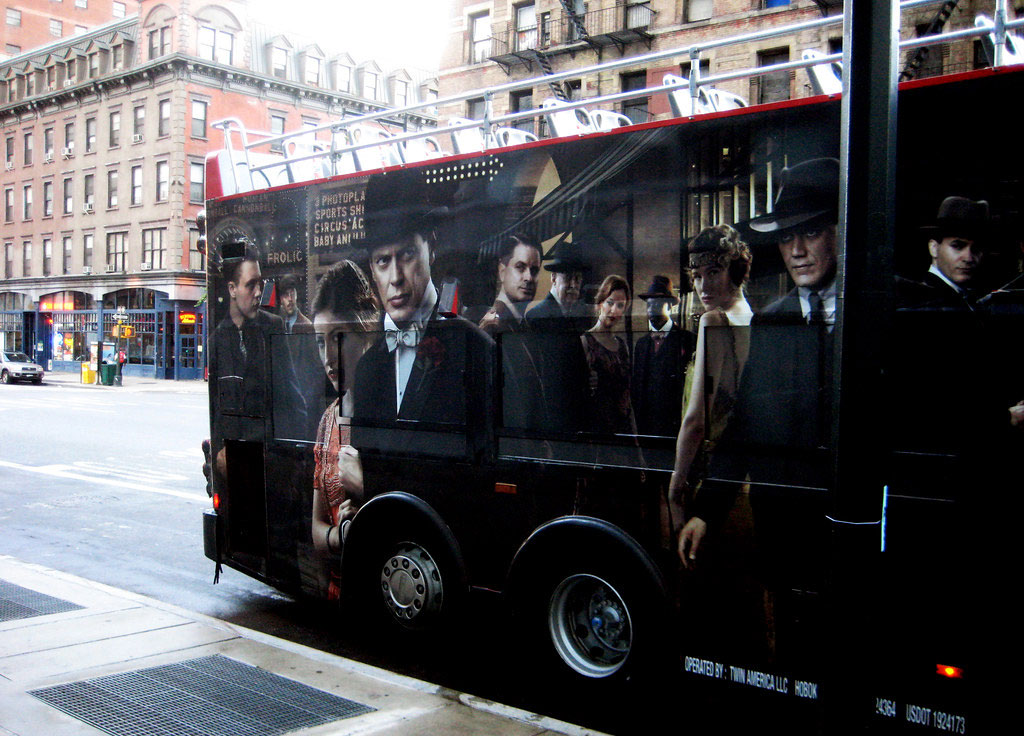 As head tailor and patternmaker for the show, I supervised a team of one fulltime head draper and five fulltime tailors. Most episodes required additional tailors and often I had a busy shop of between 10 and 15 people.

Period television shows usually require background actors to be fit in one or two costumes that they’ll wear in multiple episodes and scenes throughout a season. While many of the garments for principal characters and showgirls were built new, background performers were dressed in actual vintage pieces.

On Boardwalk Empire, the outfits were categorized by “middle class,” “upper class,” “working class,” and sometimes, “evening dress.” What this meant was that there were a lot of really old, fragile garments that needed to last for many months—and a season of filming Boardwalk took about 10 months to complete. 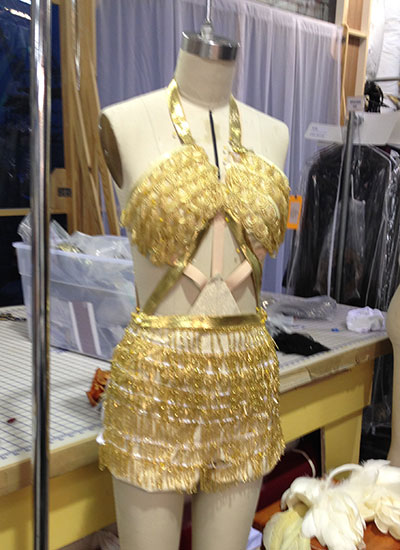 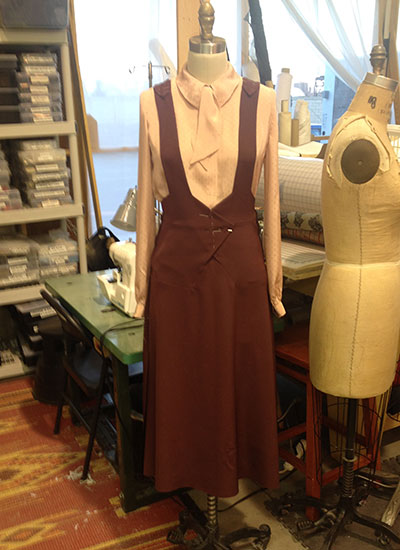 Blouse and jumper for “Margaret”, season 5. 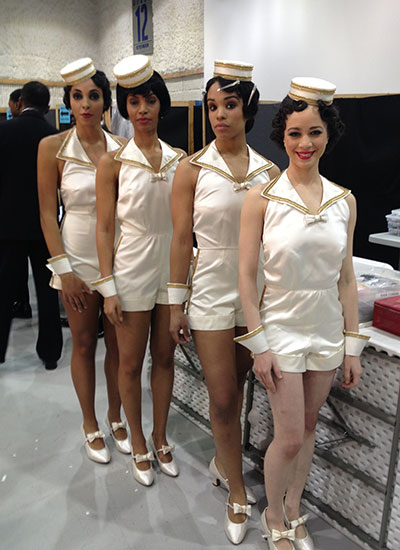 To give you an idea of what we were up against with these garments, one morning, I arrived at work around 6:00 am to find a beaded chiffon dress that had worked in a club scene the night before. The dress was lying on the ironing table with a note that said, “Sorry. Please use your magic. Works today at noon.”

We managed to repair the dress enough to get it back on camera in five hours. So what kind of magic was involved to make these types of repairs happen on a short timeline? Here are six examples of the challenges we faced in the in-house costume shop.

1. Unfortunate Ways to Use Fusible Products

Many vintage clothing lovers and sewers would grimace if they saw some of the things we did to ensure the clothing was screen-worthy.

How do you fix a beaded gown with a silk chiffon base that is coming apart because of dry rot—and the only thing holding it together are the threads the beads are attached with?

We fused lightweight interfacing in large pieces to the inside of many chiffon dresses. None of us are proud of this. The fusible kept the beads in place and provided something to sew through if there happened to be time to repair any of the beading (a rare occurrence).

Another fusible product that we used a lot is something called Mistyfuse. Mistyfuse is essentially Stitch Witchery but more delicate and much lighter. Mistyfuse comes in black or white. It’s an excellent way to fuse two layers of chiffon together. Or, if you’re in a real pinch, forgo the extra chiffon layer and just melt some Misti-fuse on top of whatever you’re trying to hold together by applying a layer of wax paper between the iron and the Mistyfuse! By the end of Boardwalk’s five seasons, many beaded chiffon gowns were held together in this way.

This is not to say that we didn’t occasionally spend time re-beading. We did. But beading is a time-intensive process and often we just didn’t have enough of it.

Antiperspirants with aluminum chloride and sweat are very tough on garments, especially on natural fibers like silk. Many vintage dresses share the common ailment of crunchy, fragile, discolored fabric under the arms.

For these, we would add new chiffon, painstakingly stitched on by hand. The trick was cutting your patch to a size where the edges could be sewn to fabric strong enough to withstand being pierced by a needle.

We had a fulltime ager and fabric dyer who routinely dyed a yard or half a yard of chiffon or China silk to match the color of an existing garment. By the end of the five seasons of the show, we had around 30 large plastic bins filled with different colored silk remnants and scraps. 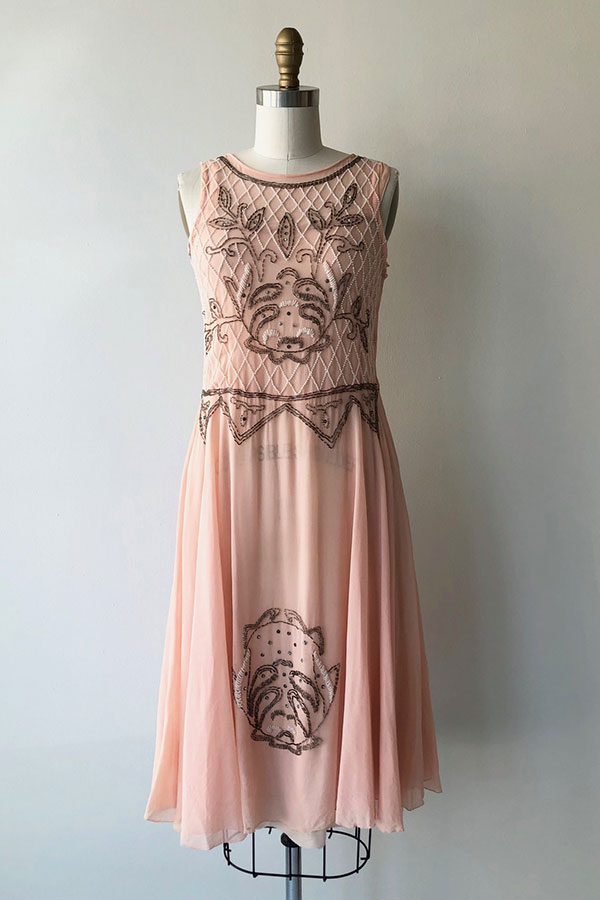 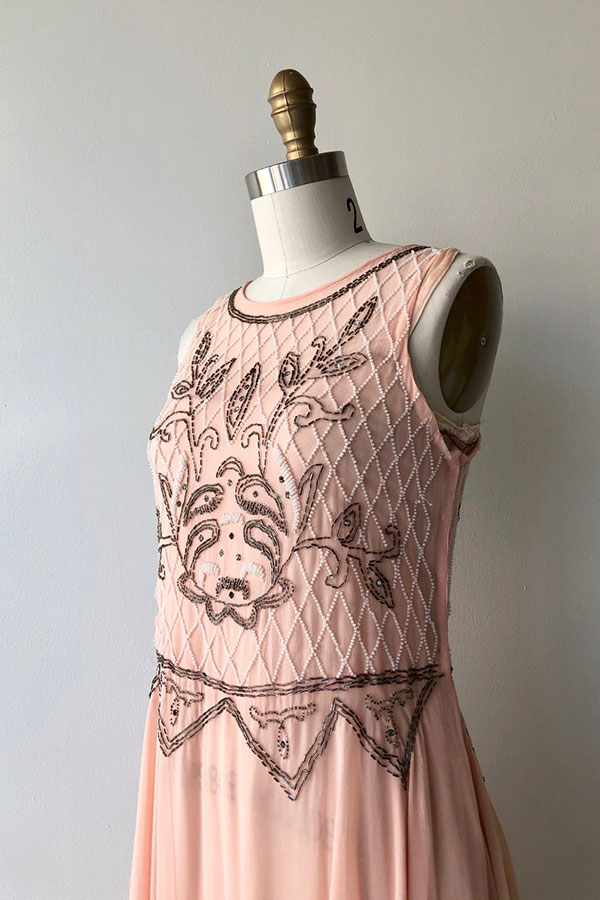 Sometime during Season 2 or 3, the designers purchased a huge lot of vintage fabrics and trims—many of which suffered from dry rot.

I remember very clearly one late-evening incident. I was trying to finish something for the next day’s shooting only to have the ribbon trim shred as I sewed. I finally had to tell the designer she needed to pick another ribbon. We both shed some tears—not everything could be repaired. 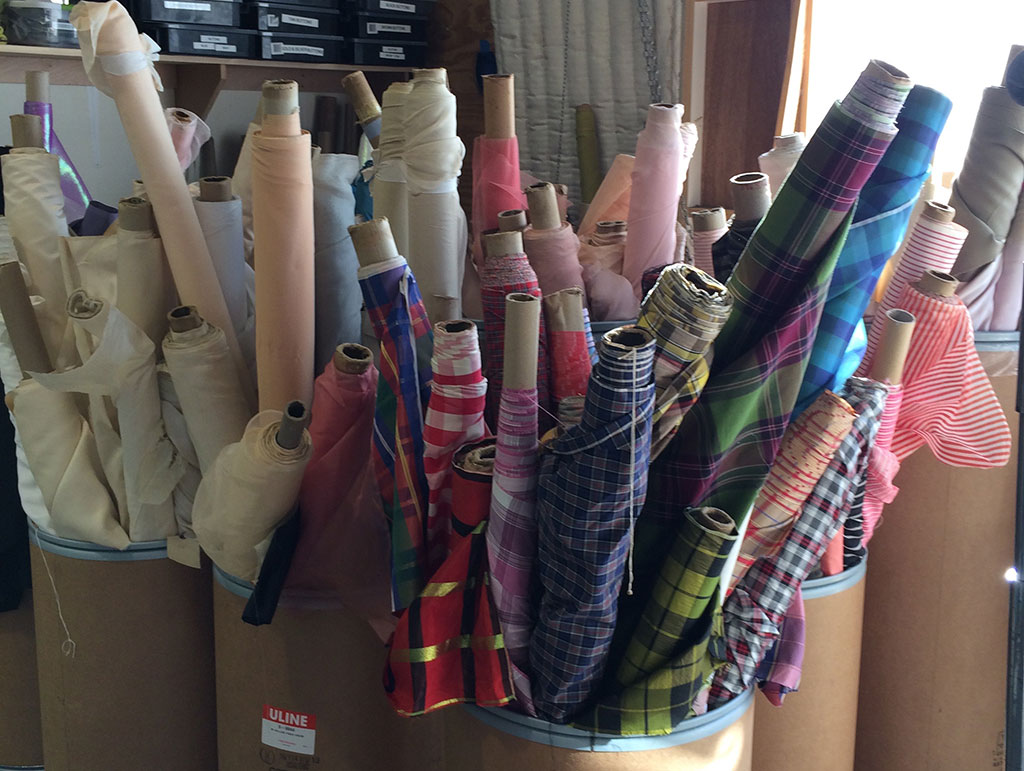 “Just drop a lining in. No big deal. Shouldn’t take you that long.”

We heard this a lot on Boardwalk, often for vintage chiffon dresses that had seen their better days decades ago. 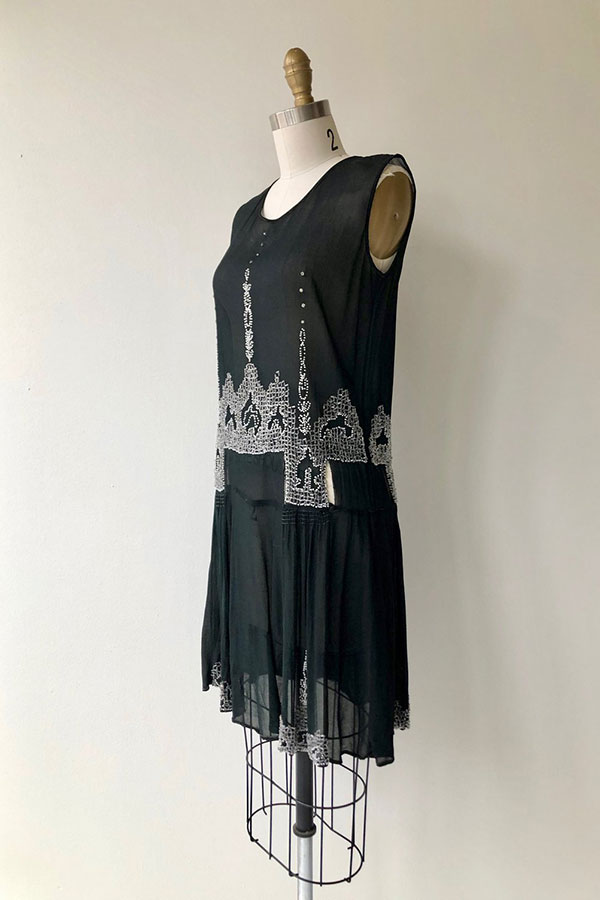 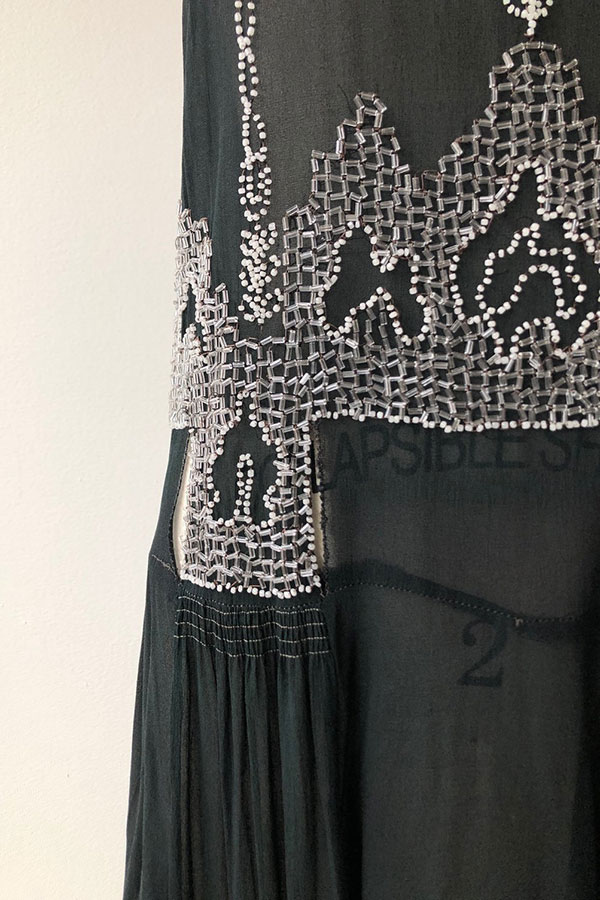 “Dropping a lining in,” is no easy task and certainly not as simple as dropping, well, anything. Unless your garment is a true honest-to-god couple of rectangles sewn together—and believe me it very likely is not—there isn’t anything “just” about it. To line a jacket, or skirt, or dress—or anything—you really need to make a pattern, and it’s going to take more than a couple hours to do that correctly.

We would regularly end up with vintage dresses literally hanging on by a thread with the note, “Drop a lining in!” attached. None of us wanted to do them. We’d shuffle them to the end of the rack until we couldn’t put it off any longer and finally someone would say, “Ok, ok, fine,  I’ll do this one if you’ll do that one.”

“It’s just a couple rectangles.” This is another phrase uttered often in the Boardwalk Empire shop. Again, it’s very unlikely that a garment is just two rectangles. It is likely that perhaps that very original, vintage 1920s flapper dress is two rectangles, but, the probability that two rectangles are what a designer wants today is extremely low.

Clothing fits differently now than it did in 1920. I never drafted a 1920s garment for Boardwalk that was just two rectangles. Ever. I’d always put some shaping in at the waist, curving in slightly, then back out to accommodate the hips. The front and back necklines were also always different—and, more times than I can remember, I added a discreet bust dart in the side seam. Darts are your friends, even in supposed-to-be-1920’s clothing.

These garments are not just a couple rectangles. 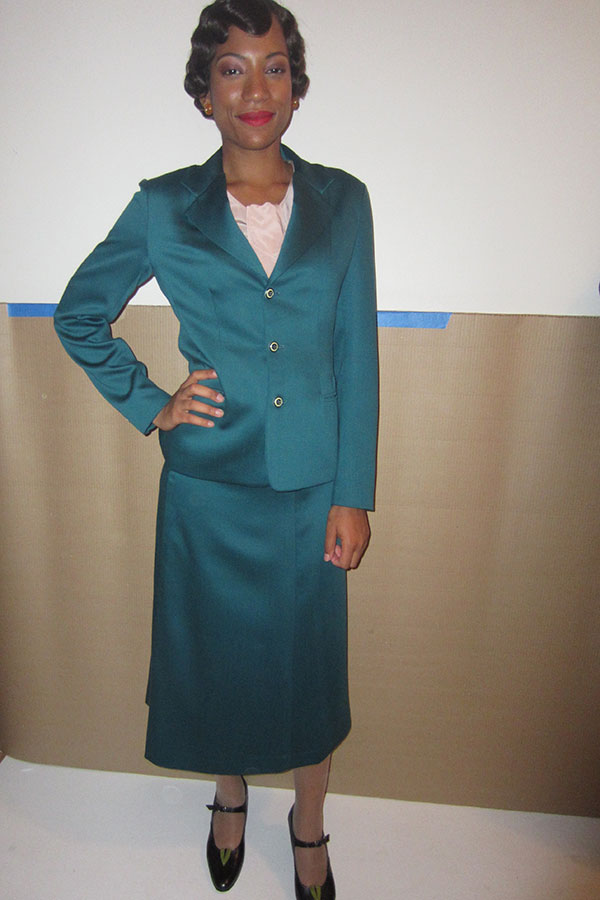 We worked long hours on Boardwalk Empire. The number of garments that passed through the shop number in the thousands. We would occasionally make up little songs about our work.

One was called, “Don’t waste your life looking for a button.” Garments showed up often missing one button that we’d have to replace. While we had a huge button stock, the chances of finding an exact match were always slim. If you weren’t careful, you could become obsessed and suddenly an hour or two would go by as you dug through tray after tray of buttons.

So What Did I learn?

We sang another song in the costume shop, one that taught me one of my favorite lessons for sewing. It was called, “There’s only one right way to do things, the other ways are wrong,”—a sarcastic ditty we started singing in reference to those people who think their way of doing something is the only way to do it. This is simply not true!

There is absolutely more than one “right” way to do something, even when it comes to sewing. You have to find what works best for you. I love learning new techniques from other sewers, but they aren’t always techniques that work for me.

Sewing is an art form. The right way to do something is the way that works best for you in a given situation. Sewing provides room for interpretation and ingenuity—especially if you’re trying to save a hundred-year-old silk chiffon beaded dress in five hours. 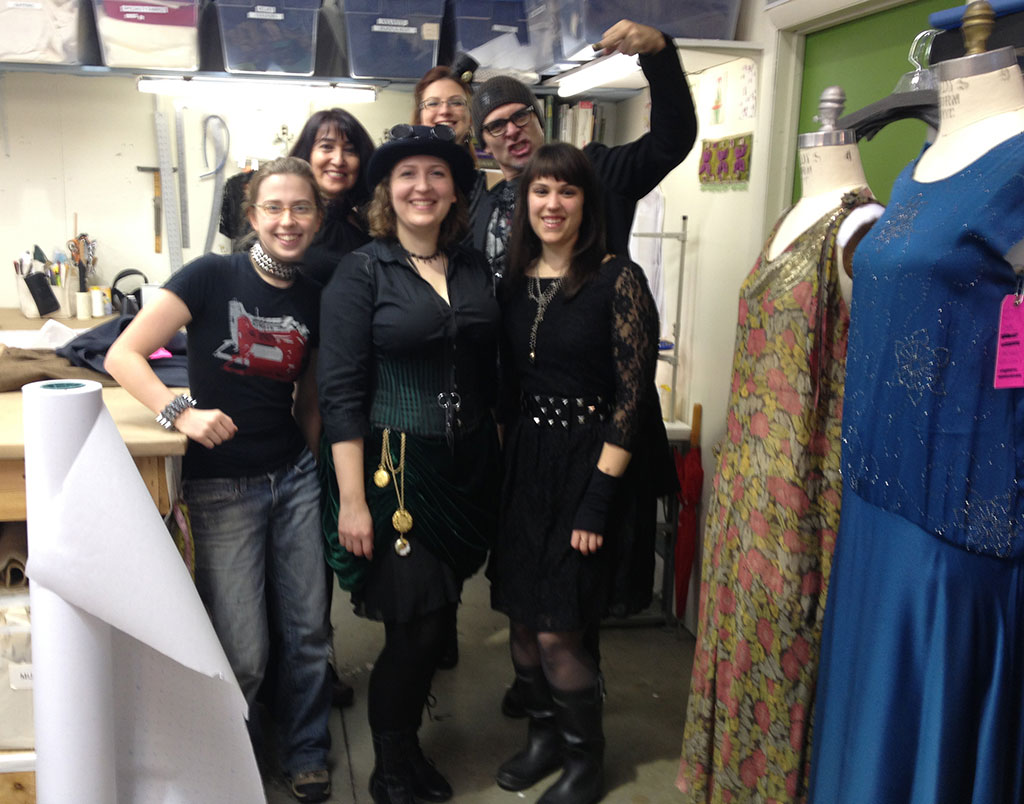 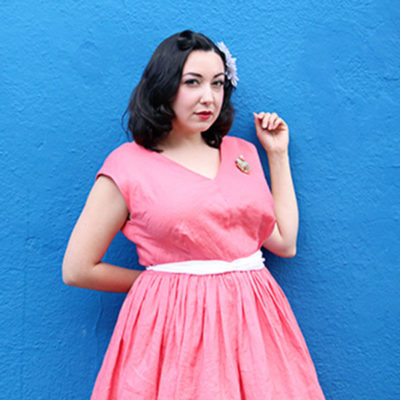 How Vintage on Tap uses video to inspire you to sew. 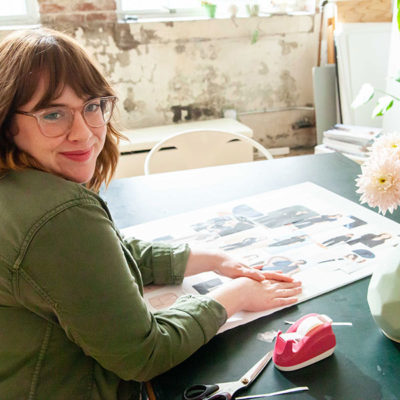 Take a behind-the-scenes look at our pattern design process, by Haley Glenn. 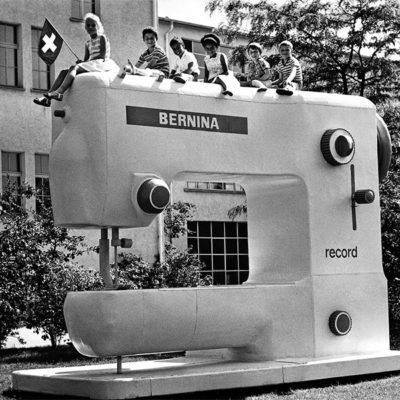 On the Road with Bernina

How this iconic brand maintains its worldwide appeal, by Meg Stively. 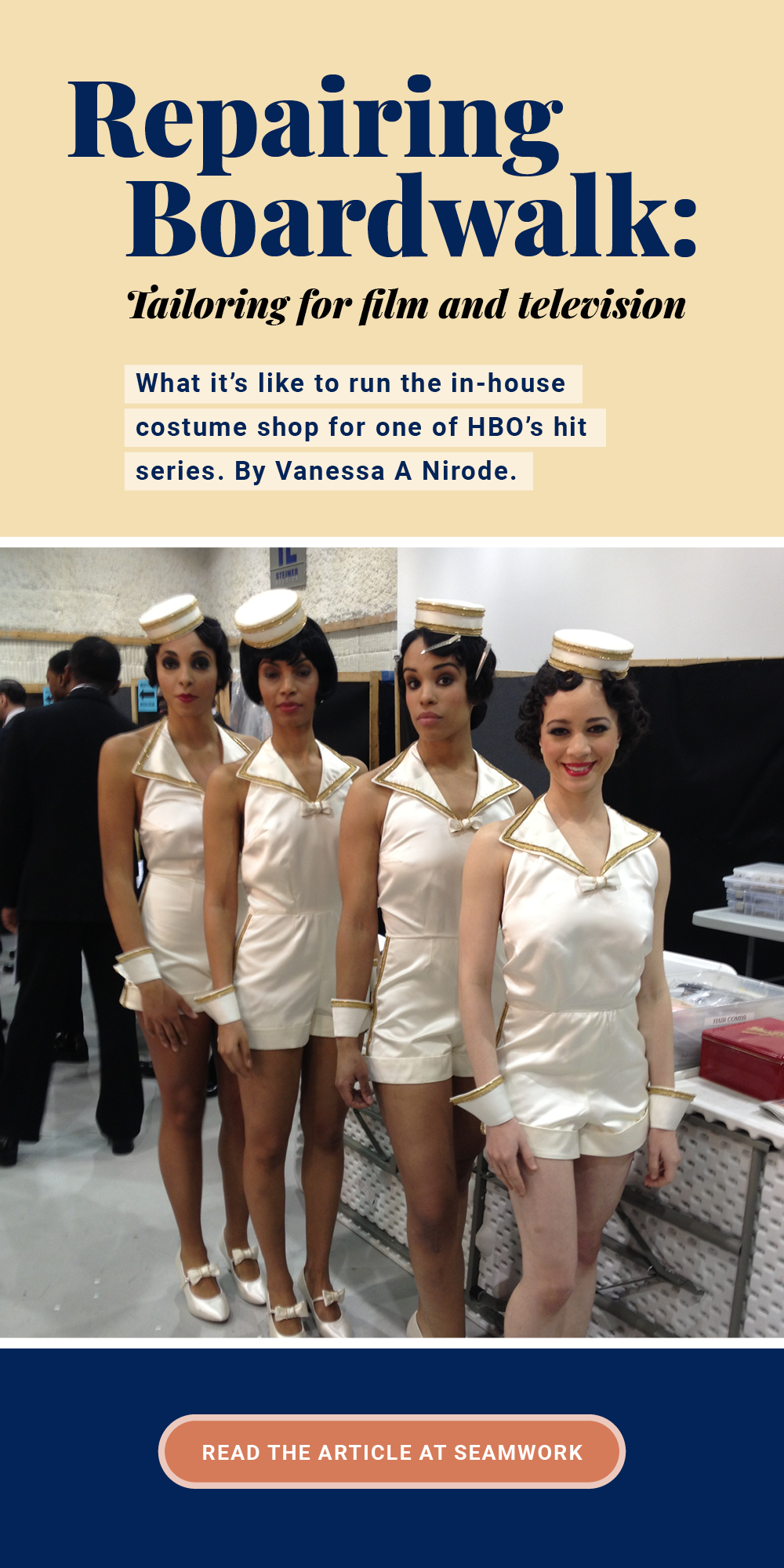