Anatomy of a Bra

Each part plays a role in this essential undergarment. Understanding those roles is the first step in making your own. By Norma Loehr.

As a custom bra maker, bra pattern maker, and bra sewing teacher, I am constantly surprised by how mysterious bras are to the home sewist. Even though we use them every day, they are perhaps the least understood of all the garments in our wardrobes. Yes, all the fussy bits can get intimidating — underwires, various grades of elastic, hardware — but a home sewn bra is one of the most satisfying things to make since you can wear it every day and it feels luxurious and lovely. The first step to making great bras is understanding the structure and function of the parts of the bra. 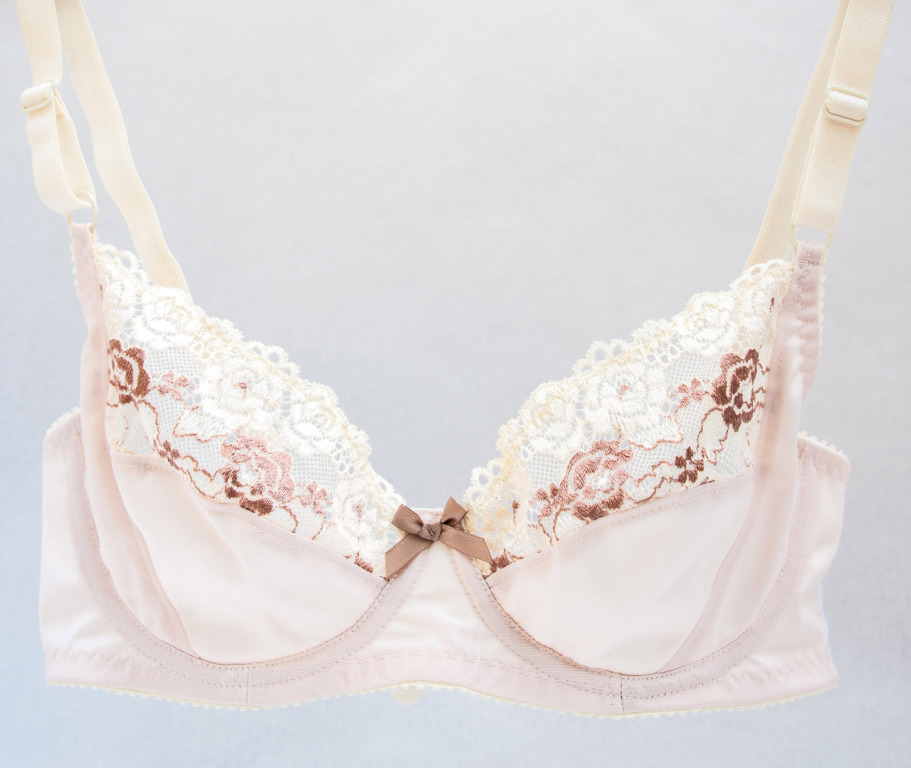 Bra cups are designed to enclose and hold the breast tissue and also to help shape the breasts. Cups can be rigid or soft. The Gaultier cone bra Madonna wore for her Blonde Ambition tour or the foam bras from Victoria’s Secret are relatively extreme examples of cups that shape the body to the garment using rigid materials.

Cut-and-sew bras, like my Marlborough bra pattern or any other bra you will likely sew, provide subtler shaping by virtue of the curvature and placement of the seam lines and the directionality of the stretch of the fabric. You can still achieve significant shaping and/or padding with cut-and-sew bras, but the overall effect is much more pleasing. This is where the bra maker’s hand and eye can really make a difference.

To talk about how fabric shapes the cups, it helps to understand how fabric is cut for bras. The key determinant of how the bra pieces are cut is the direction of the greatest stretch or movement of the fabric, not the grainline. The term “stretch” refers to fabric that incorporates Spandex fibers and the term “movement” refers to the mechanical give a fabric has based on the weave or knit of the fabric’s fibers. I like to collectively call these terms “movement” since both qualities can be suitable for bra making.

The key determinant of how the bra pieces are cut is the direction of the greatest stretch or movement of the fabric, not the grainline.

The direction of movement directs the breast tissue along with it. So if the direction of stretch is placed vertically, the tissue will move vertically in the cup and if it is placed horizontally, the tissue will move horizontally in the cup. Therefore, a vertical movement orientation is used for the lower cup pieces of the bra, to provide lift in the cup, and a horizontal movement orientation is used for the upper cup to bring tissue away from the sides and toward the center of the body. The horizontal orientation is also used for any “power bar," a support panel on the outer side of the bra cup that spans the upper and lower cup. The power bar is a particularly effective way to achieve a horizontal movement of the tissue toward the front of the body.

The arrows indicate the degree of greatest stretch or movement, not the grainline.

Thinking about seams in the cups, the more seams there are, the greater the ability to create shaping and strengthen the cup. This is why you frequently see multiple piece cups in supportive bras for larger sizes. Cup seams are also almost always topstitched to further strengthen them and to eliminate any potential chafing.

Notice how support has not been mentioned yet? That is because the primary job of the cups is to harness all the breast tissue and hold it securely to the rest of the bra. Support in a bra comes primarily from the frame and the band of the bra by way of the underwires.

To start the support story, let’s begin with a description of the frame and the band. The frame is the front of the bra where the cups are sewn into the bra. The frame can be split into two pieces with the center front piece called the bridge. Any movement in the frame or bridge fabric is placed in the vertical direction so the cup placement does not move and the bridge area is also typically stabilized for the same reason. It should be noted that some bras do not have a frame and only have the bridge to separate the cups on the front of the body. This makes a stable bridge even more important. 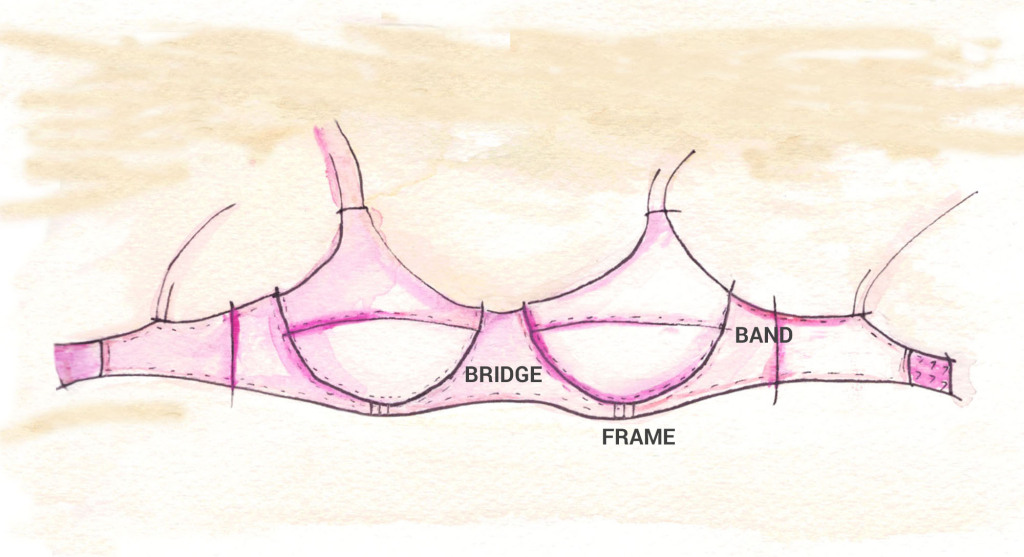 This style provides distributed support through the frame. 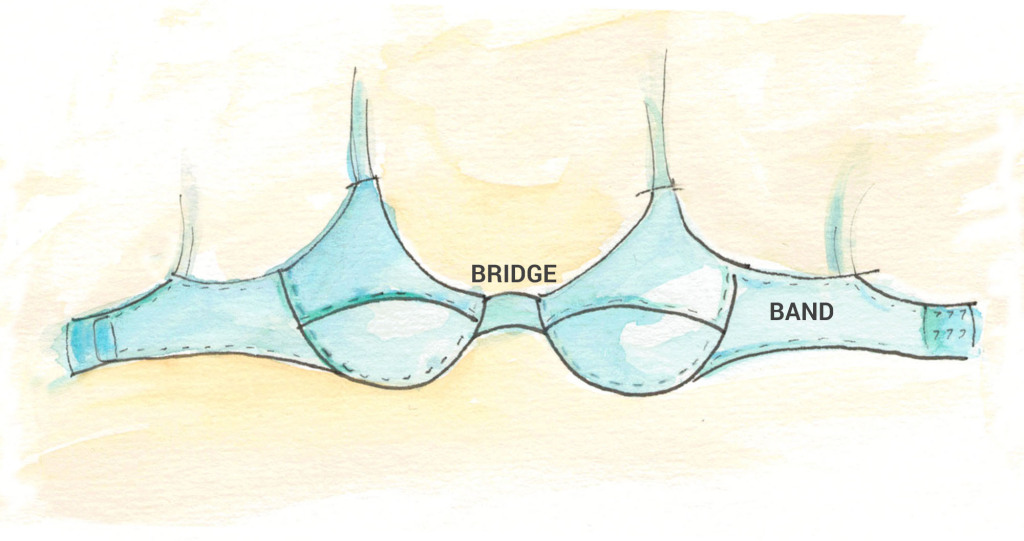 This style has no frame connecting the band and bridge.

Now let’s talk underwires. Bra underwires, typically made of metal, are most often located inside of a plush casing that surrounds the cup. Underwires are designed to have some spring in them so that they splay a bit when the bra is worn.

Underwires are the key to support in a bra. To understand how they work, it helps to think of the Golden Gate Bridge. It has two tall towers, each with suspension cables coming down from it that join the deck of the bridge. Those cables look a bit like an underwire, right? Well, they work in a similar way. The downward force from traffic on the deck of the bridge travels up the cables. The cables then transfer that force to the towers and then the towers diffuse the force by transferring it into the earth.

Both bras and bridges need strong foundations to support the weight they must bear. To provide this foundation, the frame and band must be fitted snugly on the body. If the bra band is too large or too stretchy, the support level is decreased.

Bridges also illustrate why non underwired bras do not provide as much support. Think of a rope bridge: it is anchored on each side, but it sinks down when something heavy is on it. This is because there is no rigid support infrastructure to transfer the downward pressure of the object on the bridge away from the deck. While non-wired bras can be fun to wear for short periods of time, their lack of support makes them generally unsuitable for any kind of application as undergarments. For most women, they are more suited to loungewear or sleepwear.

You may be surprised that bra straps are not part of the support story, but the primary role of the straps is to keep the bra in the correct vertical position on the body. That is not to say they don’t take on some of the supporting stress, but it is just not their primary job. This is a very good thing since no one wants to feel that kind of pressure weighing on their shoulders.

Bra straps are frequently made completely of elastic but they can also be made of multiple parts with a non-stretch fabric for the front of the bra and an elastic part for the back. They are also sometimes padded for comfort. In terms of strap comfort it is definitely preferable to have at least part of the straps made from elastic. Adjustable straps are also preferable so that as the bra wears out over time the straps can be tightened to maintain the correct garment positioning on the body.

With that we come to the bra hardware, the hooks and eyes and the rings and slides. The hooks and eyes securely hold the bra together while the bra is under tension, typically at the center back of the garment. They usually have multiple positions so the bra can be loosened or tightened for the individual figure and can be adjusted over time as the bra elastics wear out. The rings and slides, typically made of metal (though they can also be in plastic) allow the bra straps to be adjusted as described above.

Ultimately, the best way to really learn bra anatomy is to try sewing one for yourself. It is not difficult and it is one of the most satisfying garments you will ever sew. Find yourself a good instructional book, a good pattern, and the right materials (I have suggestions for all three at my site), and have fun! 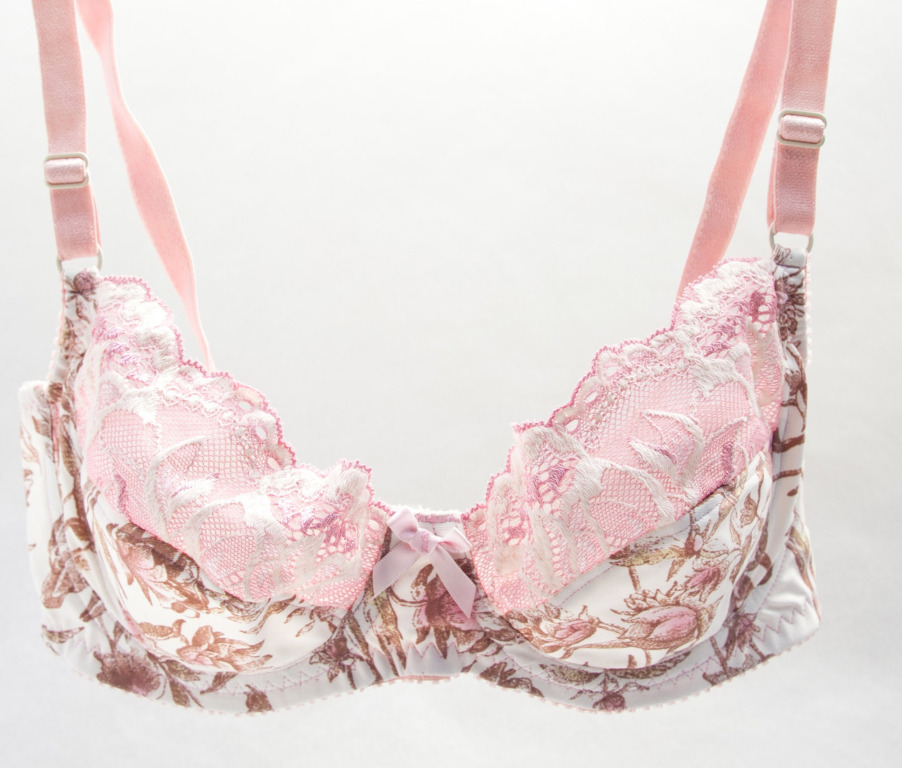 
Norma Loehr is a lingerie sewing pattern designer and author of the book Demystifying Bra Fitting and Construction. Working from her Boston area studio, she is on a mission to teach women to sew their own lingerie. You can connect with her on Twitter and read more about the art of bra making on her blog.