Founder, Monica Tetteh shares how a movement was born online among the Black Sewing Community. By Lori Caldwell.

In the wake of the global protests around the murder of George Floyd by police in Minneapolis, MN on May 25th, Black Lives Matter has become a powerful movement, not only shining a light on systemic problems of policing in Black communities, but also of the role that systemic racism plays in every facet of life, including in the sewing community. 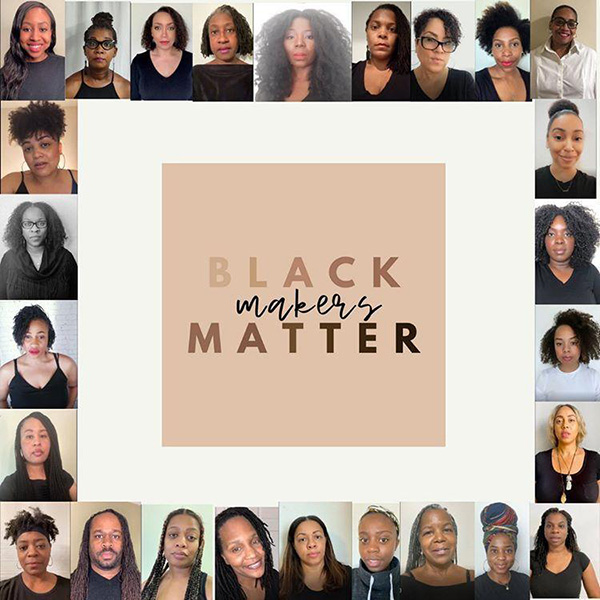 For Monica Tetteh, Black sewing blogger and social media influencer, the time had come to do something about it.

Monica: As I was sitting, just watching everything happen on the news, the more and more I just became numb and tired. I have always been someone to bring together the sewing community. That’s been my thing from Project Sew as well as the Sew Your View that I host.

Monica was upset that while many companies had made public statements condemning George Floyd’s murder and in support of Black Lives Matter, the sewing industry had remained largely silent.

Monica: I was at work. And, I was working on a mask project and I was preparing a post [on Instagram] because I had not heard anything from the Big 4 companies [Simplicity, McCall's, Vogue, and Butterick], or Joann’s or Hobby Lobby, and I was getting ready to press it but I needed to make sure I had my words and everything formulated. So during my break, I totally forgot and didn’t post. A little later, I noticed that Brittany Jones had posted a passionate video—just the fact that she was saddened by the lack of response from people she works with, collaborates with. So, I went ahead and posted, and then, it was a couple more people that ended up posting. And then, of course, Mimi G posted as well within that day or the next day.

As more and more Black sewists posted their hurt and discontent on social media, Monica decided they needed to do more than just air their grievances. They needed to take action.

Monica: I slid into a couple of people’s DMs...I sent it out to people that I have relationships with, that I’ve met in person, that I’ve communicated with a little bit more through social media and Instagram, or just that they’re passionate about amplifying Black voices. 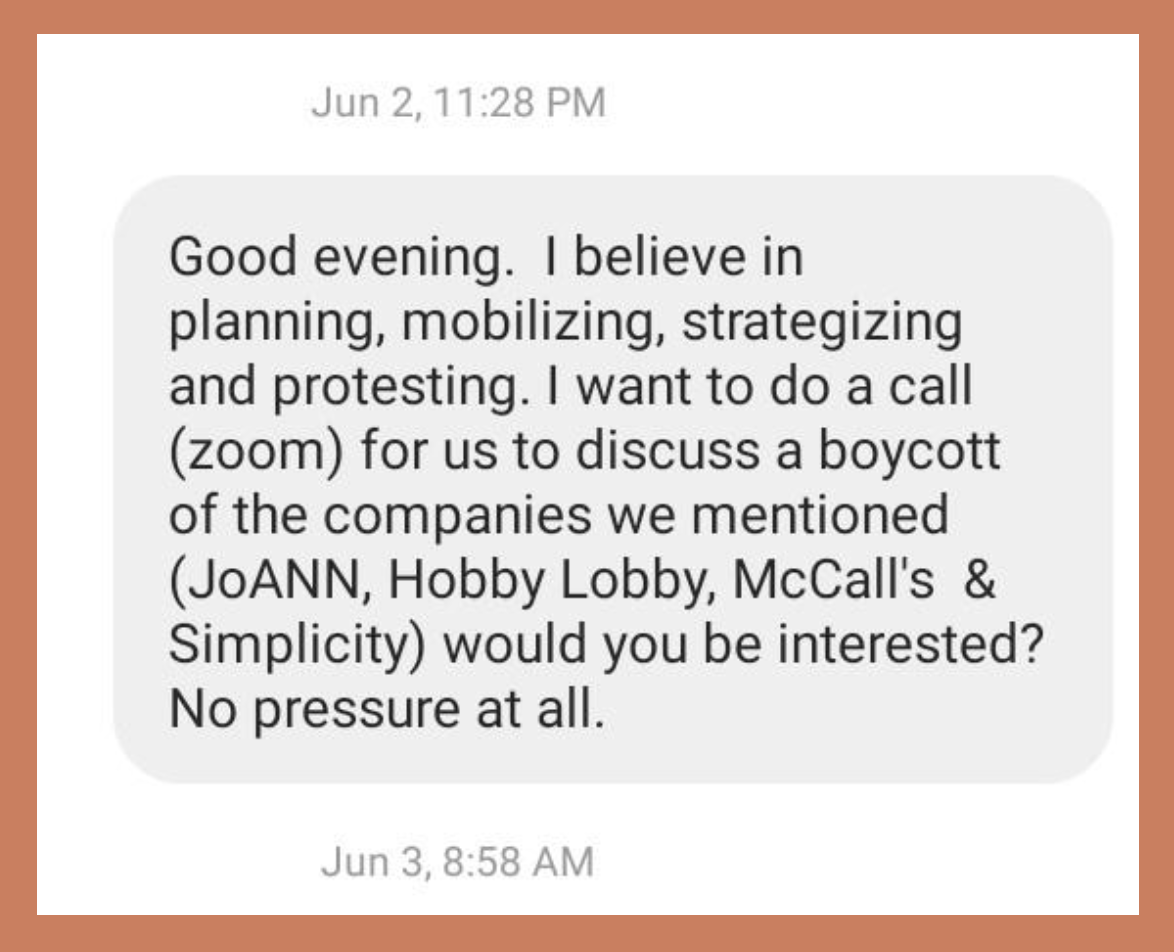 Monica didn’t know if anyone would be open to her idea, but the response was overwhelming.

Monica: I didn’t realize that what I was doing was going to spur this movement, honestly...That’s really how it started. I set up the Zoom call and we all got together...We allowed everyone to talk freely and talk about their experiences, talk about why this is important to them...It was a three-hour meeting. It was a long meeting, but we all talked about our experiences being Black women—at the time we had not added Julian (Julian Collins of Julian Creates, Black male sewing blogger and social media influencer).


With that call, Black Makers Matter began. They launched their Instagram page and created posts defining their Mission, Vision, and Community Standards: 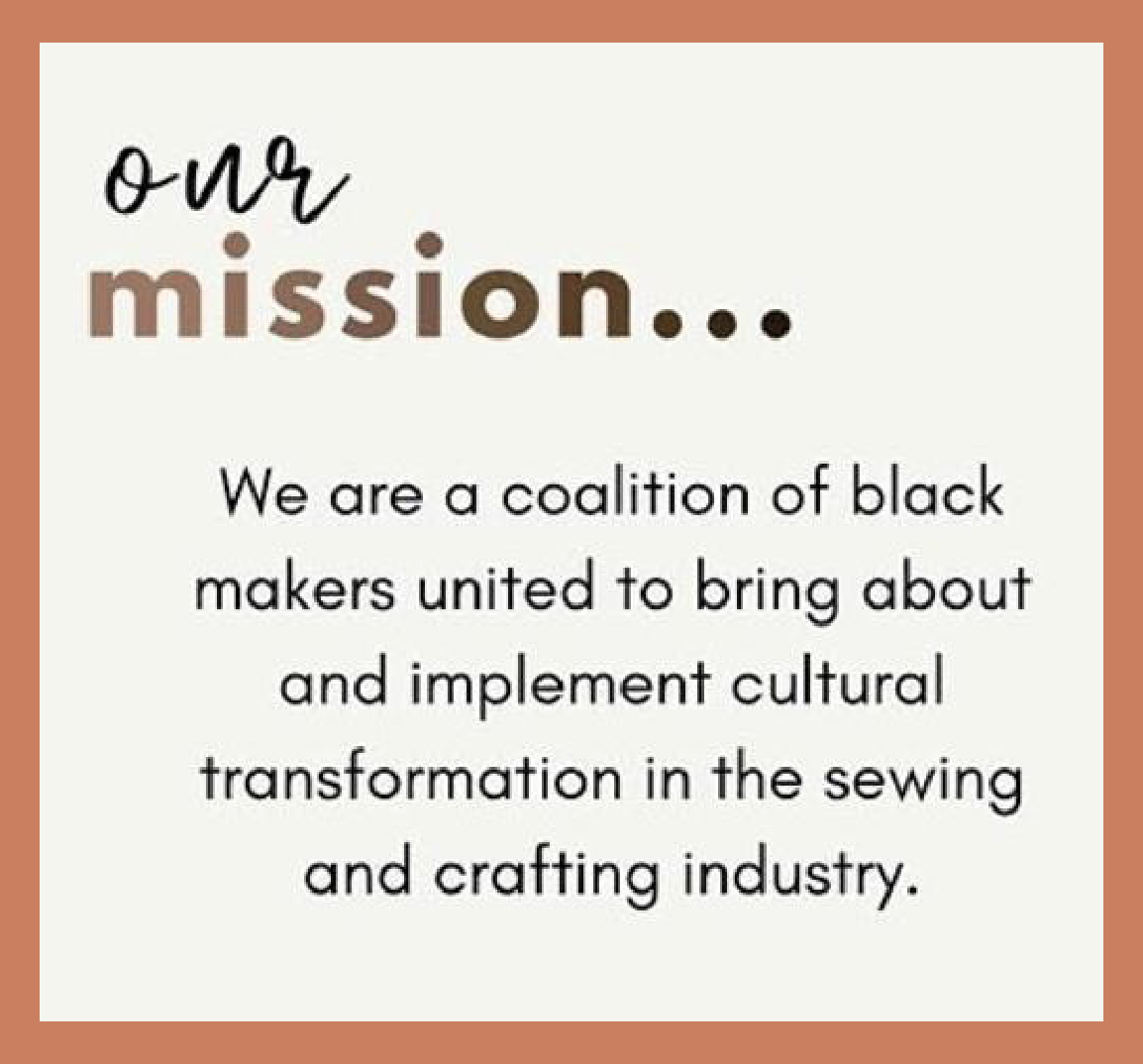 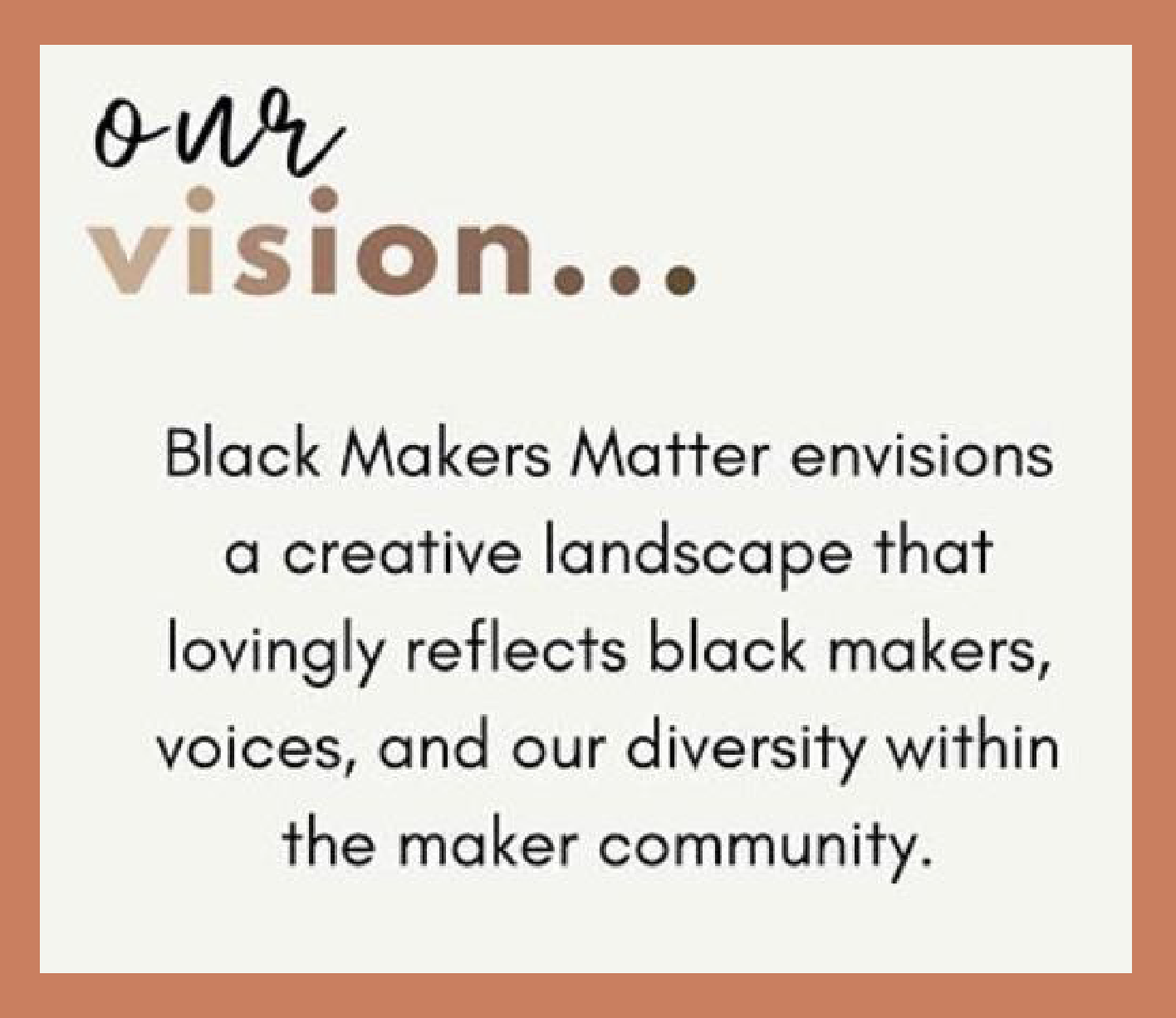 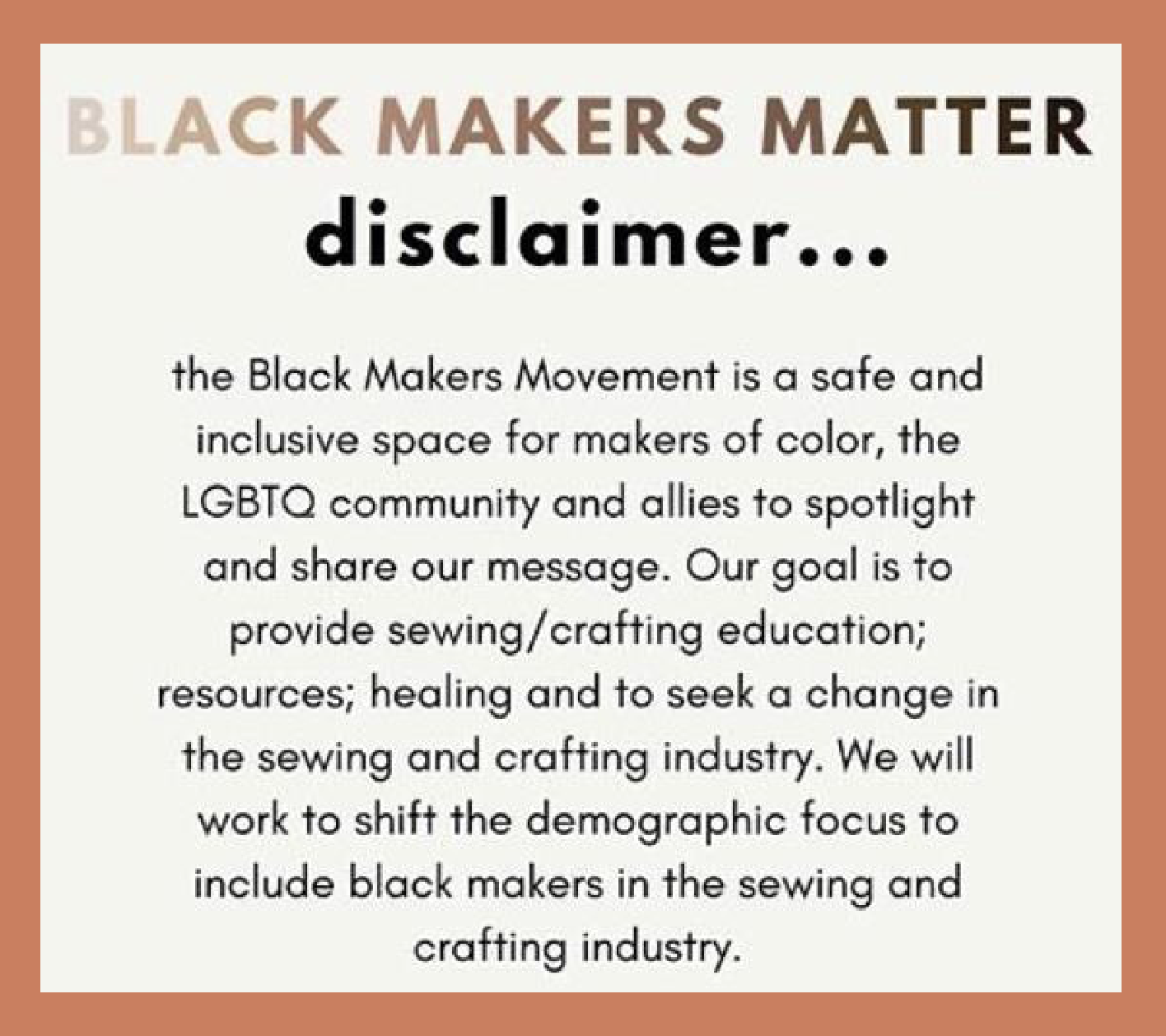 Monica: We did not, I mean literally, we did not expect that. It was just such an immediate reaction from everyone. And, it was kind of like, Oh my goodness, wow, wow! This is needed. 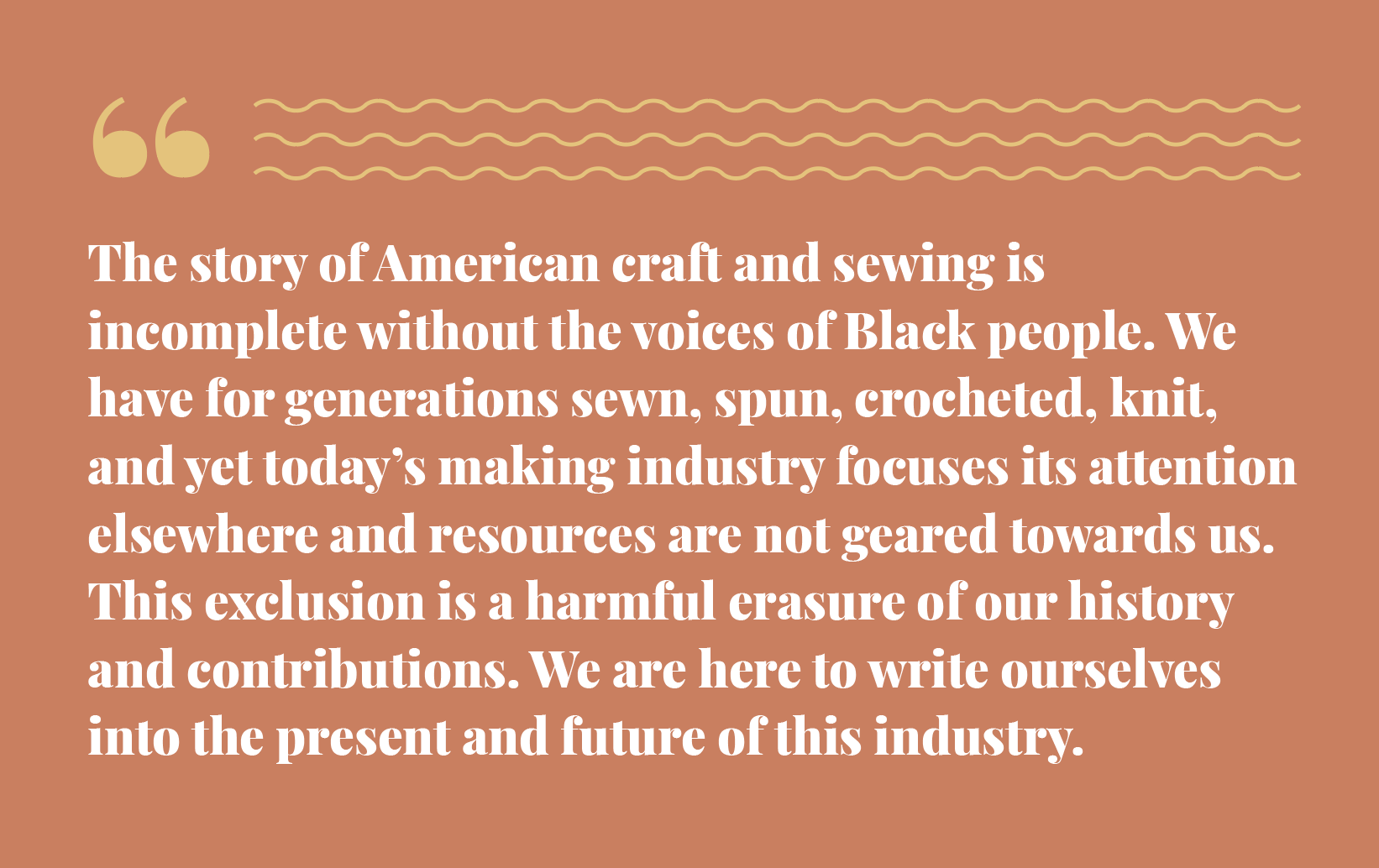 According to Monica, this need stems from a lack of representation of Black people and culture in the sewing industry.

Monica: Living in the United States, when you look at the sewing community, it is geared towards White, older women. They don’t market to us as Black women. Sewing and crafting has been an ancestral practice for Black people for centuries. Whether it was the weaving of sacred cloth in West African homelands or stitching healing from the scraps of indifference, the story of American craft and sewing is incomplete without the voices of Black people. We have for generations sewn, spun, crocheted, knit, and yet today’s making industry focuses its attention elsewhere and resources are not geared towards us. This exclusion is a harmful erasure of our history and contributions. We are here to write ourselves into the present and future of this industry.

Though the collective launched less than a month ago, Black Makers Matter has already made amazing strides in creating a more inclusive and truly diverse sewing community.

Monica: From recent conversations with allies and other organizations that have contacted us, we’re starting to see—and I think everyone is shifting. There’s a shift. I can feel it. And, there’s no more going to be that tokenism—You know, ‘we just have this one Black person that we’re going to choose or person of color and that’s it. We’ve done our part.’

We’ve met with SVP group, Singer, Husqvarna Viking & Pfaff, and they came to our meeting so prepared. In a way that we left with a ‘Wow.’ It was different from one of our first meetings...They said, ‘How can we partner with you?’ ‘Can we also ask you guys to serve on an advisory board for us?’ So, I said yes, definitely...We’ll look at some of your marketing practices or social media, or things that may be questionable.

Though Black Makers Matter is excited to be working within the sewing industry, it also has its own plans to make a mark on the larger community on its own. 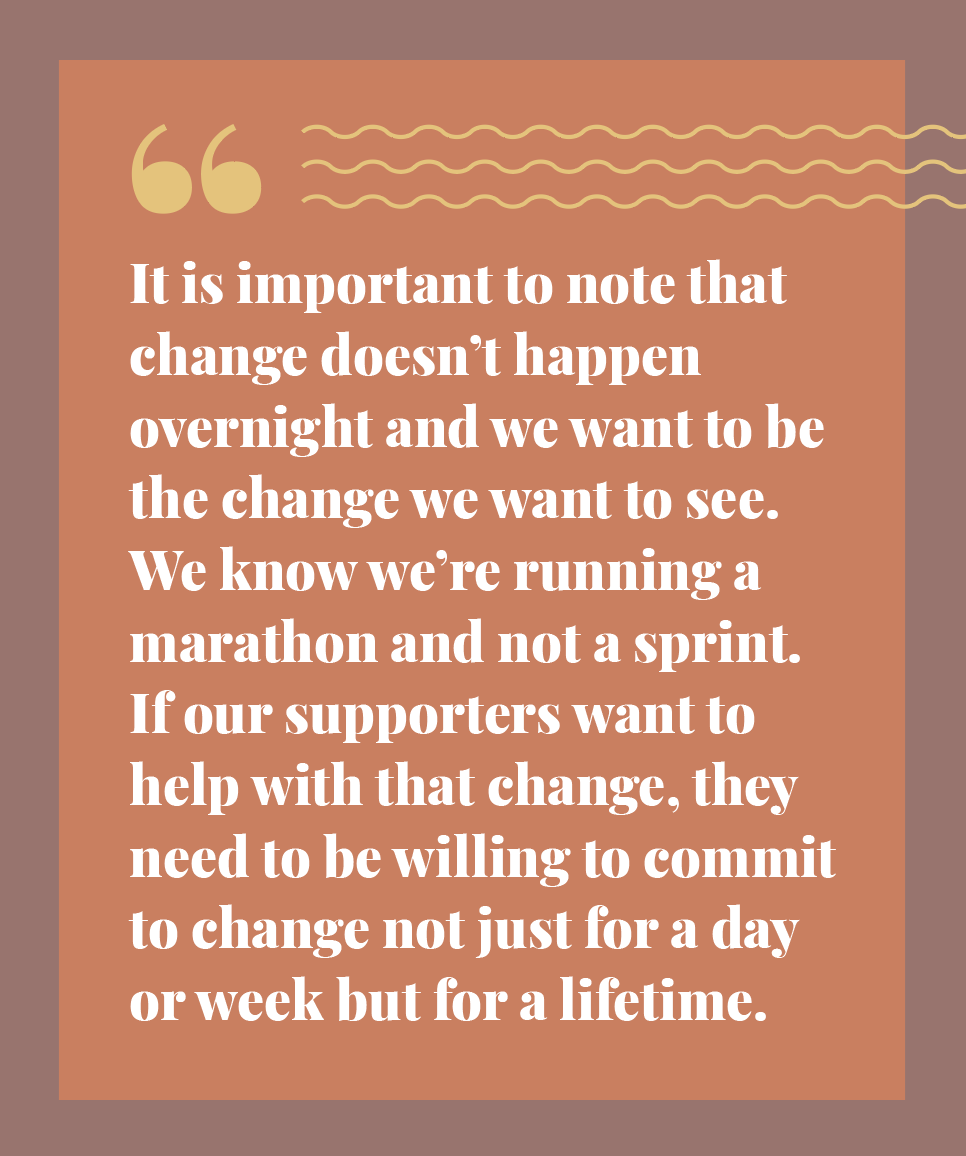 So, how can people support Black Makers Matter?

Monica: At this time we ask that supporters share our page, interact with us, fill out our surveys about various makers and contribute to areas that they can help change. It is important to note that change doesn’t happen overnight and we want to be the change we want to see. We know we’re running a marathon and not a sprint. If our supporters want to help with that change they need to be willing to commit to change not just for a day or week but for a lifetime.


Lori Caldwell is the former owner/founder of leather goods company, Minnie + George, based in Portland, OR, and an avid maker, sewer, and Seamwork subscriber. 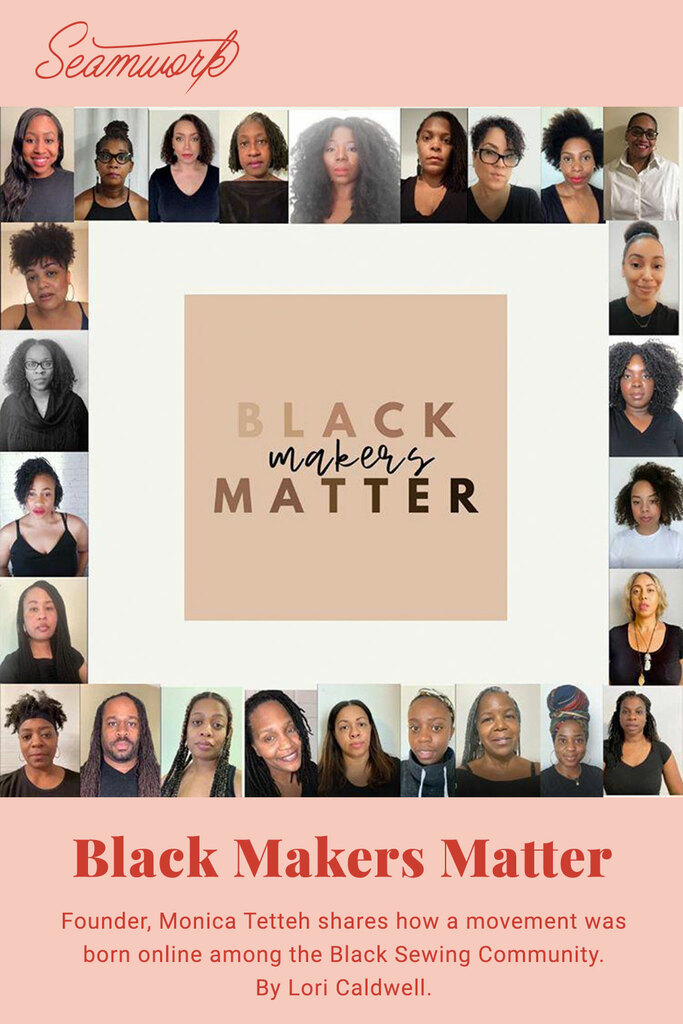