A spoiler-free taste of some of the strengths and disappointments of this popular, sewing-adjacent gem of a book. By Chelsea Wall.

At the risk of sounding melodramatic, I first picked up a needle and thread out of some deep painful longing—to feel a more visceral connection to the faceless heaving current of historical human life. I cannot be alone in that; indeed, I suspect Kassia St. Clair, author of The Golden Thread, shares a similar drive.

Her delightful book weaves together 13 stories from discrete moments in human existence as she seeks to illustrate the vastness and depth of textiles’ significance as markers and drivers of history.

Indeed, St. Clair’s best work crystallizes around the moments where she gestures towards the curious way that textiles find their highest expressions in the liminal space where the sacred and the mundane co-mingle— in the subtle tenacity of textiles to become lasting social metaphors.

For St. Clair, fabric functions as a compelling meld of the anthropological and the human evolutionary drive; however, in many ways, our methods of naming and inquiry combined with the cruelty of decay obscure the daily ephemera of ancient life and leave only the remains of Iron, Bronze, and Stone. This seems especially tragic considering that oral history across the globe marks a deliciously human fabric tradition capable of more dexterous feats than modern machinery (30). 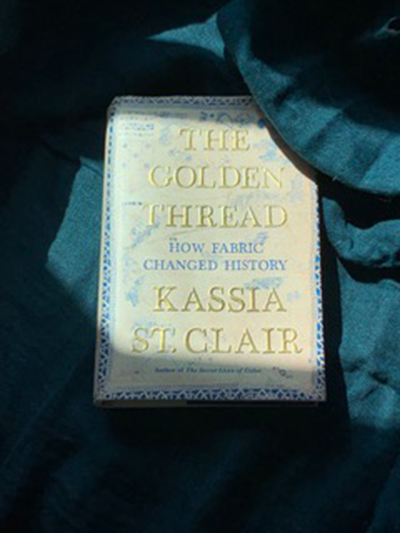 “It is no accident that the entire fabric of mythology and fairy tales is shot through with references to textiles and weaving. The work of making cloth was particularly conducive to storytelling…” Kassia St. Clair

The Western historical gaze, too, proves deeply problematic here, as always. To illustrate: amongst the funnier anecdotes of the faux pas that British Egyptologists committed against their findings (adipocere candles! How ghoulish!) lurks the unmistakable sense that the frameworks of material interrogation they employed simply could not conceptualize the relationship between Egyptian life and ritual textiles. Their hurried methods and skewed lens, in fact, obscured these items’ significance, and these sacred artifacts were frequently (mis)handled with a sloppiness that can only be described as profoundly sad. 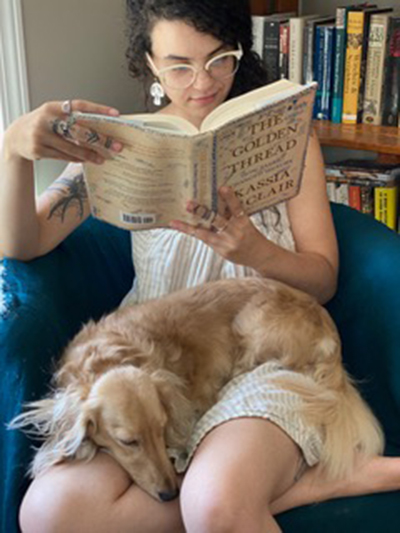 St. Clair does an excellent job priming her readers to ask critical questions of the lens through which they receive their textile history. However, when conjuring the long global history of disregarding the human cost of getting our clothing, I expected more. The chapter “Solomon’s Coats” adds important critique about the role of cotton as currency in the Americas, but the slapdash and hurried approach with which she sets up the chapter hardly seems apropos.


This leaves only a mere third of the chapter to cram both the devastating burden of rayon production on the environment and the disproportionate toxicity load carried by the Black and Brown textile workers currently exploited by the industry. These workers seem like an afterthought as they only claim such a small fraction of the text. Indeed, even this oversight becomes productive in exemplifying why we must keep working until our concept of justice can include not only the condemnation of toxic institutions, systems, and tools of exploitation but also the rhetorics and critical frameworks that render this exploitation invisible.

Despite problems with the framing of a few chapters, St. Clair certainly excels at articulating complex technical processes in a way that is friendly to her audience. In this way, she claims a clever positioning from which to write against how capitalism and fast fashion marketing work to obscure the means of production from everyday consumers.

Cultivating silkworms, for example, is hard and risky work! And silk can function as a marker through which historical cultural exchange can be traced. St. Clair works to trouble our Western understanding of the ancient Silk Road, destabilizing it by presenting a collection of silk roads that were as fluid as the fabrics from which they take their name.

“The language of textiles is like the ticking of a clock in the room: inescapable once noticed.” Kassia St. Clair

Her narrative strategy does, however, reach its limits. The chapters about wool, in particular, become tangential and scattered—the amount of information being juggled creates a disjointed reading experience, albeit nonetheless an ambitious and interesting one. The art references also become quite heavy to move through without access to visuals of the portraits that she details.

Despite this, The Golden Thread was a compelling and eye-opening read. The anecdotes presented about the development of synthetics created to traverse Mount Everest worked to rehabilitate my leeriness towards them; the birth of high-performance synthetics, in St. Clair’s vision, seems a necessary evil in countering life-threatening concerns about Earth’s environment.

The book, too, left me laughing with incredulity as she reframes the intersections of sewing and technology in a way that is both stunning and provocative; my favorite chapter was the one about the bra sewists who moonlit for NASA and the madcap series of experiments that led them there. Her oddly breathless and compelling storytelling, as she describes the fight to secure the federal contract to create what would become the A7-L Omega suit, revives the human element in a world where it is so often obscured in favor of the cold security of machinery.

Easy to pick up and put down in short bursts, the Golden Thread is, as St. Clair warns in her introduction, a book for the curious. I was left with valuable lessons to bring to my sewing practice, both uplifted by and distressed about my role in the global history of textiles. What a blessing it is that with great knowledge, comes great opportunity to improve. 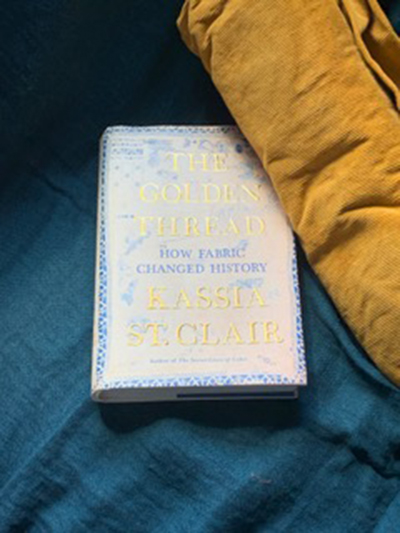 
Chelsea is an herbalist, sewist, birthworker, toddler mom, and dachshund enthusiast who is so excited to bring to her academic background as a former English professor to this unexpected corner of the world. You can find her sharing on Instagram sharing herbal and textiles makes, close reading Tweets, leaking the occasional dog photo at @virginia.wool.f.