From the Plains to Paris and back again, by Betsy Blodgett. 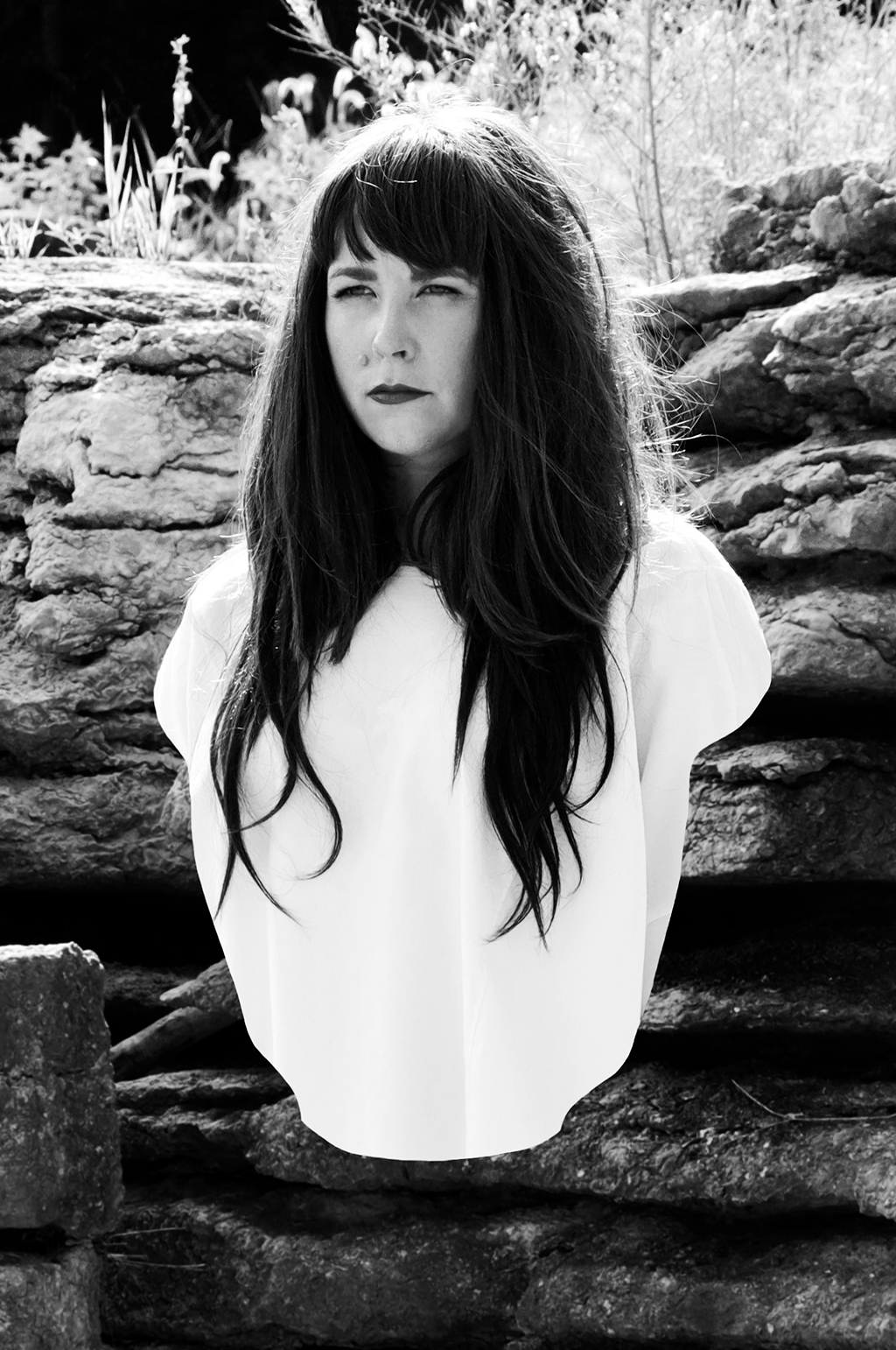 In the center of her eponymous retail space in the Crossroads Arts District in Kansas City, Missouri, stands a tall table in a small whitewashed room. This table, currently filled with fabric, papers, and all the other debris that accumulates in a design business, acts as both desk, sewing space, and base of operations for designer Hadley Johnson.

It was in this same space that I originally met Hadley more than ten years ago. At the time, it was a boutique called Spool, and Hadley, then a recent fine arts major, had created it as an outlet for her screen printed fashions and to feature other local artists’ work. In the four years that Hadley owned Spool, she educated herself in the world of retail and wholesale business, while also teaching herself how to construct garments. Then, in June 2007, she sold the business, packed her bags, and moved to Paris.

"I had this moment of I can do whatever I want, like, anything I want,” Hadley said. “For some reason my heart just told me that I wanted to move to Paris to study fashion." 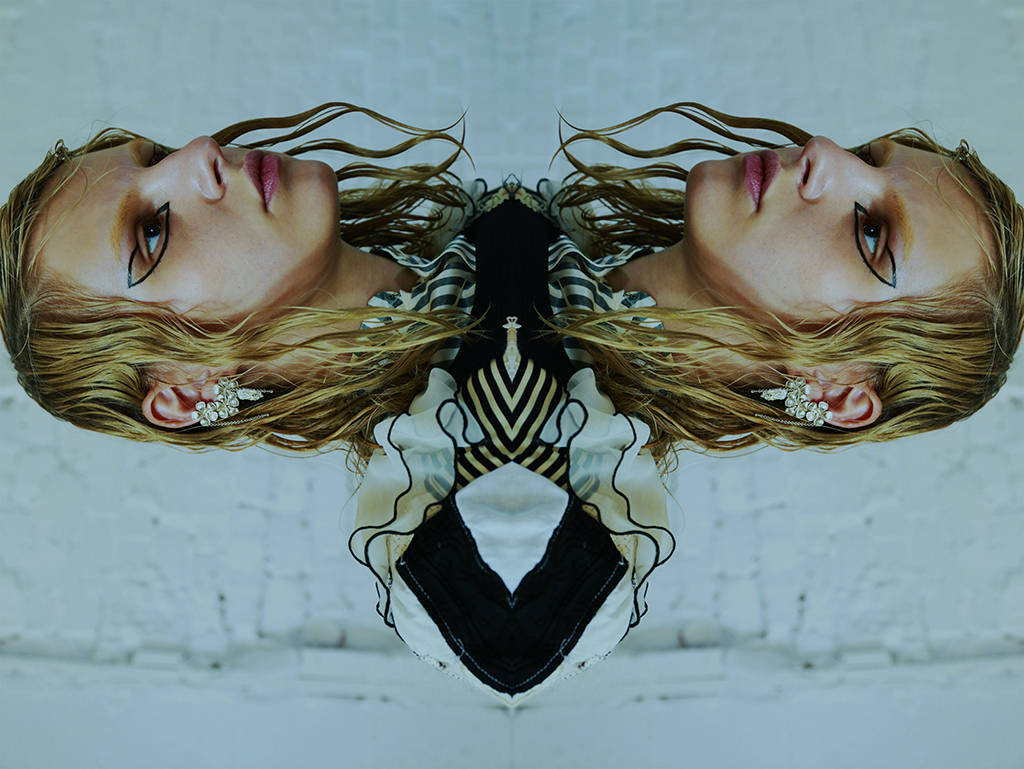 In the fall of 2007, after a harrowing few years of fighting and overcoming cancer, as well as a hard breakup with her fiancé, Hadley sold her business and left home to attend school at Parsons Paris. A bold move, but for Hadley, whose world had been in chaos, the four-year fashion program was a refuge to explore her creativity while learning the science of fashion and sewing.

“I had never lived on my own, I didn’t know anybody there, I didn’t speak the language,” Hadley explained. “But I think I was ready to be challenged and I’m realizing now I was ready to be silent. So I put myself in a situation where I didn’t have anybody to talk to. I would walk out on the street or be in the Metro or go anywhere. I couldn’t understand what anybody was saying, so I just got to be with myself. So it was creatively exhilarating, it was a way to heal, by myself. That time period was more than just being in fashion school, and learning a trade and meeting people and experiencing the world in a different way. [It was] a way, to kind of connect to myself.” 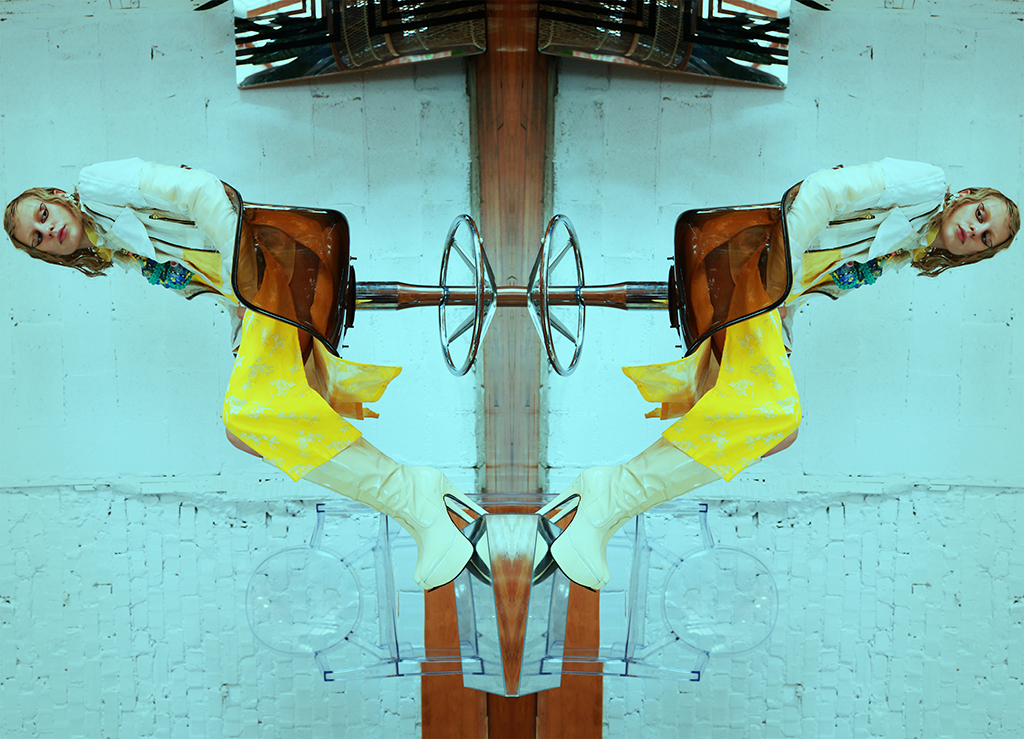 Hadley knew she didn’t want to study fashion in the United States, as she didn’t relate with the American sportswear design that was emphasized at many schools. For her, as a fine artist, Parsons Paris was a perfect fit. She not only learned technical skills such as French couture draping, and patternmaking, but also broader lessons like exploring concepts and building a collection. For Hadley, who had never had any sewing instruction before, it was eye opening.

“You work on patterns and draping on the dress form in this very minuscule way, learning that two millimeters can totally shift the way something fits,” Hadley explains.

Learning the science around sewing brought with it a deeper respect for process and fabrics, giving her the blueprints of garment design.

“Till Death Do Us Part” was the title of Hadley’s senior show and thesis work at Parsons. The small collection, which features ethereal chiffons and textural, synthetic hair pieces, was a “cross-cultural examination of death through garments.” From her first days at Parsons, Hadley knew what her concept would focus on and spent the next few years researching and stockpiling inspiration. Her collection culminated in a fashion show where outside professionals judge the work. After years of research and four months living and breathing her concept, Hadley’s collection won her the title Designer of the Year.

“It was really validating,” she says. “I’m just some girl from Kansas. I want to make these things. They’re weird. They don’t make sense.”

In the fall of 2010, Hadley moved to New York, where she worked on dance costume projects and did some traveling. Then, an invitation from Parsons to return the following May to show a new collection helped her realize where she wanted to settle.

“I knew I wanted to make that work in Kansas.” Hadley continues, “So that January, I moved back to Kansas City to start working on that collection.”

A surprising choice, perhaps, from someone who now had the education and design skills to launch herself in the fashion world, but the same instinct that took Hadley to Paris, brought her back home. 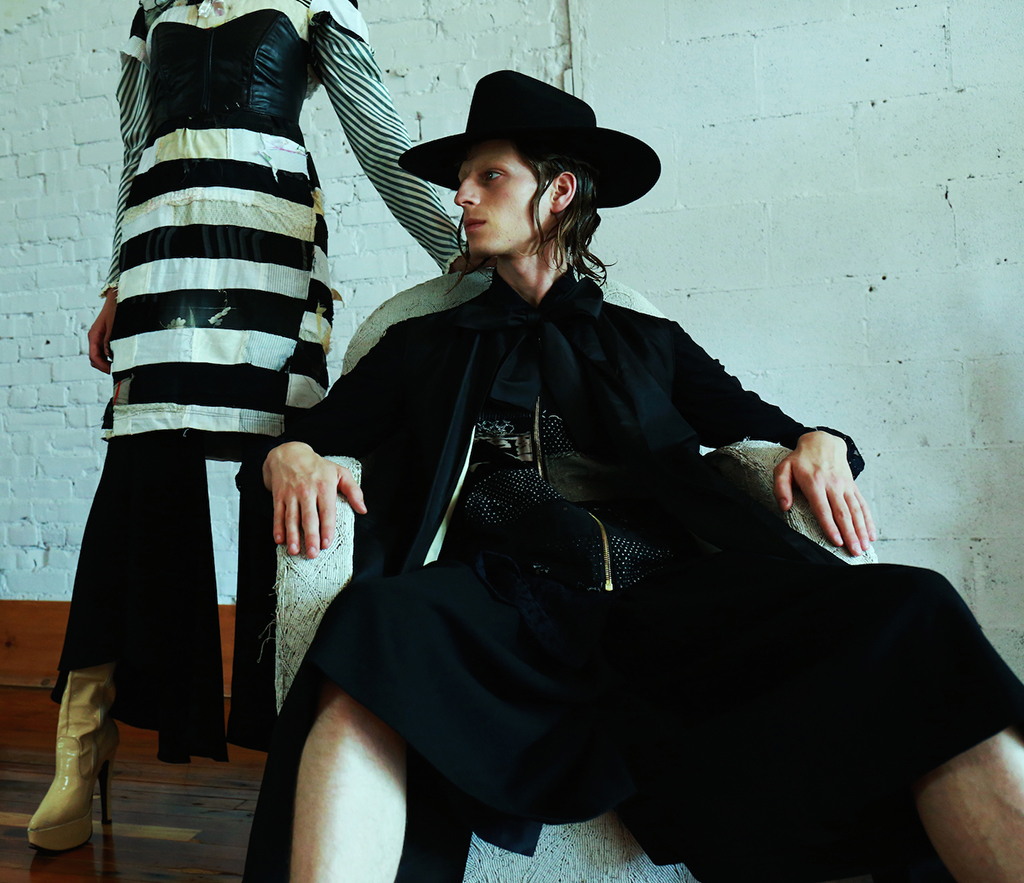 Hadley explains, “I want a simple life so I can make bad decisions, interesting decisions, wrong decisions, right decisions, in this space. Kansas City is that space for me. And honestly I knew this is where I was going to fall in love and ultimately, that connection to another person – having a partnership – is more important to me than making clothes. I didn’t come back to Kansas City to start a fashion career, I came back to find my family.”

Paris of the Plains

Hadley’s showroom in Kansas City sits in the same tiny space where she started her fashion career with Spool. Hadley’s latest collection, “Only Perfect In An Empty Room,” hangs along the wall, a pastiche of patchwork colors and textures. Sleek, carefully pieced indigo motorcycle jackets share a space with a black and white striped, cotton and silk mini dress. Lavender chenille dresses and overalls brighten another corner of the room. A pristine white bomber jacket with mesh sleeves features a pieced portrait of Riley the cat on the back. 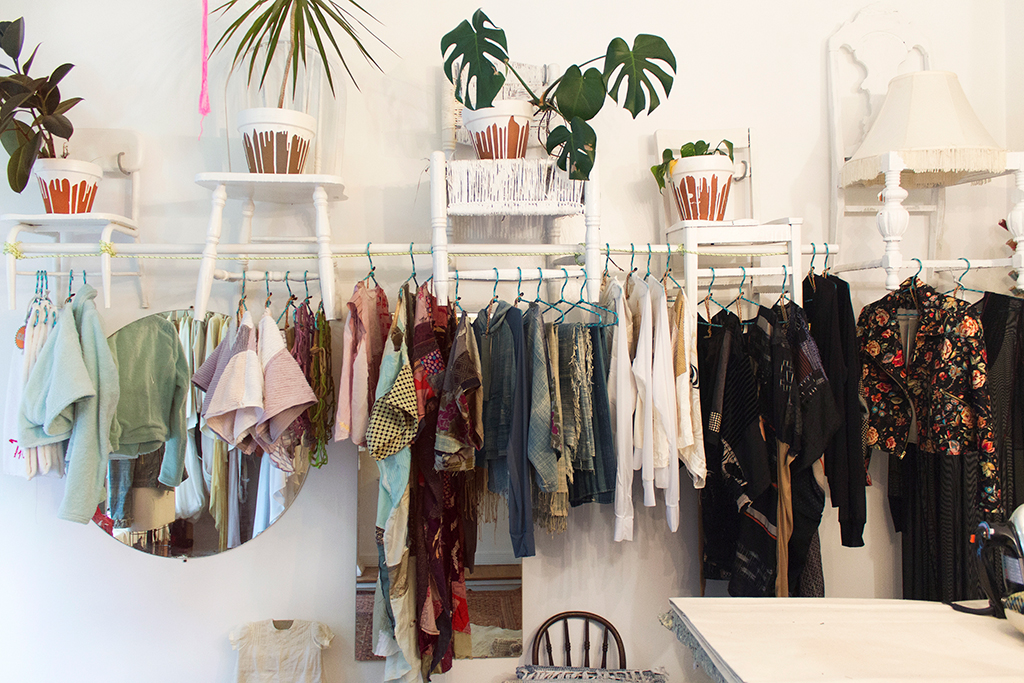 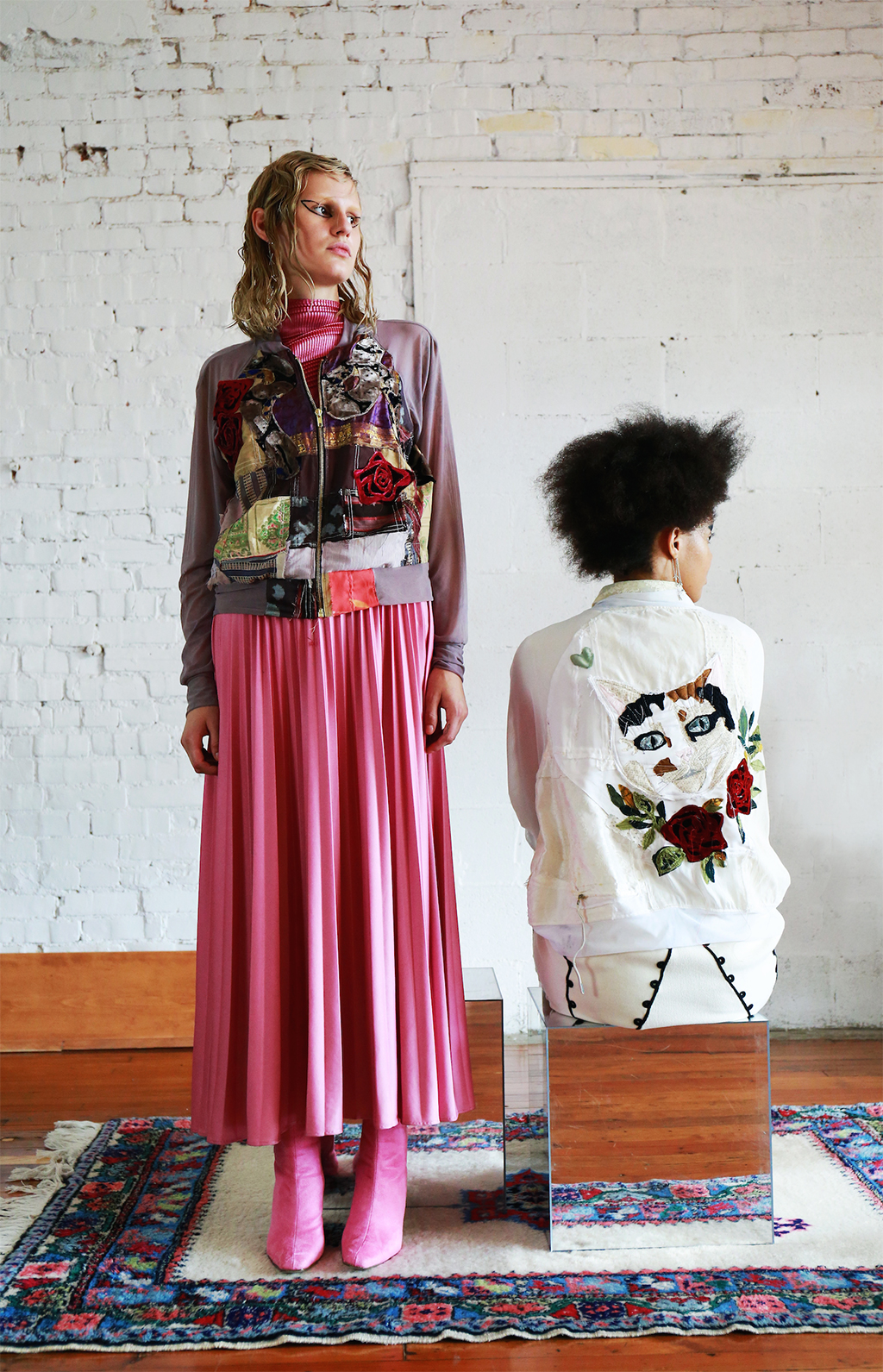 The nucleus of this concept, which Hadley has been working on since 2015, is used and soiled textiles. “It just happened that I was able to get vintage kimono fabric, so it is dealing with that specific size of textile, having to patchwork them together, which is like nothing I’ve ever done.”

Hadley continues, “It’s a very wide net of things that are considered into the collection. I can speak to certain parts of what they are, but it’s kind of my everyday life. There aren’t rules about what can and cannot be in the work. It is a process. I don’t sketch. I don’t plan like that. I kind of just get into the studio and I start making and feeling what it is, what it looks like, how it develops, how I develop with it.”

Hadley’s retail space in Kansas City is one of only three places where her collections currently reside. Her choice to house her work on her own terms came out of her experience of selling her collection at a fashion trade show in Paris, which featured a small group of young designers. There, the hard facts of fashion as a commodity reared their ugly head: Buyers for big companies saddling startup designers with contracts and monetary requirements in exchange for selling their clothes. They also often force designers to make changes to their collection, to make it more salable to their customers. 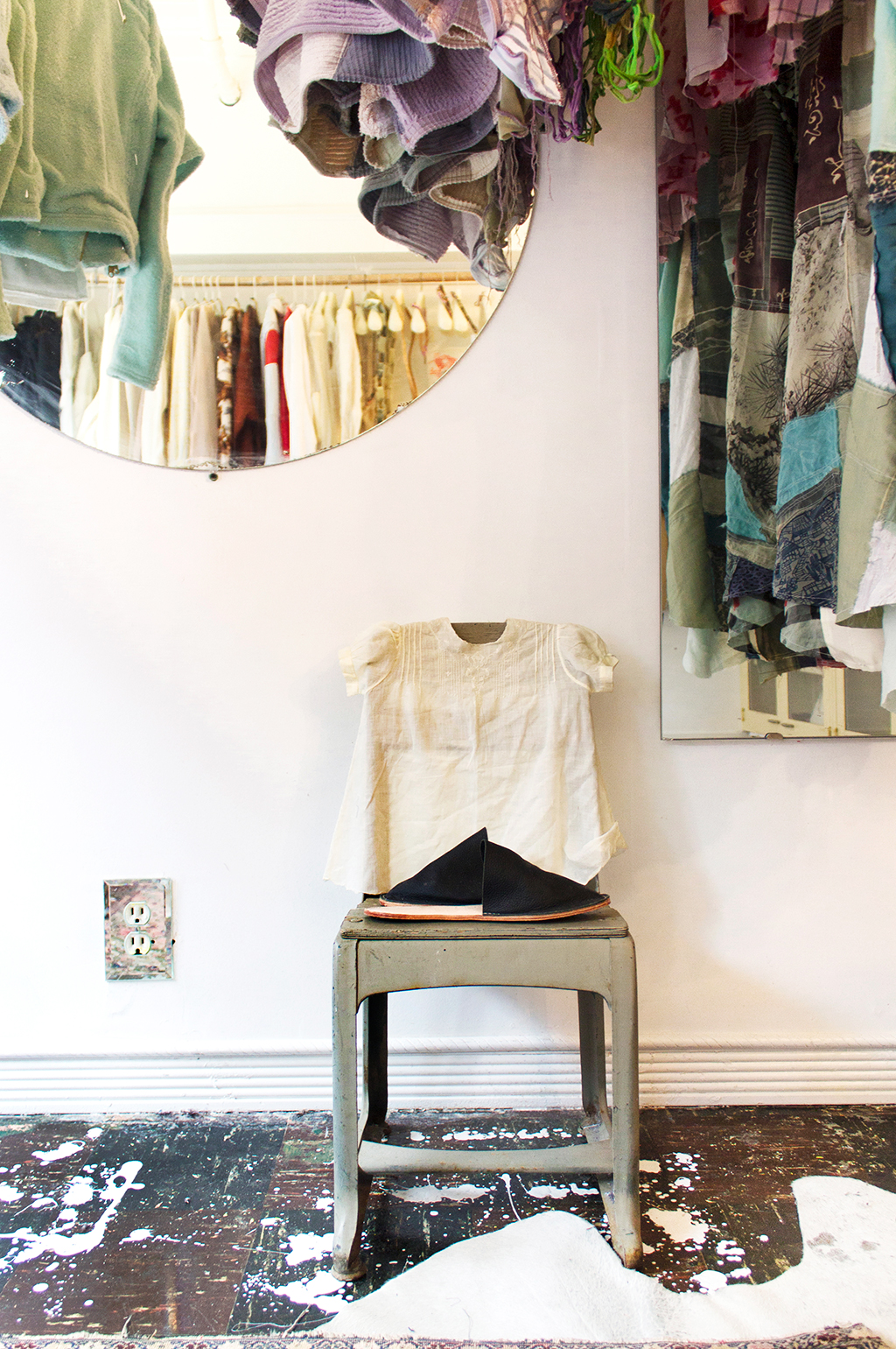 To Hadley, it was more important to be resolute in her creative vision and represent her work to the world in her own space. However, actively creating, housing and selling a fashion collection for a retail customer does not come without its costs. While Hadley devotes most of her time and creativity to her designs, she also has a job to pay the bills—a situation not uncommon, though often hidden, in the world of independent fashion designers.

“It was always important, and it is still important that the integrity of what I’m doing, what I’m making, what I’m surrounding myself—I’m not at the place of compromising myself,” Hadley insists. “So in making those choices, a choice I have to make is to have an income that is not dependent on what people are buying.”

Though Hadley is still conceptualizing the “Only Perfect” collection, she has started to think of her next design approach. This may be a family affair, as she has been collaborating with her husband, a print maker, to design their own digitally printed fabric. 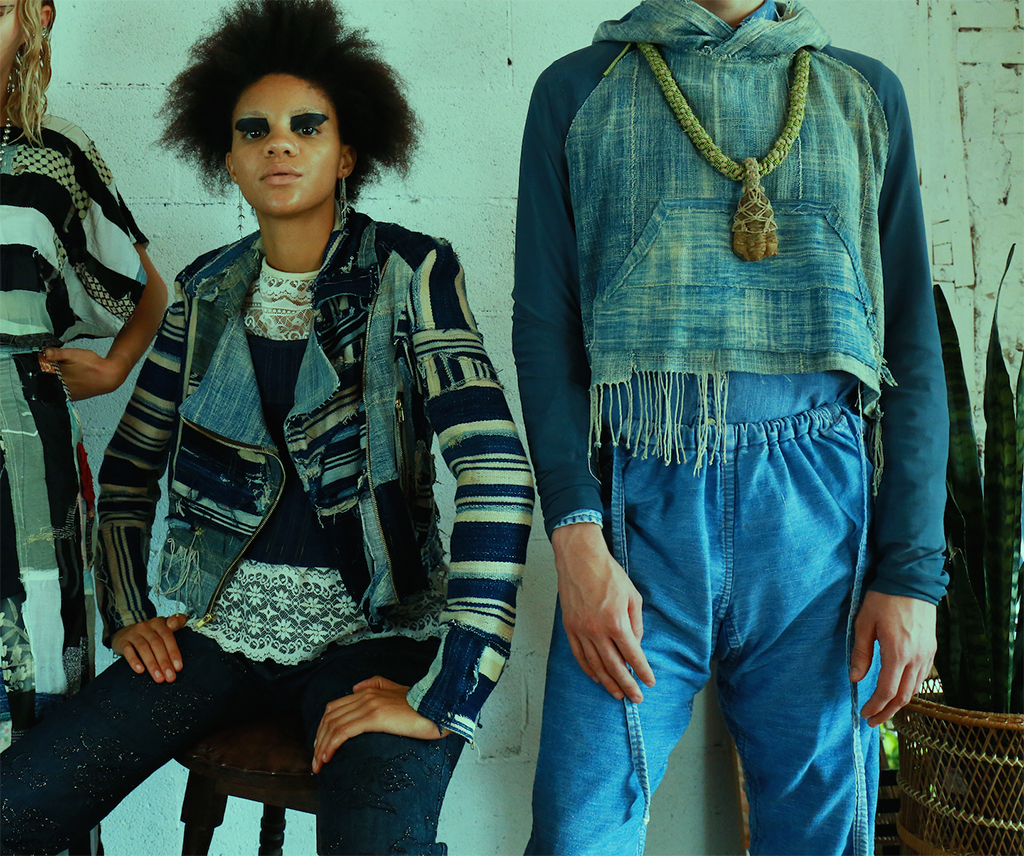 In a world which seems to only celebrate runaway success, Hadley prefers to focus on the long haul, and create and perfect her designs for a future when she can make her living with her art. 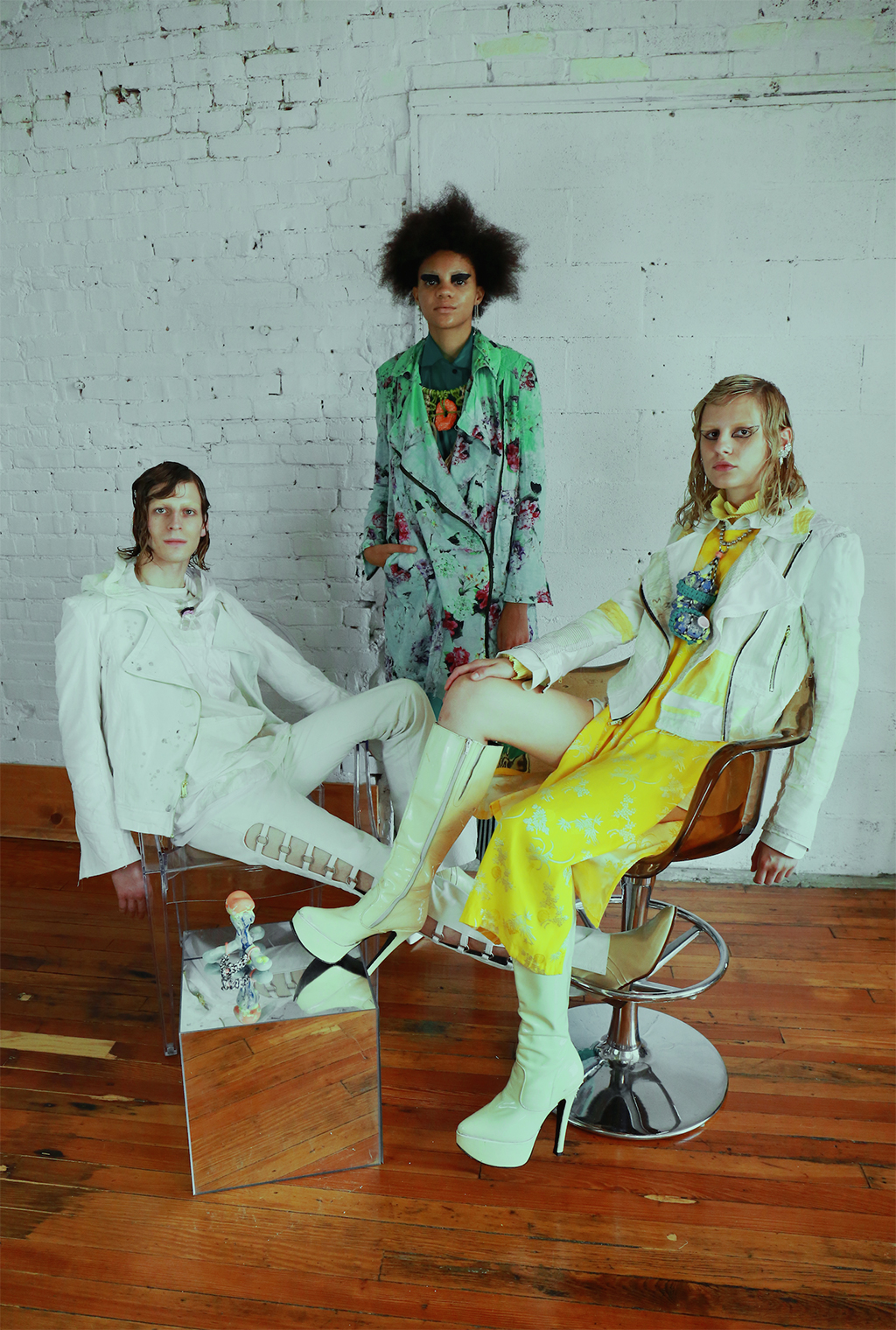 
Betsy Blodgett is the host of the design podcast Hello Atelier! A fashion history and sewing enthusiast living in Kansas, she spends her time traveling, teaching, and moving cats off her sewing table. Follow her projects and inspiration on Instagram and Pinterest. 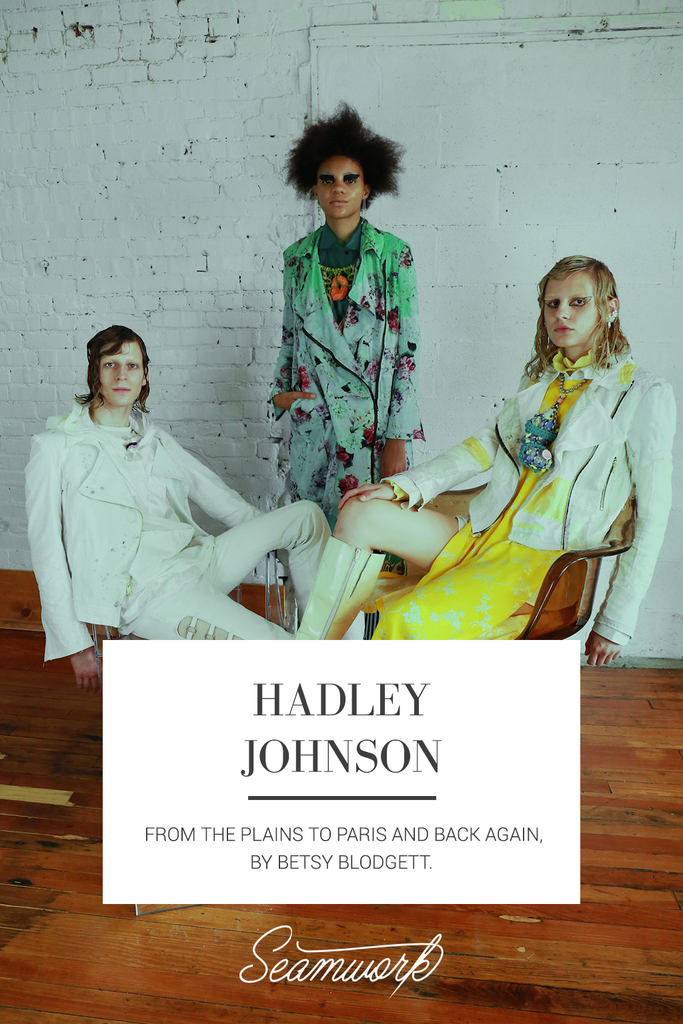