Across generations and language, craft can bind us closer to those we love. By Jessica Yen.

My paternal grandmother was the only grandparent I really knew. The others passed away before I was old enough to know them. Grandma taught me to knit, and it was through crafting that we developed a bond that lasted well beyond that first lesson.

At 12, I’d already picked up crochet, embroidery and sewing, but knitting still that eluded me. Mom pointed at the brightly striped afghans in our living room, all of which had been knit by Grandma, and suggested I ask her to teach me.

Grandma lived an hour and a half away by plane or seven hours by car, so I only saw her a couples times a year. She usually greeted us by clasping our hands and asking about our grades. Then she patted our hands in encouragement before returning to conversation with the adults. Grandma spoke mostly Chinese, which also limited our interactions. My request surprised her, but she agreed.

She brought straight knitting needles and some leftover acrylic yarn to the next family event. We huddled on a couch away from the rest of the family, where she showed me how to cast on. Grandma had the gnarled, swollen hands of someone who’d worked hard her whole life. While my index fingers rested flush against the aluminum needles, arthritis warped her knuckles so badly that her fingertips bent off at right angles. As we worked through knits and purls, I shyly asked Grandma about her childhood. 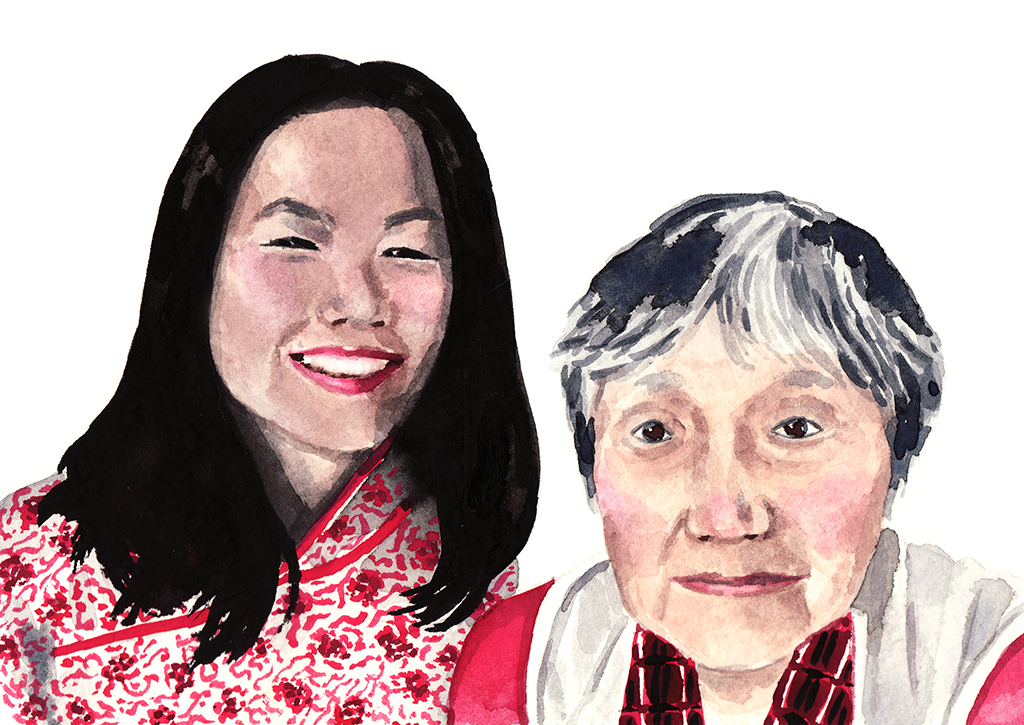 Grandma was born in China in the 1920s. I didn’t yet know enough Chinese history to realize that the first 25 years of her life were defined by war. There were warlord turf battles (her grandfather once ran China’s second largest triad), a protracted civil war between Communists and Nationalists, then the Japanese invasion and World War II. Grandma had lived through all of this, but she just waved me off with a curt, “You don’t want to hear about that; those were hard years.” Still, it was the first real conversation we’d had. I sensed that she, too, felt the generational, linguistic, and cultural chasm between us. I kept bringing knitting projects to family events so that I’d have an excuse to spend time with her. Knitting became my vehicle to develop a relationship with my grandmother.

After a while, Grandma began revealing small tidbits about her life in China. As a child, she and her girlfriends sometimes knit in class, projects sandwiched between desk and lap as they feigned interest in the teacher’s lectures. She laughed as she said this, delighted at the memory that drifted to the surface after all these years. Often she only had enough money for one sweater’s worth of yarn. The following year she ripped out last year’s sweater and reused it in a new design. She waved her crooked hands as she said this, and I imagined a pullover transforming into cardigan, crew neck to v-neck, ribbed hem to folded hem.

If I asked Grandma point-blank about herself, she usually demurred. But if I waited until we perched side by side, our hands companionably occupied with needles and yarn, the stories bubbled up spontaneously. She told me about fleeing cross country at the age of 13, her mother and younger cousin in tow, when the Japanese invaded. She told me about raising seven children on her husband’s modest salary. There was just enough food money to moisten rice with bacon oil and serve it with a few pickled vegetables. She waited until everyone else was done before she ate, standing at the kitchen sink and scraping rice out of the bottom of the pot.

Usually it was just the two of us. I began to tell her about my college major and my various jobs. My cousins were all headed for medical school, dental school, or law school, but I’d chosen Chinese Literature because I wanted to connect with my cultural heritage. Grandma was the one person in my life who anchored my connection to my roots, and she didn’t judge my decisions the way the rest of my relatives did.

In my 20s I began sewing garments, and our conversations expanded to include clothing. Grandma, it turned out, had a real eye for fashion. She was a no-nonsense woman who sewed Dad a suitcase full of indestructible plaid shirts when he left for college, but she enjoyed my whimsical tastes. “What did you make this time?” she’d ask, clucking appreciatively at my Kelly green shift dress with giant eyeglasses printed on it. We were an island of two as we scrutinized flat felled seams and piped necklines.

“Much nicer than what I made in the factory,” she’d sigh once we finished dissecting the garment’s innards. Another wartime story revealed through our mutual love of clothing and craft.

In the final years of her life, Grandma suffered a series of heart attacks and strokes. Knitting was the last thing she could do. My aunt bought her size 13 needles and Aran weight yarn and Grandma knit up scarf after scarf, glad to still be useful. We snatched up those scarves and paraded them in front of her. Grandma pretended not to notice, but a pleased smile played on her lips.

Her last stroke came in the spring of 2013 and robbed her of control over most of the right side of her body. Knitting was now impossible. She often refused to speak English with the hospital staff. Then they’d leave and she’d stage whisper to Dad and me, “That’s not true! I ate well yesterday.”

“You need to cooperate with them!” Dad said. Grandma said nothing, but she had a glint in her eye. She was slowly preparing to leave us, and she was less and less interested in playing by someone else’s rules. All our exchanges now took place in Chinese. As a child, I’d sometimes found Grandma’s Chinese hard to understand. She spoke with a heavy Hubei accent that favored the second and fourth tone, and she sometimes did things like pronounce the word for “medicine” like the one for “friend.” After all these years, understanding Grandma came naturally.

After a particularly disheartening visit to the nursing home, when even the subject of knitting and clothing failed to rouse much interest from Grandma, I laid in bed and cried. Grandma was dying and I couldn’t do anything about it. I’d tried every trick I could think of, even pulled out a magazine to compare notes on which Oscar dresses we liked best and why, but nothing worked. Grandma was tired. On some level, I couldn’t blame her. She’d had a hard life, and there was so little left for her now.

So I did the only thing I could think of. I knit her a pair of socks. I selected a self-striping yarn filled with her favorite colors – reds, purples, and pinks – and used a pattern that constructed the socks on the bias. I felt sure that the knitter in Grandma still existed, even if she only appeared for a minute or two at a time, and I believed she’d appreciate these touches.

When I showed Grandma the socks, she gave me the widest smile I’d seen in months. When I slipped them on her feet she kept staring down at them in wonderment, and then staring up at me in appreciation. Dad feared the nursing facility would lose the socks, so every time I left I slipped them into my purse. I always felt guilty taking them from her, but her eyes inevitably lit up the next time she saw them, which was a small consolation.

I brought Grandma’s socks to her funeral. Rigor mortis had stretched her features into a grotesque caricature of the woman I’d known; as long as I kept my eyes on her face, I could pretend this had happened to someone else. But the minute I looked at her hands with those joints bent at odd angles from one another, it finally hit me that she’d passed. I cried and fled the open casket, then came back and cried some more.

“I love you Grandma,” I whispered as I slipped the socks into the casket. The wool/nylon blend held up well through multiple washings, the colors still cheerful after all this time. To me, they represented Grandma’s mix of hard pragmatism and personal style.

There was so much more that I wished I’d asked Grandma, but the reality is that she was a hard woman to know. Crafting created the opportunity for a relationship, and I’m grateful for the memories I have. I heard stories she’d never shared with anyone else. When I was with her, I didn’t worry about the family rivalries swirling around me. I had Grandma. The rest didn’t matter.

We’re approaching the one year anniversary of Grandma’s passing. In my stash sits a wool/nylon sock yarn in reds, pinks and purples. It’s the sister skein to Grandma’s. When I’m ready, I’ll make myself a matching pair.


Jessica Yen is a writer, blogger, knitter and sewer based in Portland, OR. 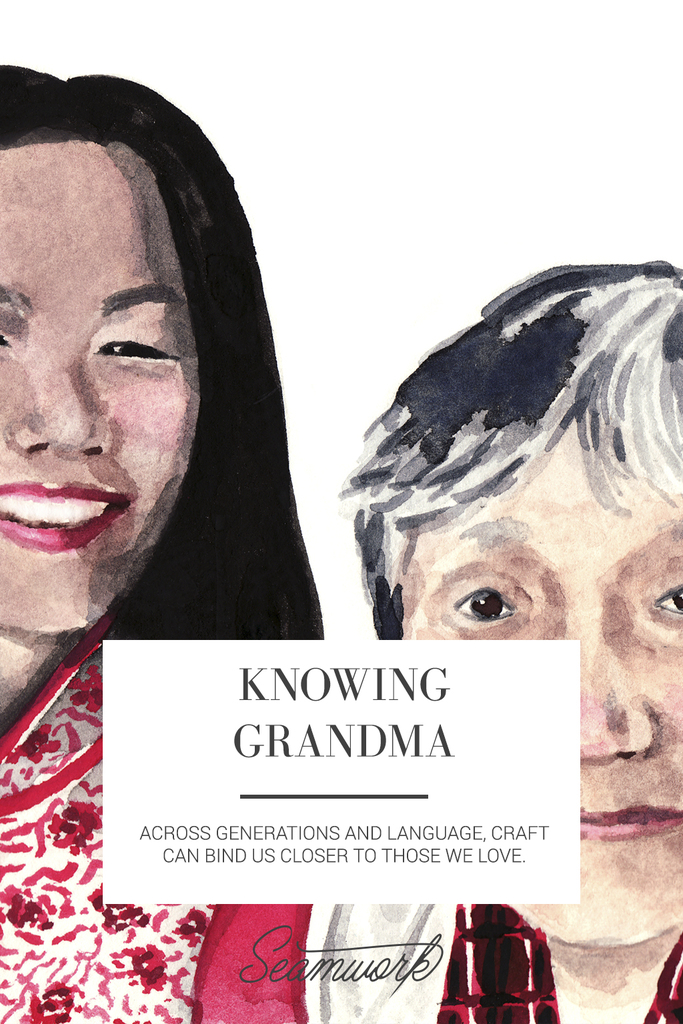