A uniform holds the key to an alternate way of life, <br>by Megan Hippler

Throughout my two years as an algae farmer in northwestern Australia, I wore company-supplied steel-toed boots, heavy navy pants, and long-sleeved button-down shirts in neon yellow, navy, and reflective stripes. I asked for replacement uniforms as seldom as I could, wearing my uniforms until the rips, stains, and rare chemical burns made them seem unprofessional.

In a small coastal desert town, perfectly broken-in clothes were a luxury, and I’d joined the company to help make the world a better, cleaner place, so it felt wasteful to throw out clothes that could be fixed. I firmly believed that “reduce, reuse, recycle” should include refuse, repair, repurpose, and rot, if only my sewing skills could live up to my beliefs.

Until then, I kept the spare buttons inside the tiny sewing kit I’d bought from the grocery store, ready for the day I was ready to tackle the growing pile of clothes that needed mending.

My mother had taught me how to reattach buttons when I was young, but her method was all practicality and speed with no finesse. She doubled up her thread, knotted the ends together, and ran the needle through the button holes until she was nearly out of thread. Then she’d cut the needle free and knot the thread again, figuring more thread kept the button more secure.

I assumed someone had optimized the method so the repairs wouldn’t be so obvious. The YouTube experts told me I shouldn’t knot either end of the thread, but instead I should first make a few running stitches to secure the thread to the garment while leaving it loose enough to flex as the button went through the buttonhole. If the button can’t flex, the thread wears and breaks. Then the button comes loose again no matter how many layers of thread run through the holes. 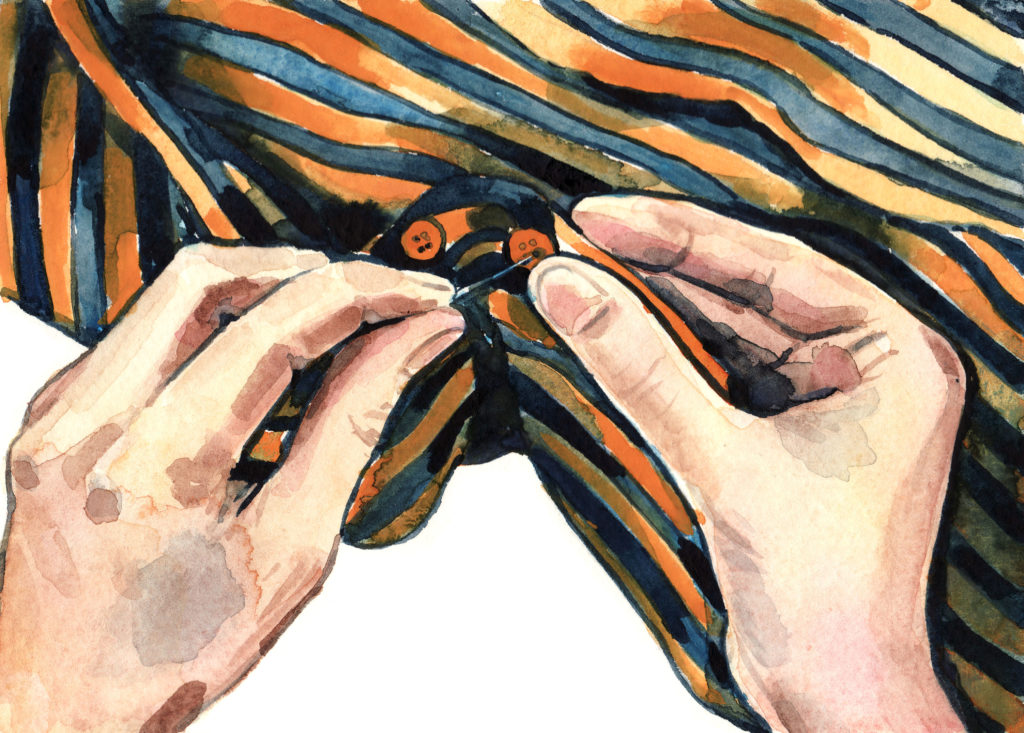 Armed with my new instructions, I took the mountain of clothes from the top of my refrigerator to the large table on the patio outside the communal kitchen and threaded the needle. The running stitches were simple, but as I held the button in place, I started to doubt myself. I knew it didn’t need to look perfect. It simply needed to work for a few weeks, and if I had to fix it again, I would be disappointed but understanding. I used the buttonholes to guide my stitches, still following the instructions as accurately as I could. The first reattached button sat lopsided but its size hid most of the mess. The repair didn’t live up to the image in my head or the reality of the manufactured buttons, but it seemed secure enough to function, so I decided to try another one.

As I finished an equally messy repair job on the second pair of my partner’s shorts, a few people settled at the other end of the table, relaxing at the end of their shift, but I stayed focused. I cut the loose button off a pair of my own shorts before sewing it back on with growing confidence and a little more precision.

As more people joined the table, a few of them asked what I was doing, seeming surprised to find someone doing something so domestic in the on-site housing. After all, someone else cleaned our rooms and washed our bedding for us each week. I answered their questions and brushed off their jokes that I could fix their clothes, too.

Maybe I could fix them, but I was too afraid of ruining someone else’s clothes to consider offering my help.

I struggled with the stiff cotton of the uniform pants. The needles in the kit were tiny and the thimble’s thin plastic top pressed into my finger. The town had no craft stores, so I had to use what I had. I forced the needle through the fabric in slow pushes and used different areas of my fingertip until the pants were functional again.

My co-workers had filled the table by the time I turned my attention to the work shirts. I left the small tears and holes alone. I wasn’t sure I could make them look any better, and the nature of our work meant everyone had these minor rips around the waist and the cuffs. As I was finishing the penultimate shirt, another co-worker sat down with a beer and looked at me like he couldn’t believe what he was seeing.

“Are you fixing a work shirt?” he asked.

“Just putting a button back on,” I said. I didn’t want him to think I was doing anything advanced.

“Why bother? Just ask them for a new shirt. They’ll give you as many as you want.”

“It only takes a minute or two, and the shirt’s fine otherwise,” I said, but it hadn’t occurred to me not to fix them.

He shrugged and started a conversation with the person next to him.

I could tell I hadn’t convinced him, but I didn’t need to. He could ask for more shirts if he wanted, but I would take something they were going to throw away and make it useful again. I was living and working with the people who fixed machinery, electrical equipment, plumbing, and everything else on site, and I was happy to know I had the skills to fix something that they couldn’t.

It was dark when I finished the last shirt. I clipped the final thread, shook out the shirt, and looked at the button. From the front I couldn’t tell that it had been replaced, and surely no one else would look that closely anyway. I folded the shirt and added it to the stack of fully repaired clothes, taking a moment to revel in the accomplishment. I’d set out to make the clothes functional again, and I’d managed to do that. They didn’t all look terrible, either. I packed away my little kit and took the pile back to my room, believing I could reattach any button that anyone lost. Maybe I could even try something more complicated.

Weeks later, when my partner asked if I could fix the torn pocket on his personal shorts, I said I could. Then I figured out how to do it.


Megan Hippler is a writer whose works have appeared in the anthologies The Poetry of Yoga, Vol. 2 and Re/Coded. While she never became a quilting pro, she continues to dabble in sewing, knitting, and the occasional carpentry project. 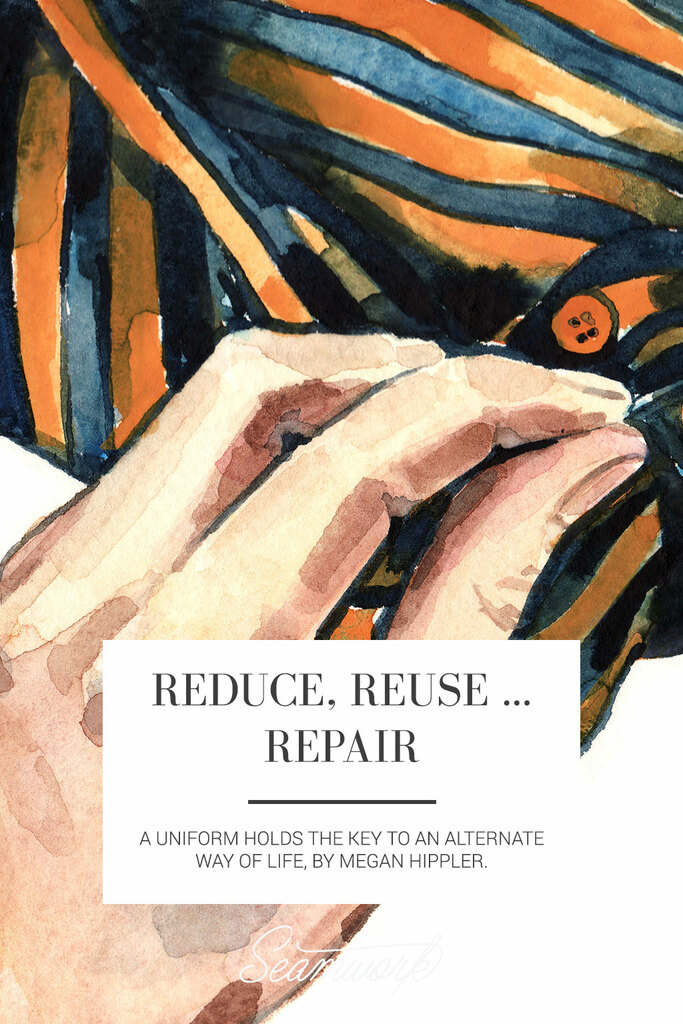