Connecting with my Filipino culture by learning how to sew terno. By Nicole Angeline.

Statement sleeves are all the rage in the fashion and sewing community recently but have been embedded in Philippine cultural dress for the better part of two centuries. What started as a repressive way for Spaniard colonizers to cover indigenous women evolved into the stylish and distinctive terno that is experiencing a resurgence in Filipino culture. 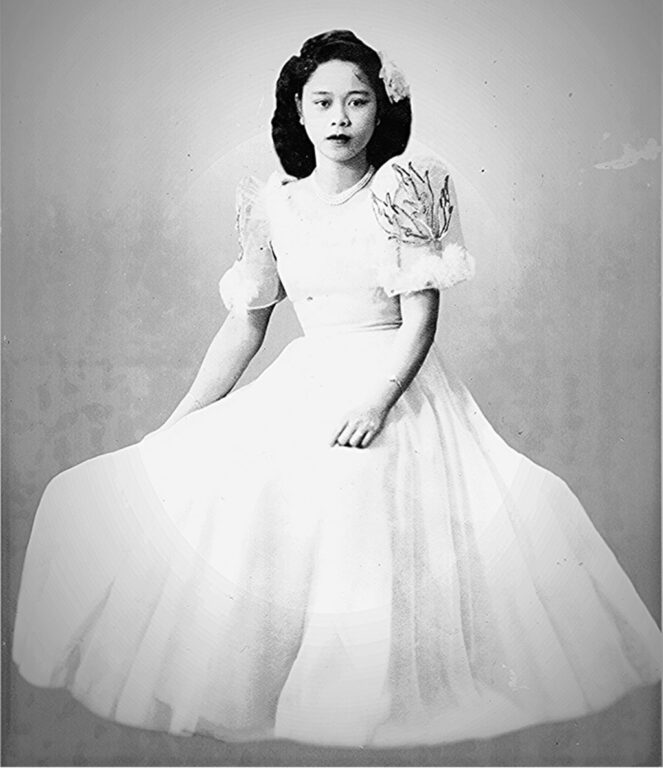 My Grandma Veronica during her debut on her 18th birthday. 1948, Manila.

October is Filipino-American History Month in the U.S. I have spent this month reflecting on my upbringing as a child of Filipino immigrants and the bicultural identity I have formed. When I learned to sew last year, I was determined to learn how to make terno sleeve and become skilled at incorporating it into my sewing practice. For me, it’s about taking part in the community-wide experience of wearing terno and proudly declaring my identity as a member of the Philippine diaspora.

In this article, I’ll walk through an abridged history of how we got to the modern terno sleeve, including my personal connection to this piece of my Philippine heritage. Then I’ll share a project I made, reclaiming the terno for modern times.

Big sleeve energy: What is the terno?

The term “terno” actually refers to the matching of various components of Philippine dress, for example, a top and skirt made in the same fabric. Therefore, “terno” is technically used to describe an outfit on the whole. However, oftentimes, when people refer to the terno, they are now referring to the unique sleeve. The sleeve is upright, has a rounded top, flat side, and is straight cut across the bottom above the elbow like clipped butterfly wings.

I never actually heard the term terno used to describe the various outfits I would don to perform traditional cultural dances growing up—I had always used the term “Filipiñana.” For the purpose of this article, I’ll continue to refer to terno as a whole outfit or the sleeve itself. 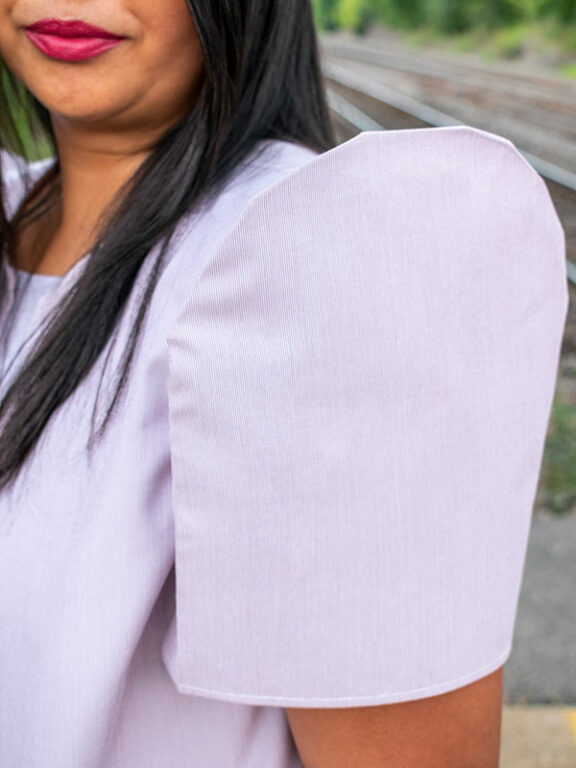 My most recent terno project. 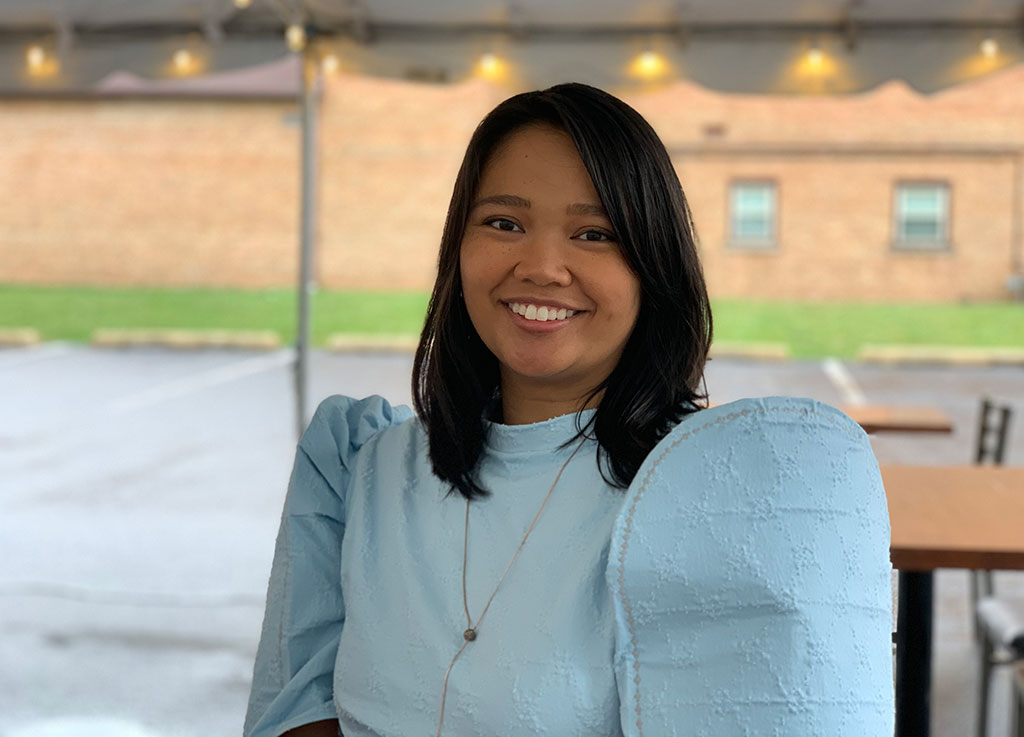 It’s about taking part in the community-wide experience of wearing terno and proudly declaring my identity as a member of the Philippine diaspora.

Before Spanish colonization, indigenous women wore simple garb appropriate for the tropical climate, typically including a tube skirt and a loose-fitting top or no top at all. Then, the Spaniards arrived and were scandalized by how women dressed—so they introduced Catholicism and voluminous layers of clothing to cover women.

Over time, a triangular-shaped shawl (“pañuelo”) was added over a loose-empire waist top with large bell-shaped sleeves that came down to the wrist (“camisa”), and the tube skirt evolved into the voluminous “saya” skirt with a rectangular piece of fabric (“tapis”) covering the saya. The “traje de mestiza,” as it became known, was influenced by European Victorian fashion of the era, and was probably very hot to wear.

Following Philippine Independence from Spain in 1898 and during the U.S and Japanese occupations through World War II, the volume of the traje de mestiza became closer to the wearer's body. The saya adopted a more streamlined look, rather than the earlier iterations, which required several petticoats. People no longer wore the saya with a tapis, and the pañuelo was altogether eliminated. The bodice of the camisa became more fitted, and the sleeves were shortened and began to take the recognizable shape we see today. Around this time, it became popular to join the bodice and skirt to form the terno. Since then, the terno has been heavily defined by the structured butterfly sleeve and evolved alongside Western fashion. 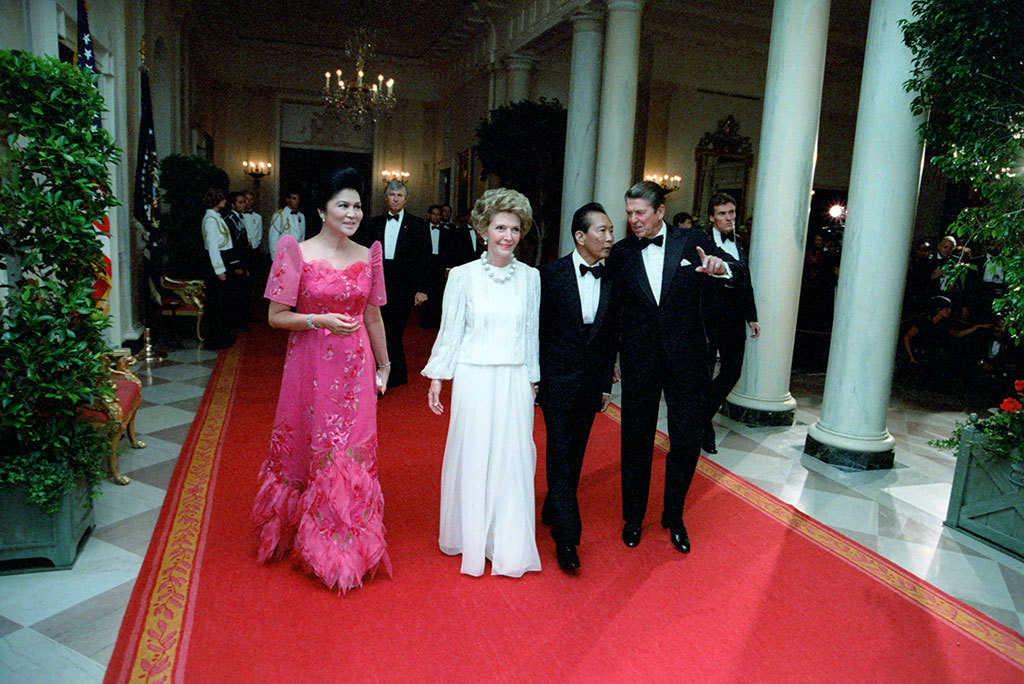 Imelda and Ferdinand Marcos with Ronald and Nancy Reagan, 1986.

The style entered the wider American consciousness in the 1980s, when Imelda Marcos, the wife of Philippine dictator Ferdinand Marcos, wore terno to a state dinner during the Reagan administration. The fall of the dictatorship in 1986 signaled a decline in terno—because of its association with the opulence and corruption of the Marcos regime. In recent years, the terno has made a significant comeback as a symbol of Philippine national style and identity, with design competitions like TernoCon and retailers like Vinta Gallery and Anthill Fabrics offering ready-to-wear casual and formalwear styles.

Growing up, my Lola (“Grandmother” in Tagalog) Ester would teach my sister, cousins, and me traditional Filipino dances. She would make us terno to wear, but I never really saw them as anything more than costumes.

My Grandma Veronica embodied this style at her 18th birthday debut in 1948, and my Grandma Ebing wore terno to my parent’s wedding in 1982, in a bright teal color to match the decade’s fashion.

As I’ve gotten older, I’ve come to appreciate the sartorial distinctiveness of the terno, and am proud that it’s woven into my history in such a memorable way. As a newer sewist, it’s my dream to learn to craft terno and bring it into a new era for myself. My first attempt last year was such a rewarding experience to connect with my Filipino culture by making this garment.

Another reason it’s been important to me to work on creating terno, particularly the terno sleeve, is that I very rarely see it worn by people who actually look like me. As in many cultures, the most visible examples of "beauty" in Philippine fashion and popular culture center around traditionally European characteristics: fair-skinned, slim, lighter eyes, sharper nose, oval shape faces. I cannot call myself any of these and thus grew up with a lot of confidence issues relating to my physical appearance and my identity as a Filipino-American. Most examples of the terno are worn by women of these traditional, European-centric Filipino beauty standards. 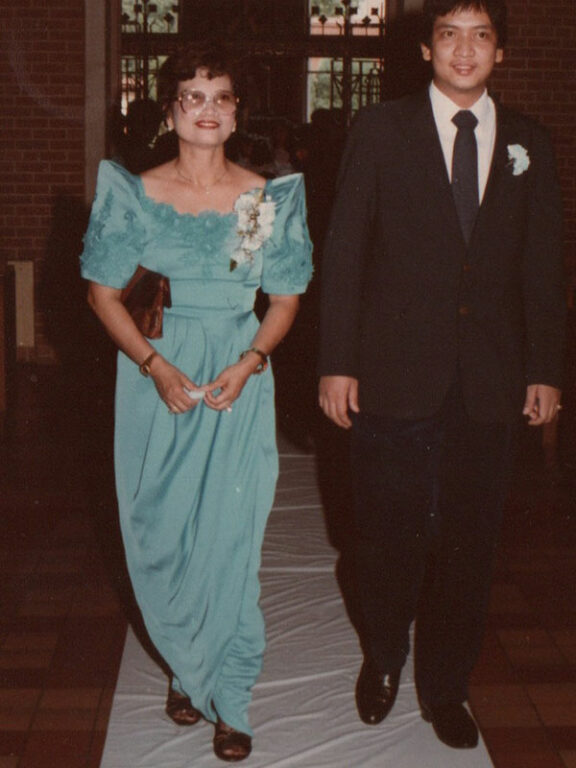 As a woman, I have grown to accept that the beauty standards of the Philippines do not define my own beauty, and I hope to convey that message to anyone who may have felt similarly about their own body. 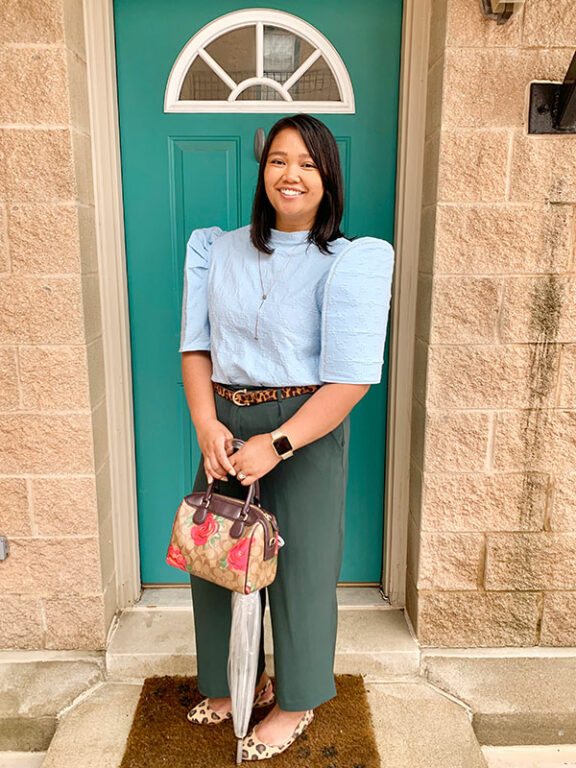 
I’ve come to appreciate the sartorial distinctiveness of the terno, and am proud that it’s woven into my history in such a memorable way.

To take the terno, make it myself, and wear it proudly is the ultimate declaration of the terno belonging to members of the Philippine diaspora of all shapes and sizes. That’s why it’s important to me.

Learning to Craft the Terno

Drafting the terno sleeve is a unique and challenging process—there are master artisans who dedicate their work to making these sleeves. Because of its height, the shoulder point of the sleeve is much taller than the average puff sleeve. The sleeve also needs to be wider to create the folded edge on the sides. A series of pleats achieve the rounded edge at the top. The sleeve itself is traditionally drafted using the wearer's proportions, making ready-to-wear items somewhat of a challenge to fit.

As far as I’ve been able to tell, there are no ready-to-wear options available for a woman my size. If you are interested in learning how to draft the sleeves, there are a variety of YouTube videos out there, including one from a friend and seamstress Shilyn. Everyone drafts in different ways, but Shilyn’s method is the traditional one drawn upon from pattern books from the Philippines. 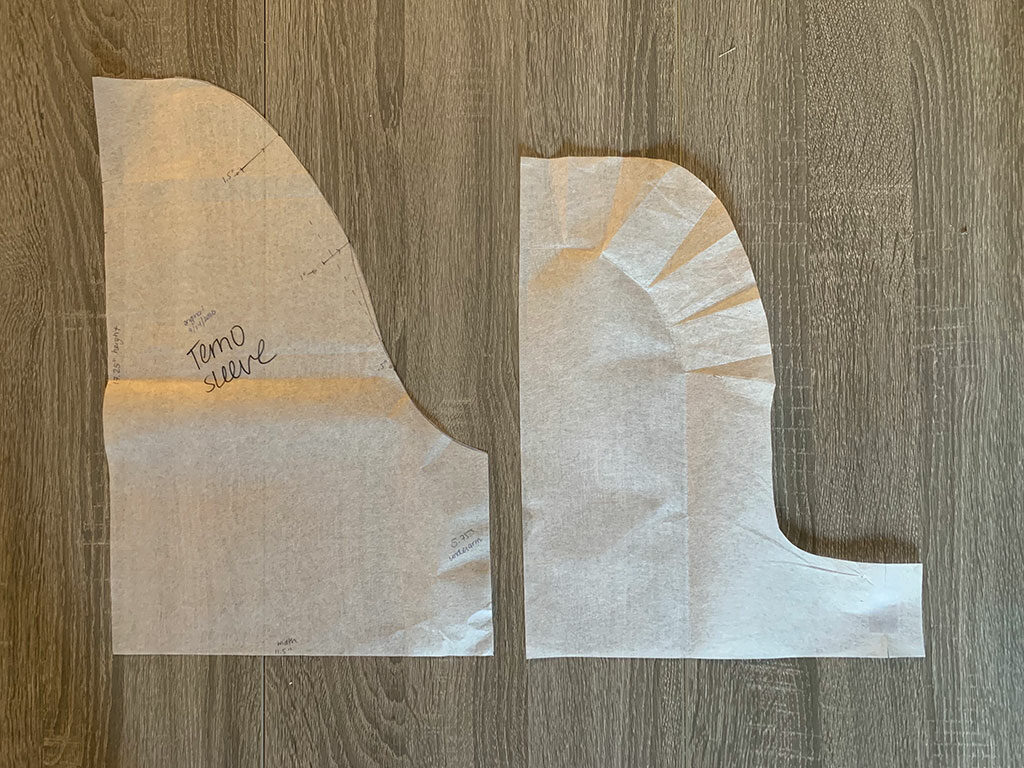 Drafting the half-sleeve on interfacing. Left: my first attempt based on body measurements. Right: the final sleeve form.

A note on cultural appropriation

I am not sharing a how-to on drafting the sleeve. I don't want to enable folks who think the sleeve simply looks cool/stylish/fashionable to try on a piece of my culture on themselves. As an individual, I don’t seek to gatekeep the terno, and in some instances, would be delighted to see some non-Filipino wearing terno. However, it’s generally not appropriate for people (particularly those from a privileged group) to decide something unique to another’s culture (particularly one that members of the former population have oppressed) is something they want to try without proper context and appreciation. 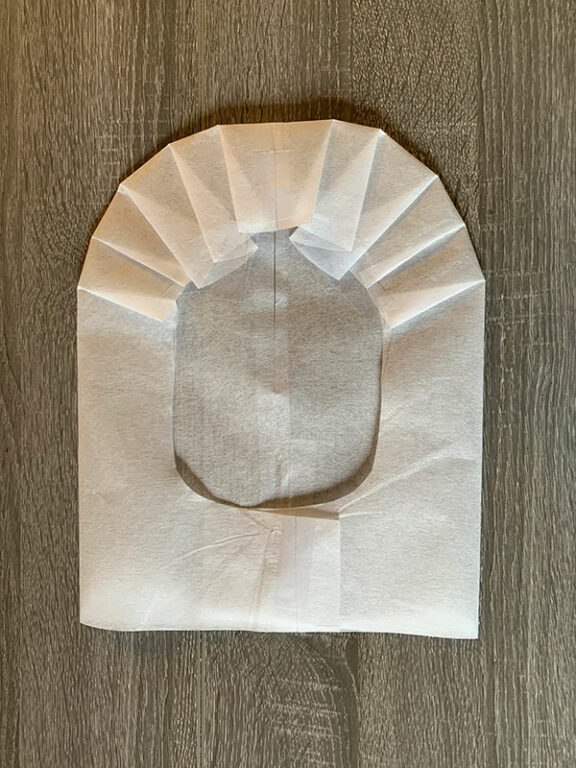 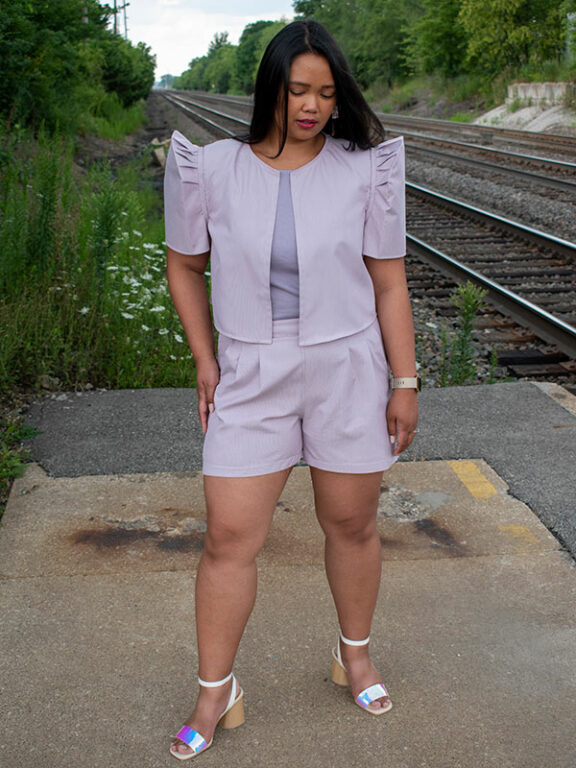 The Seamwork Liliana with terno, worn with the Emerson shorts from True Bias.

This make was the second time I’ve made the terno sleeve, and it took many iterations to get the sleeves right. For the jacket, I chose the Seamwork Lilliana.

Fabric choice is important for the terno sleeve because it has to be stable enough to hold the sleeve shape. I chose a no-name remnant fabric that I found at Walmart that I intended to be toile fabric, but was pleased enough with the result that I went and made the full terno with it! This fabric is structured and has no stretch, but when I assembled the sleeve, it still was not as crisp as I liked, so I took it apart and applied fusible interfacing, and it made all the difference. Instead of attaching the sleeve, I bias bound both the sleeves and the jacket and hand-sewed hooks and bars so that I can remove and store the sleeves flat. 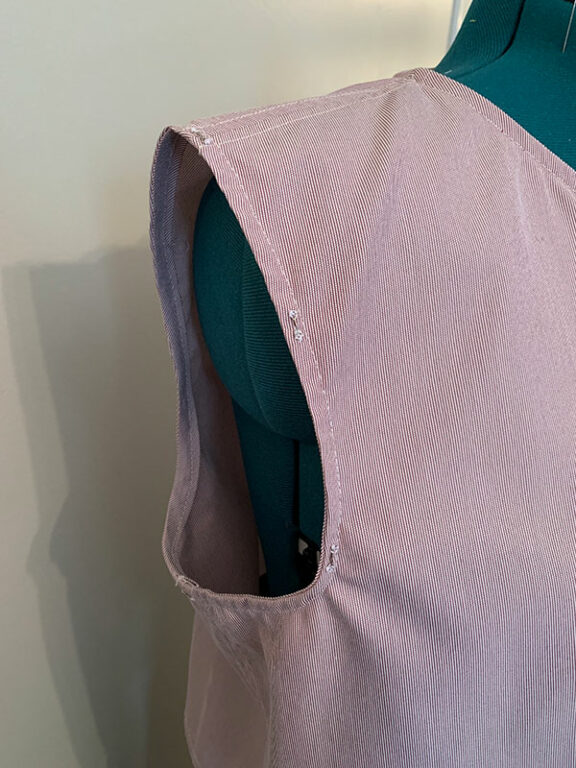 The armsyce of the Lilliana jacket with hand-sewn bars. 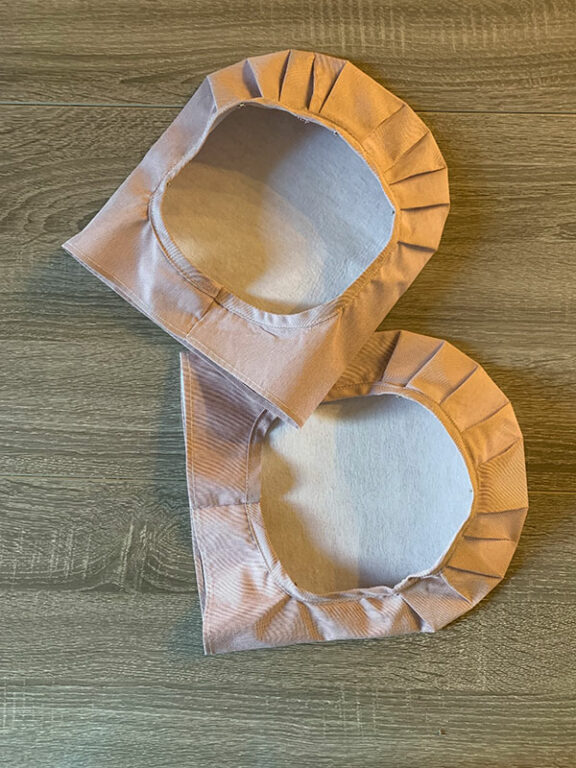 
At the end of the day, making the terno gives me the ultimate sense of sewing accomplishment, and I left this project dreaming about all of my terno makes to come. 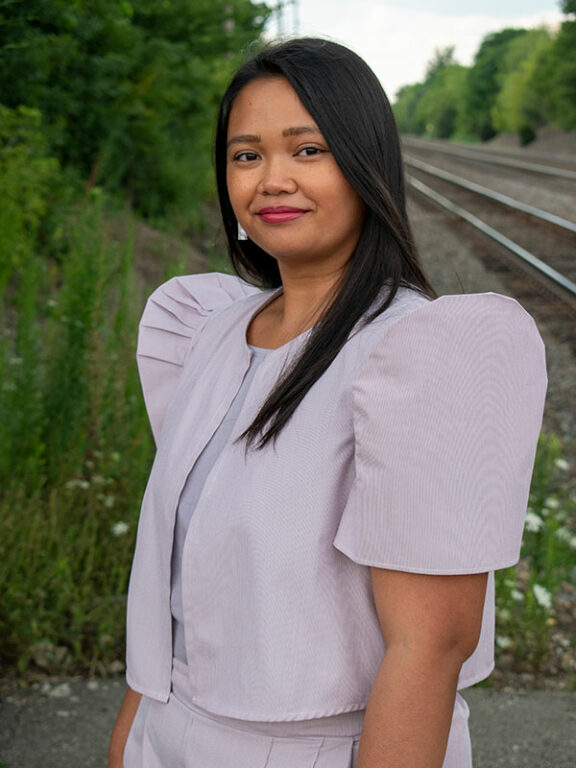 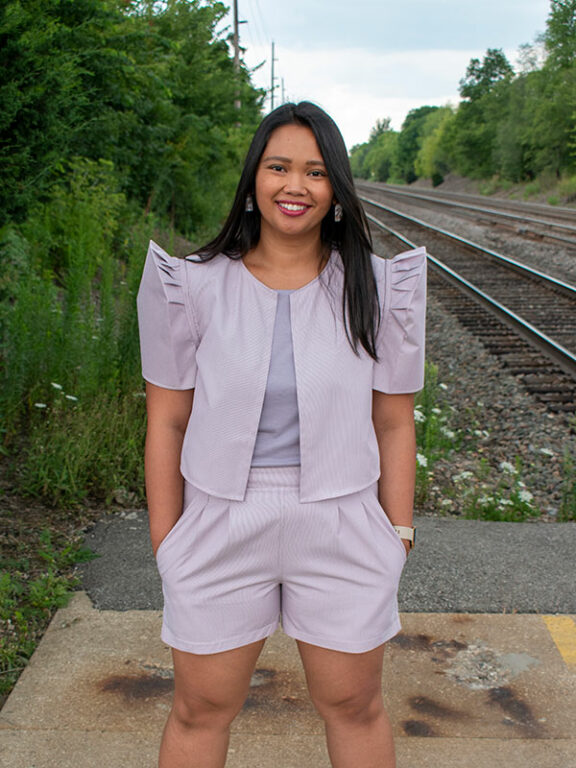 
Like many, Nicole Angeline learned how to sew when masks were in high demand, but she is now an avid garment sewist. Learning how to sew her own clothes has provided a great creative outlet to balance her day job as a lawyer. You can also find her co-hosting the Asian Sewist Collective podcast, and on Instagram @nicoleangelinesews. 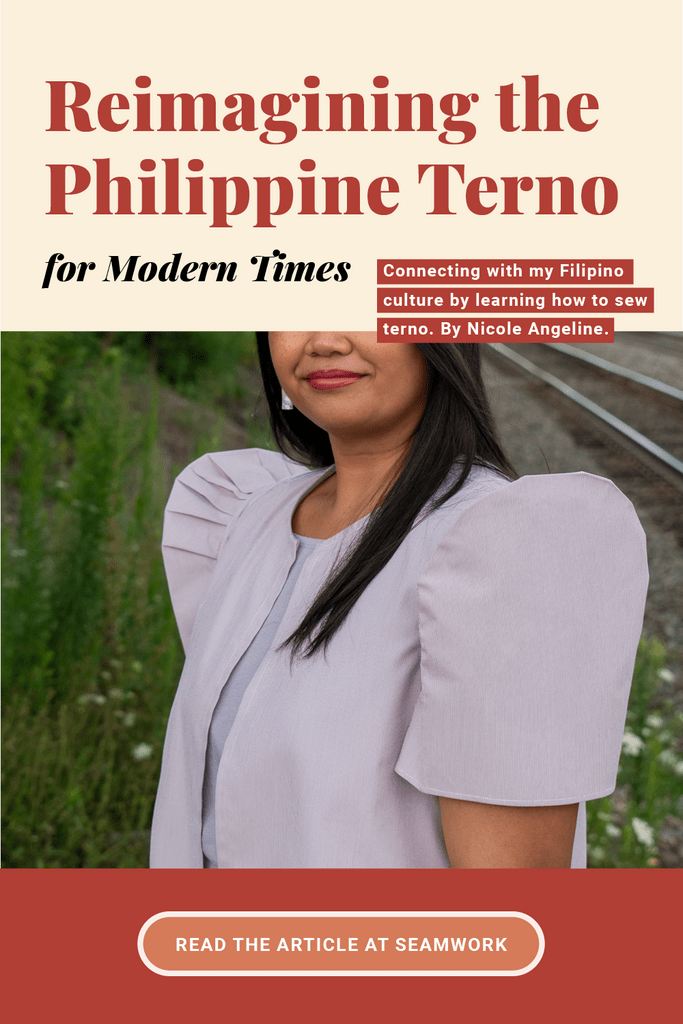