Blogger and entrepreneur Tabitha Sewer talks about the connection between sewing and mental health and well-being, by Lori Caldwell.

Blogger, Instagram influencer, and entrepreneur, Tabitha Sewer, wasn’t always the sewing maven that she is known for being today.

Tabitha: I grew up with my mom sewing. She tried to teach me as a kid, but I was too busy trying to play outside with my friends. I really did not like sewing… I always thought as a kid, like, sewing is for grandmas.

I actually started sewing in my late twenties...I started teaching myself to sew. My mom told me to buy a sewing machine. So, I was like, “Alright.” 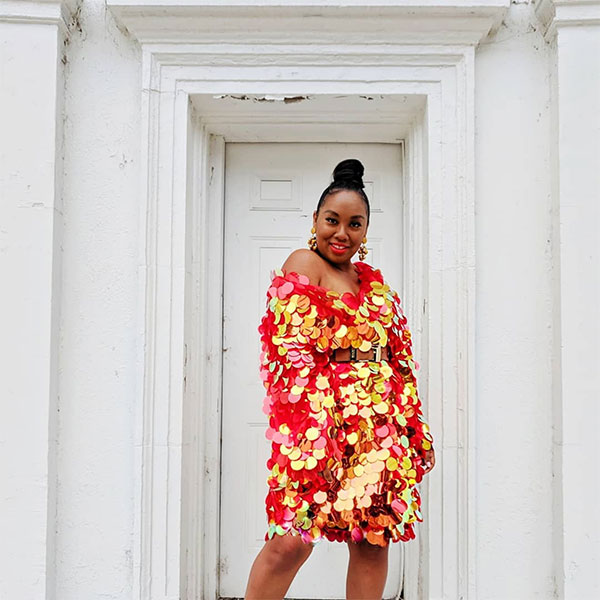 Tabitha turned to sewing because she was looking for something to help her with a difficult mental and emotional transition from her career in the military.

Tabitha: Coming out of the Air Force after serving 10 1/2 years, I suffered from anxiety and panic attacks. I was on heavy medication, and I felt that I could not live the rest of my life this way. So, I weaned myself off and started sewing as a way to distract my mind from racing with thoughts.

It was so bad. I was on heavy medication to where it crippled me.

The last time I took it [the medication], I was trying to walk outside of my house, and I had a panic attack—full-blown panic attack.

And my son, at the time, he was not even one yet. I had this medication where you would only use it in a high-pressure moment. And, I took it, and it knocked me out. I remember I was crippled. I couldn’t move. My son, he’s just taking care of himself because I can’t move. From that moment, I knew I had to take myself off. I also knew I had to re-train my thoughts.

Through the creation of a sewing practice, Tabitha was able to redirect her thoughts and focus her mind on the present.

Whatever the case may be, sewing distracted my thoughts and it allowed me to just think about what I’m doing at that moment. There’s, like, no room for negative thoughts when I’m sewing, because I’m thinking about what I’m working on. So, that’s where “Sewing Heals” came to be.

On October 1, 2018, Tabitha shared her mental health journey with her large Instagram following in recognition of Mental Health Awareness Week, debuting her “Sewing Heals” T-shirt with part of the proceeds donated to NAMI—National Alliance on Mental Illness. 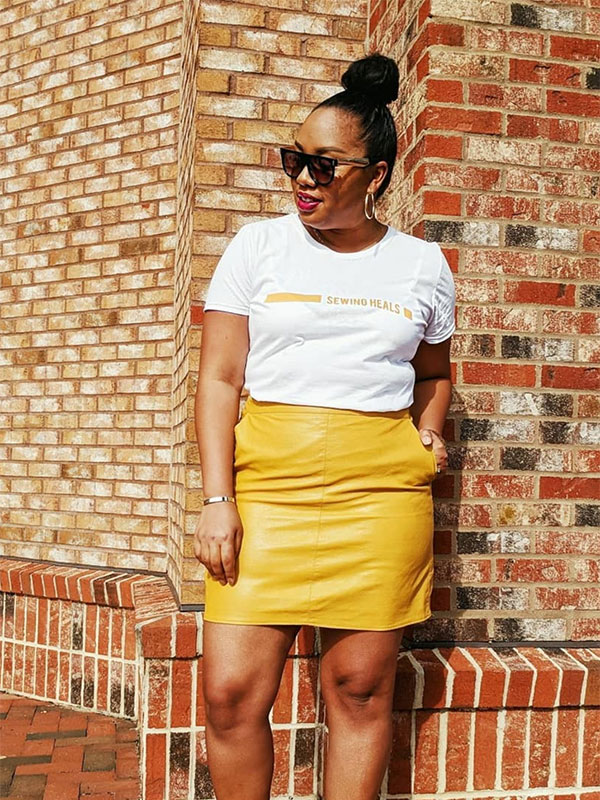 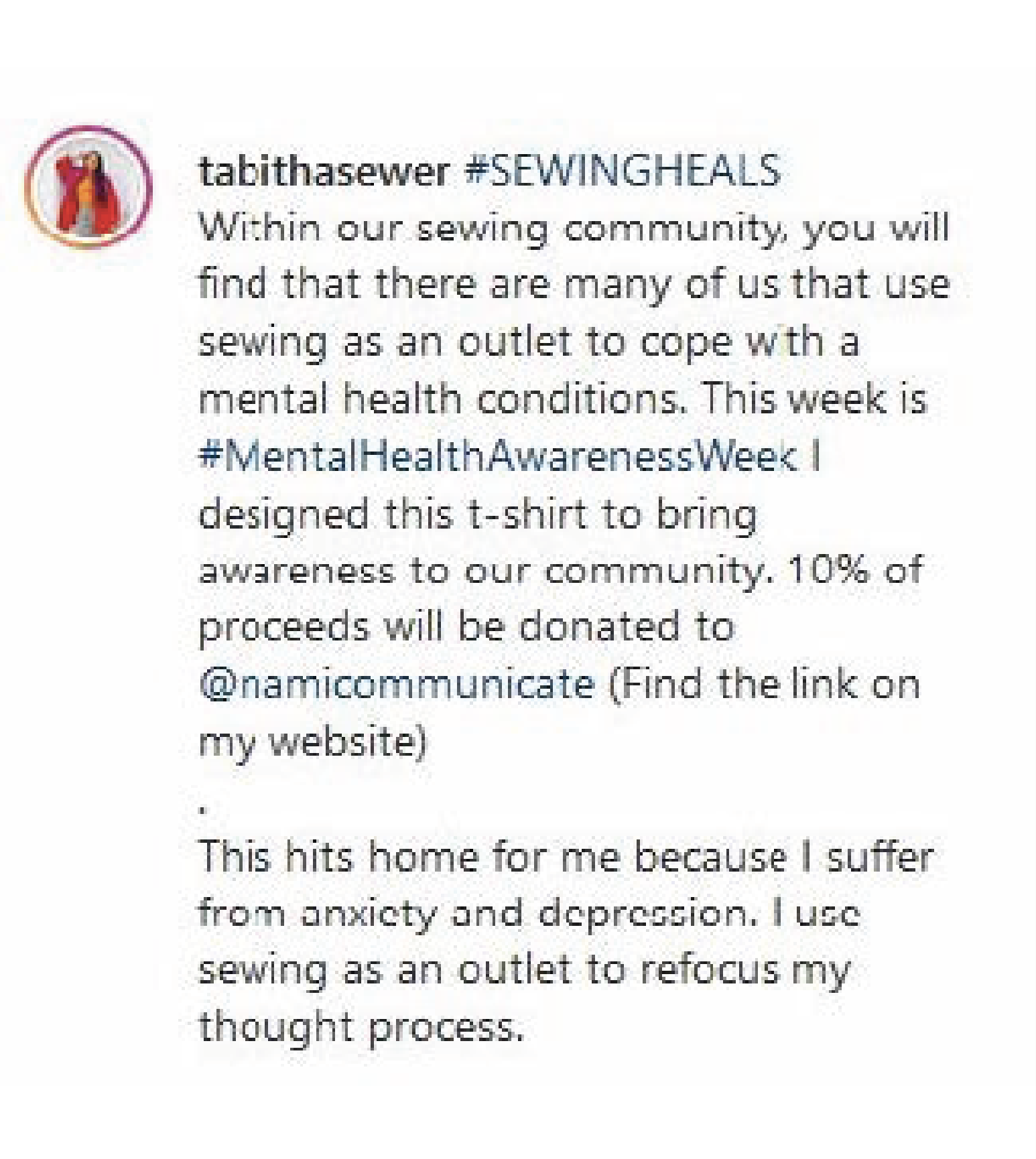 Tabitha: I created the Sewing Heals T-shirt because of what learning to sew has done for me. Sewing is like meditation. It's such a peaceful process, and it's so rewarding. Sewing healed me. I can honestly look back and say it has definitely healed me.

The response from her followers was overwhelming. People began to reach out with their own “Sewing Heals” stories and shared pictures of themselves wearing the T-shirt on Instagram and other social media platforms. Tabitha admits she had no idea the reaction would resonate with so many.

Tabitha:I don’t think you ever know what you’re doing when it happens. I just knew I had to do something.

I was shocked at the response and so extremely thankful that I wasn't alone.

She also admits that, initially, she had reservations about sharing her story so publicly.

Tabitha: I had a fear of sharing my mental health journey at first. Fearful of judgment. But, this was around the time that more and more people outside of the sewing community were talking about it, so I just decided to give it a go.

As a Black woman, her reservations were also rooted in some of the stigmas around mental health and therapy often held in communities of color.

Tabitha: Even still, my dad, he still thinks that way. “You’re going to therapy, why?” And, for me, it’s talking things out.

I think that in our community, we are not taught to communicate our issues because talking about it will make us look mentally crazy or weak. We are taught to uphold an image of strength, no matter what we are going through. Over the years, this has proved to be not beneficial, so I'm so glad that talking about it is starting to become the norm.

Seeing the colors and the textures just makes me happy. That’s why I sew colorful clothes. I don’t wear them often, but I love to sew them. And, if it evokes happiness in me, I know somebody else is going to be happy. 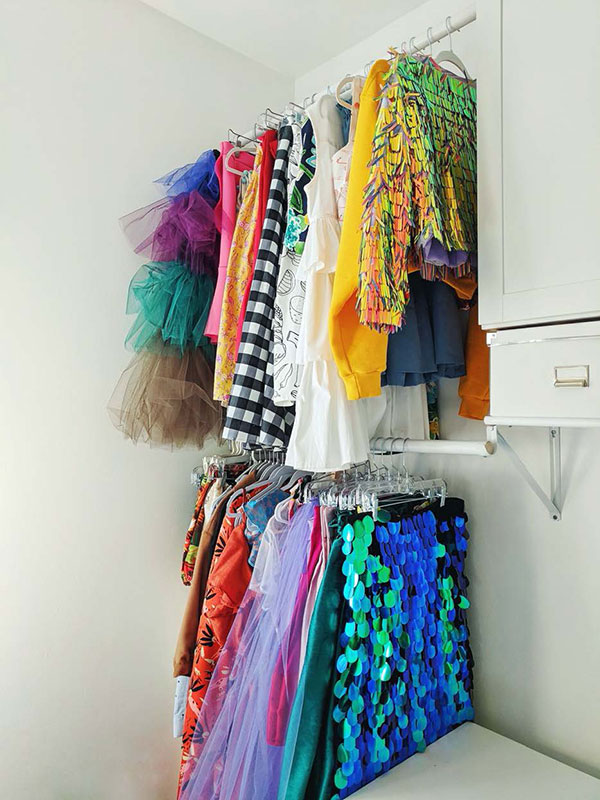 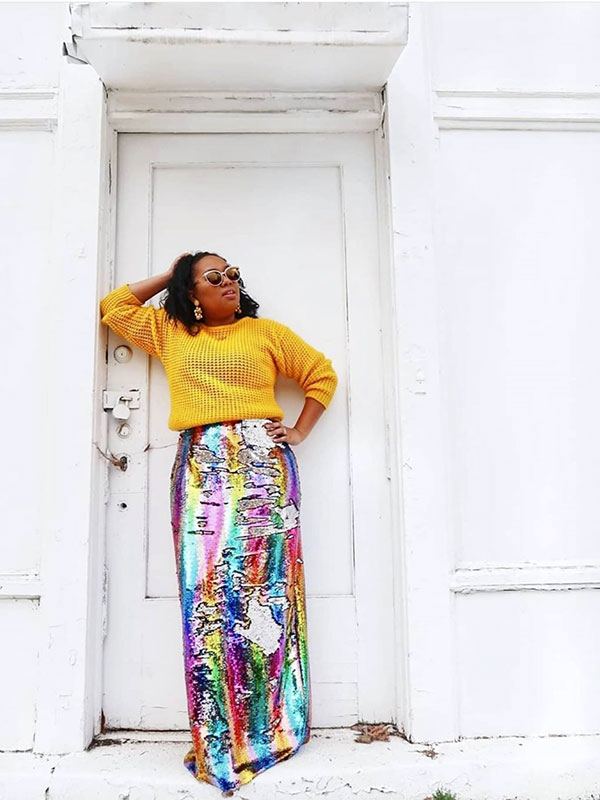 Known for her use of bright prints, colors, and fun textures like sequins and faux fur in her sewing, Tabitha shares that she actually prefers a more toned-down palette in her everyday life. She simply “plays” with color and texture because it makes her feel good.

Tabitha: My favorite color is black. I wear black almost every day ‘cause I don’t like attention. I don’t like to be seen out in public.

But, when I’m sewing, I know my mind just focuses on that...Seeing the colors and the textures just makes me happy. That’s why I sew colorful clothes. I don’t wear them often, but I love to sew them. And, if it evokes happiness in me, I know somebody else is going to be happy.

It’s the process of “Sewing Heals.” It’s kind of like—I always take it back to people who paint. They have all these canvases piled up in their house. A lot of times, they don’t hang them up on their walls. That’s like what sewing is for me...I have a lot of stress. I just want to sew, and just sewing all these clothes, even if I don’t wear them, just the process alone is just—“Ahhh.” 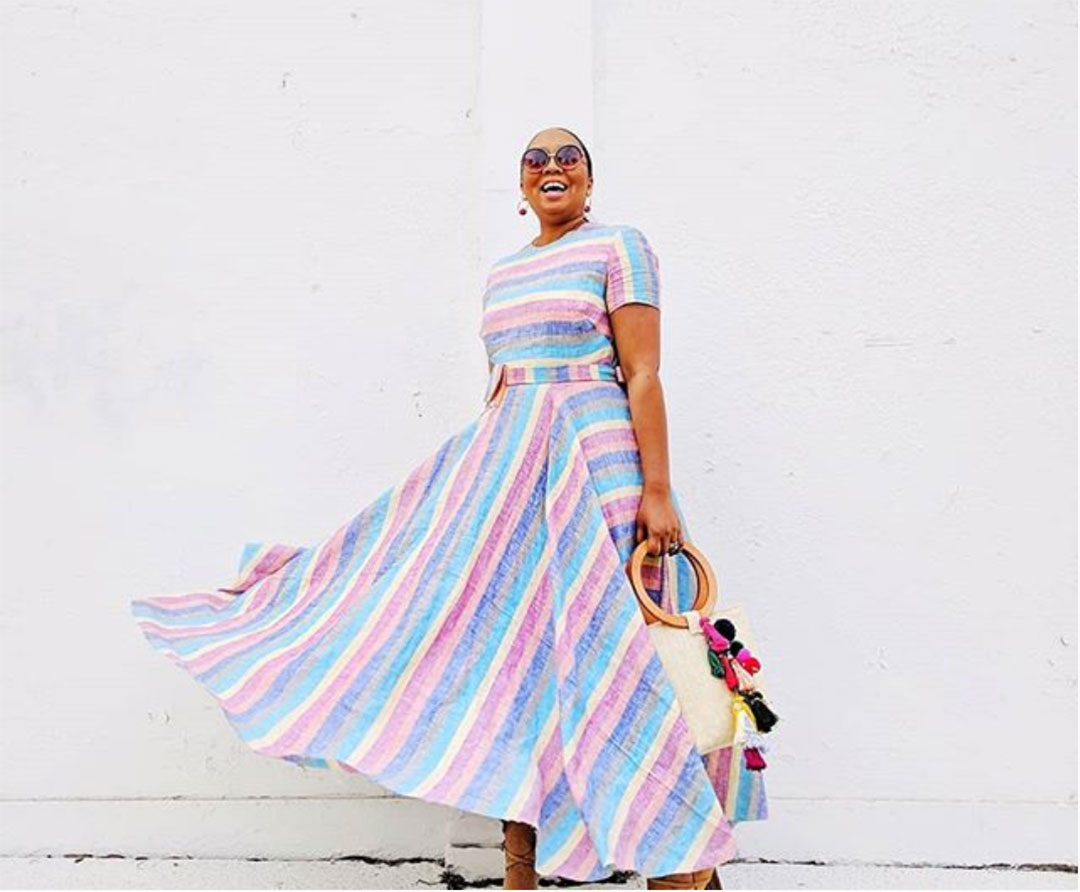 So, what advice does Tabitha have for the Seamwork community about creating a sewing and craft practice to help with their well-being?

If you are like me and your mind races with all kinds of thoughts, sewing is an incredible tool that will help slow down those thoughts. It will allow you to focus on the task at hand.

Depending on the project you choose, sewing can be a bit stressful, but it doesn't have to be. Choose a project that's easy or something you've done before that you want to perfect. Take your time with this project, and focus on creating great work. Limit your distractions and focus on each step of the process and try not to rush through it. The reward is not only what you produce at the end, but the fact that your mind was so focused on sewing that you didn't have the mental space to think of anything else. 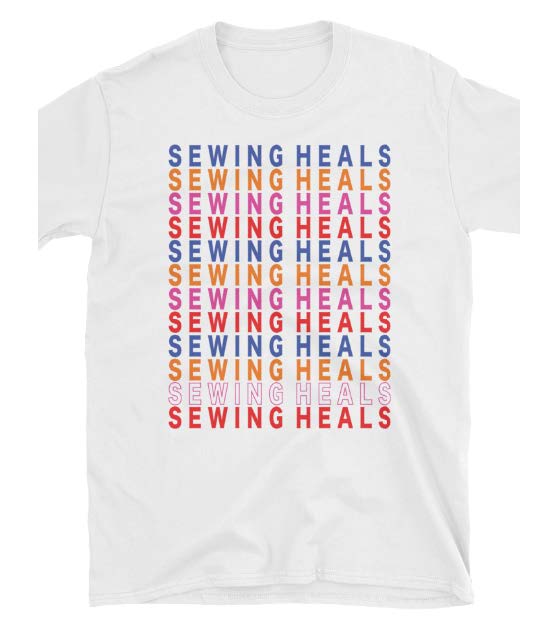 An updated version of Tabitha Sewer’s “Sewing Heals” T-shirt is available on her website. 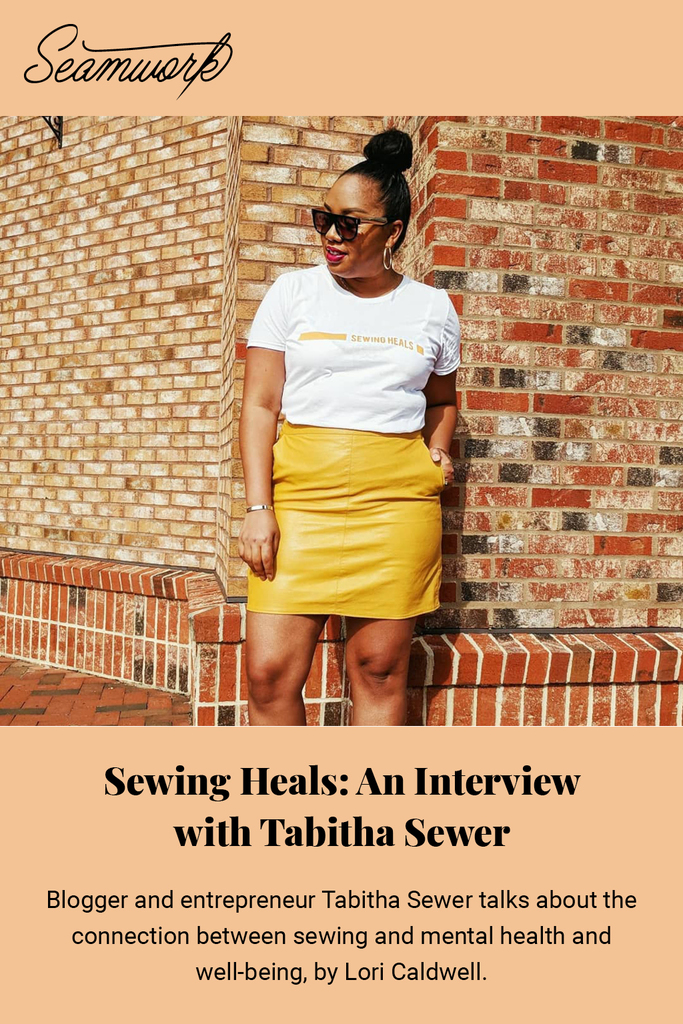