What’s in a Pattern Name?

Have you ever thought about names? Where do they come from? Do they have a special spelling or a cultural context—or do they derive from a specific heritage?

The way we use names for people, patterns, or clothing carries meaning, yet, we often overlook much about names, like their origin, pronunciation, and meaning. 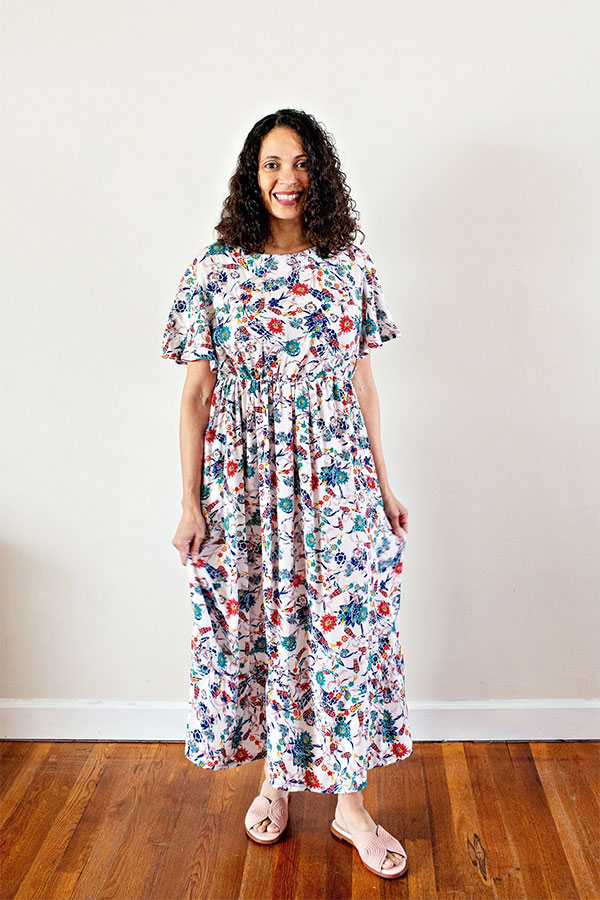 In today’s global society, understanding the deeper meaning of a name and how and why it is chosen gives that name power. Taking the time to understand the name shows respect, especially within a historical or cultural context.

Some of us might not have given much thought to the significance of a name. But I’ve always had to engage in such thoughts.

I spoke to several of my fellow Seamwork Ambassadors about what goes into naming a sewing pattern. I’ll share their names along with how they feel about the importance of names for sewing patterns—beginning with my name.

It Starts With Pronunciation

Growing up in the United States, my name has been a source of struggle for me for most of my life. My name, Katiusca, has two vowels—i and u—that form one sound. That sound, called a diphthong, is often mispronounced. In addition, the sequence of letters in my name is not typical in the English language. But that’s just it, in the English language. In Spanish, which is how I pronounce my name, it easily flows. There is no confusion about the vowels being together or how to pronounce it.

The difficulty of my name, and the current concern for using names from other cultures in sewing patterns, had me pondering the real significance of names. Does the origin of a name matter? Do names with a religious or cultural significance require special treatment? Are we not giving names the significance they deserve?

Names can evoke a feeling, a place, or a time. They also denote historical or familial connections not easily identified at first glance. Correctly pronouncing someone’s name demonstrates gratitude and a recognition of its unique nature—it signifies respect.

So what does this mean for sewing pattern names?

Some people in the sewing world are still learning that certain pattern names have an implied cultural or religious significance that the designer may not have considered. Often, designers chose the name because the pattern reflected the style of a different culture or region. However, being unable to articulate the significance of a name can lead to a slippery slope of cultural, ethnic, and racial appropriation. 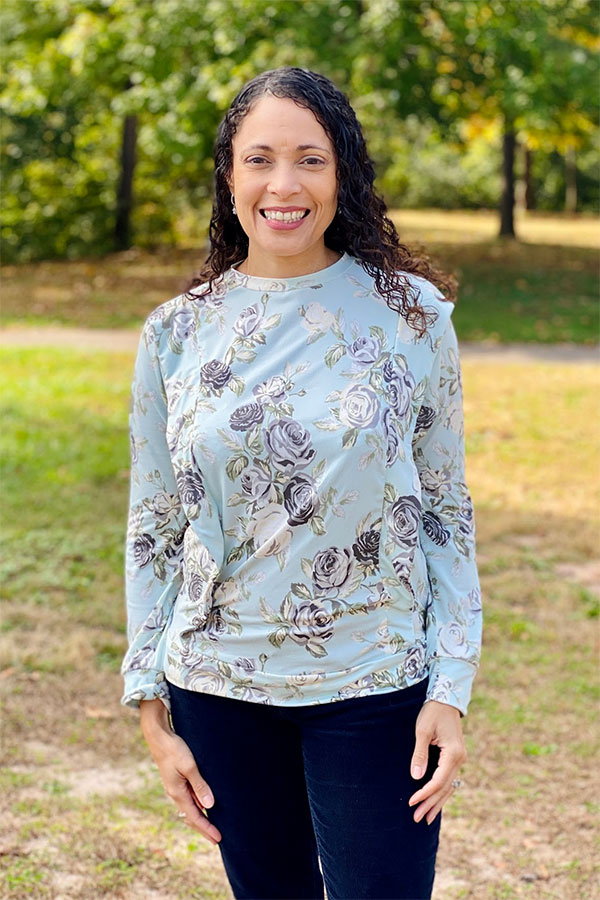 Katiusca in the Rooney sweater hacked with ruffles. 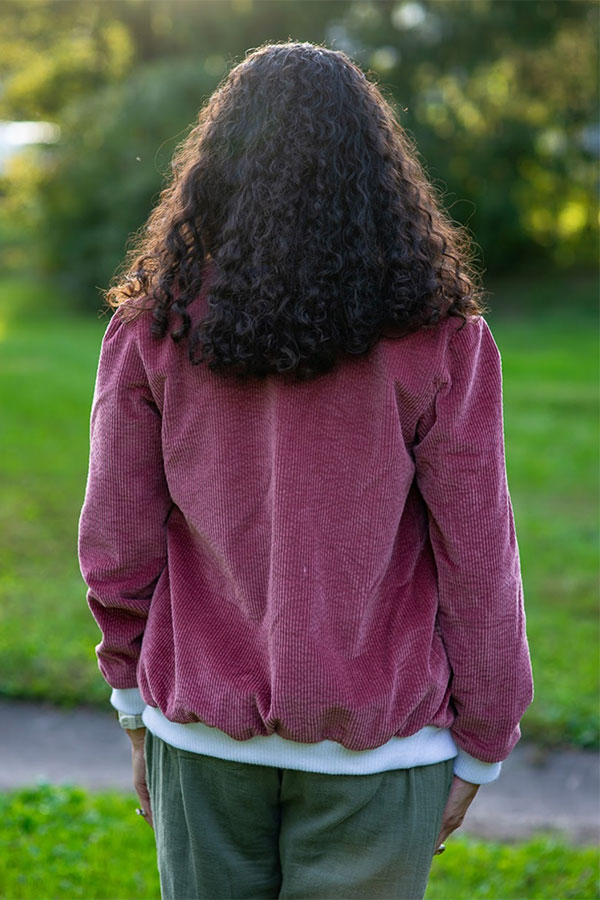 Katiusca in the Larkin bomber.


In Western society, even though names may have meaning, they are often modified for convenience. Names are shortened or completely changed for ease of use. Sometimes they are used without context or real meaning. Yet, for many of us, names are a way of staying connected to our heritages or honoring a family member or important figure. As an identifier of the self, names also help us celebrate ourselves.

Does the home sewist think about the use of names in patterns in this way? About how a name has an impact on them, their sewing, or the larger sewing community? Do they care where the name comes from if the pattern is fun, cute, or popular? Do they see that, even though we are globally connected, our sense of culture does not disappear just because our perception of the world has shrunk?

There may seem to be many more questions than answers, but understanding that a name is inherently significant allows us to respect the diversity of our global sewing community.

While pondering pattern names, I asked some Seamwork Ambassadors about their thoughts on pattern naming.

Emma noted that names allow her to stay connected to her European heritage (English and Scottish with some Romany). Her family uses traditional names to stay true to the past in a way that honors the name, her cultural background, and her family. 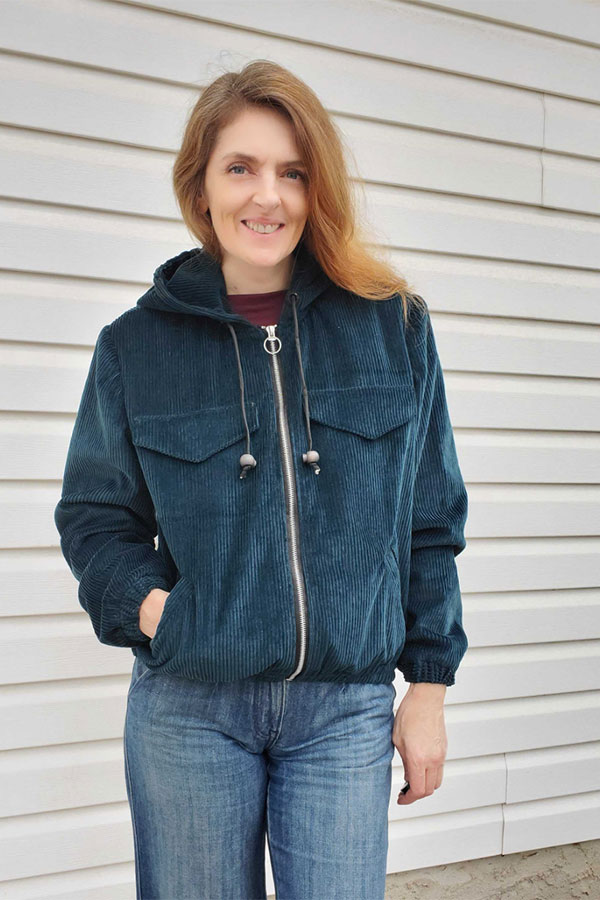 Emma in the Larkin bomber.

Denise stated that she has noticed that pattern names have swung in many directions, from appreciation to appropriation. She also stated that names should not be used to commodify a culture but to show respect, love, and appreciation. 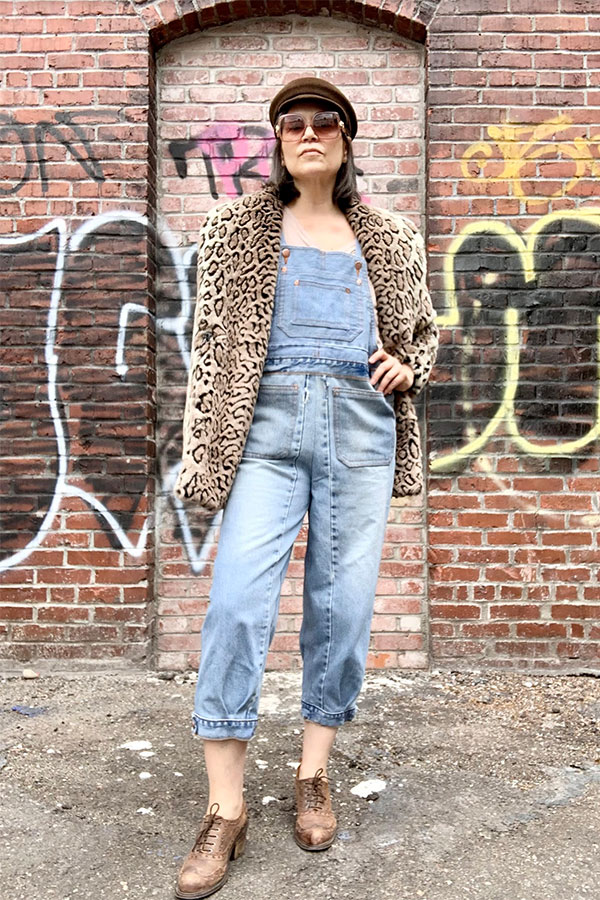 Denise in the Jill coat and upcycled Beckett overalls.

Tai, who has had a Seamwork pattern named after her, said she felt honored when her name was used for a pattern. She noted that sewists are a community, and naming patterns after those in the community is a beautiful extension of that idea. It brings people together. She was most pleased by the effort of Seamwork to ensure her name was pronounced correctly.

Along those lines, Denise also shared that sewing patterns named after someone you know is fun, adds value, celebrates the person and the sewing community's diversity. It can also push sewists to try new patterns. 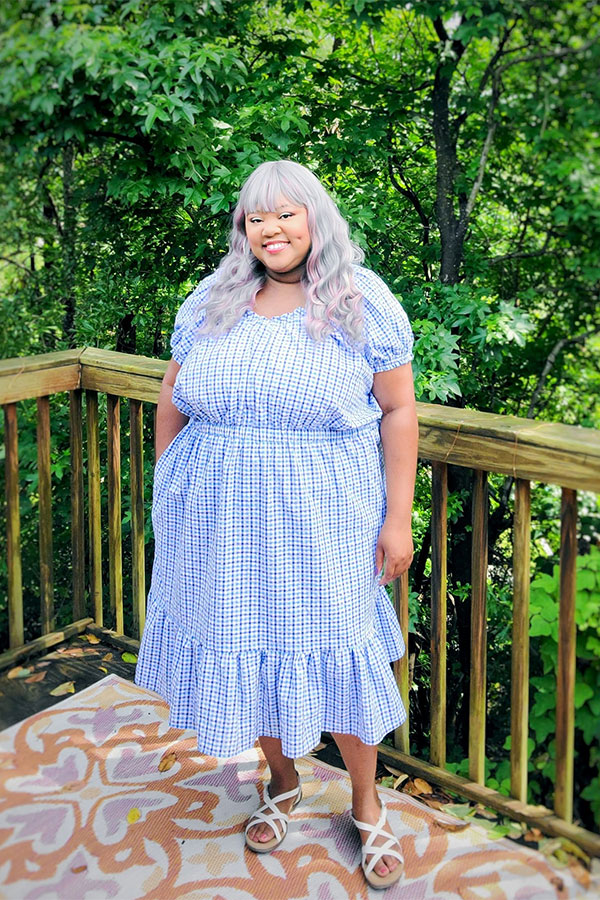 Tai in the Madhu top.

Louise shared that research shows that names personalize things and people to form closer bonds. As a Principal and educator, she truly understands the importance of knowing a person’s name to break down a communication barrier and build familiarity and connection. For example, Louise was excited about Kari’s pattern (Kari is also a Seamwork Ambassador) because she had connected with Kari through Instagram, which allowed her to feel a closer bond.

Louise also said that she loves that patterns have names. It allows her to greet her patterns by name (Hello Irma! How are you today?! Oh Grace, there you are!) and personalize her handmade wardrobe. Relatedly, Denise said that naming a pattern after someone helps to represent the company. For those that are ambassadors, it adds value, celebrates them and the sewing community and craft. She believes that as long as there are clear agreements about using the name, naming a pattern after a person is fun! 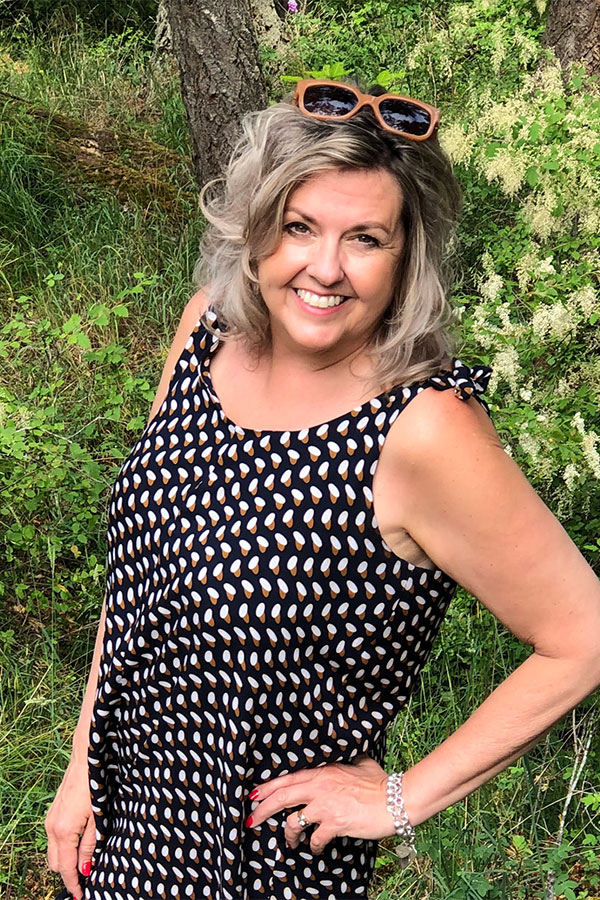 Louise in the Kari romper.


Hi there! I’m Haley. And I design the patterns here at Seamwork. Did you know that we haven’t always named our patterns after people? In the past, we named patterns after places. We even had themed collections—such as a sweets and tea collection. In 2016, we began naming patterns after people, and when I took on the role of pattern designer in 2018, I knew this was a tradition I wanted to continue. Names like Francis or Flor made the patterns come alive in my mind, allowing me to picture the maker and their joy in sewing and wearing the garment. But these imaginary makers were just that... imagined.

When Tino reached out to me last year, I felt inspired. The sewing community is a diverse and beautiful space, which isn’t usually reflected in many pattern names. I knew that Seamwork could do better.

From that point on, we have made it a point to name some of our patterns after Seamwork Ambassadors, who work closely with our team to help give feedback, share projects, and connect with our worldwide community of Seamworkers. If we name a pattern after an ambassador, you’ll find that ambassador’s information on our product page so you can meet them and follow their projects. 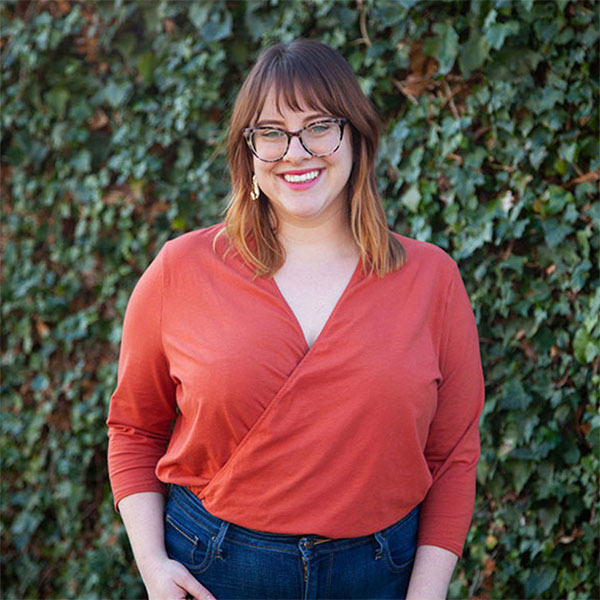 As 2021 comes to a close, here at Seamwork HQ, we are already hard at work on summer 2022 patterns. I can’t wait to share those with you and introduce you to even more Seamwork Ambassadors then. 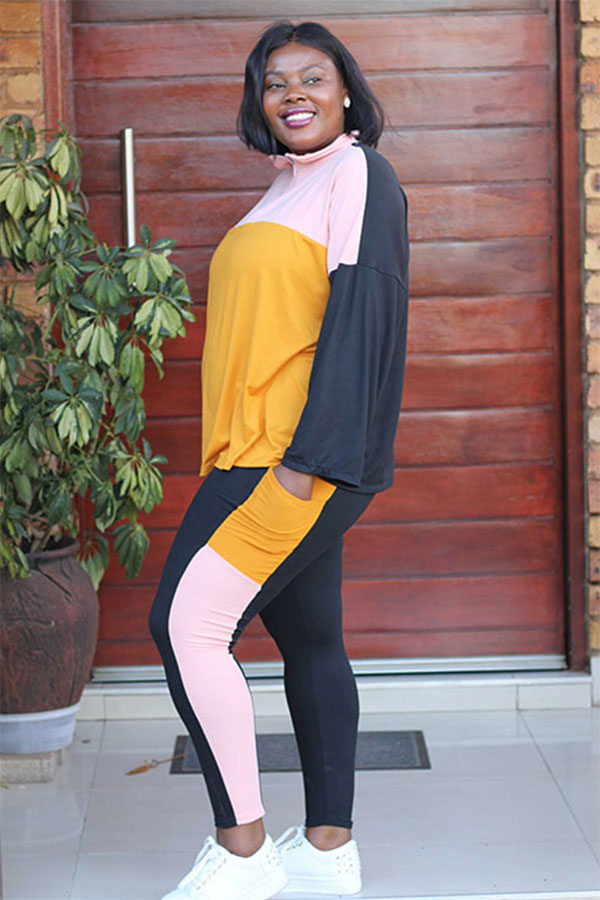 Tino in the Tino leggings and Amari jacket.


Lastly, I asked Tino for her thoughts on pattern names, and she shared that she has also spent time thinking about how pattern companies name their patterns. Tino told me that she had read an article in Forbes, stating that job candidates are still being penalized for having “ghetto” or Black-sounding names.

People with Black-sounding names received fifty percent fewer callbacks even when they were qualified for the position. Tino thought, “how amazing would it be to have diversity in pattern names since the sewing community is a large and diverse one? Why can’t … pattern[s] be named Keisha, Kenya, or Jamal?” There are many home sewists with diverse names “who are highly skilled, hardworking, and could potentially make a huge impact but [who are excluded] because of their name.”

This sent Tino down a rabbit hole of pattern name hashtags. She noted that most of us find a pattern name through hashtags. While browsing them, she noticed that most names were very Westernized and only represented one segment of the population, which was disproportionately white. So Tino reached out to the Seamwork staff to see if they would include traditionally Black or culturally diverse names when naming their patterns. Seamwork was open and agreed to take that step forward. Tino has a pattern named after her , and she was totally honored and excited about it.

Tino and I have culturally diverse names, and we understand the importance of a name in the context of a global community that comes together through a specific craft such as sewing. While it’s clear to some that representation matters, we can still grow a deeper understanding of the meaning behind these names in ways that we might have previously overlooked.

As Tino so aptly told me, “I want to belong to [a community] that celebrates our differences [and does so through] our love of sewing.”

So what’s in a name to you?

Are you curious about our naming conventions and history here at Seamwork? Click here to learn more.


Love the article? Pin it for later! 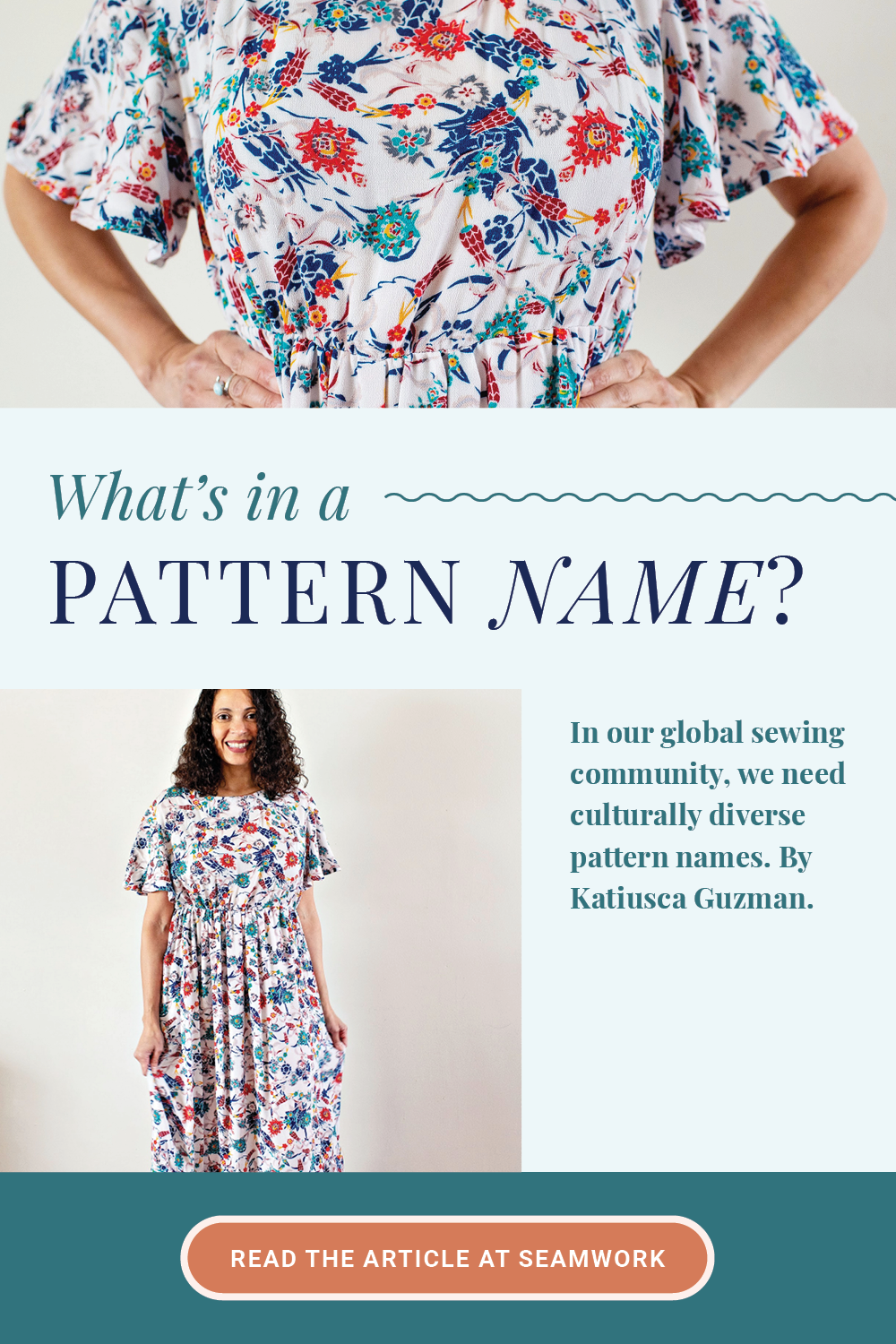 
Katiusca loves working with her hands, and her love of sewing started over 10 years ago when she made handbags for her bridesmaids. When she is not sewing, she is knitting, photographing nature, or interviewing guests for her podcast, Between These Stitches. You can find her at betweenthesestitches.com or on Instagram under the same handle. 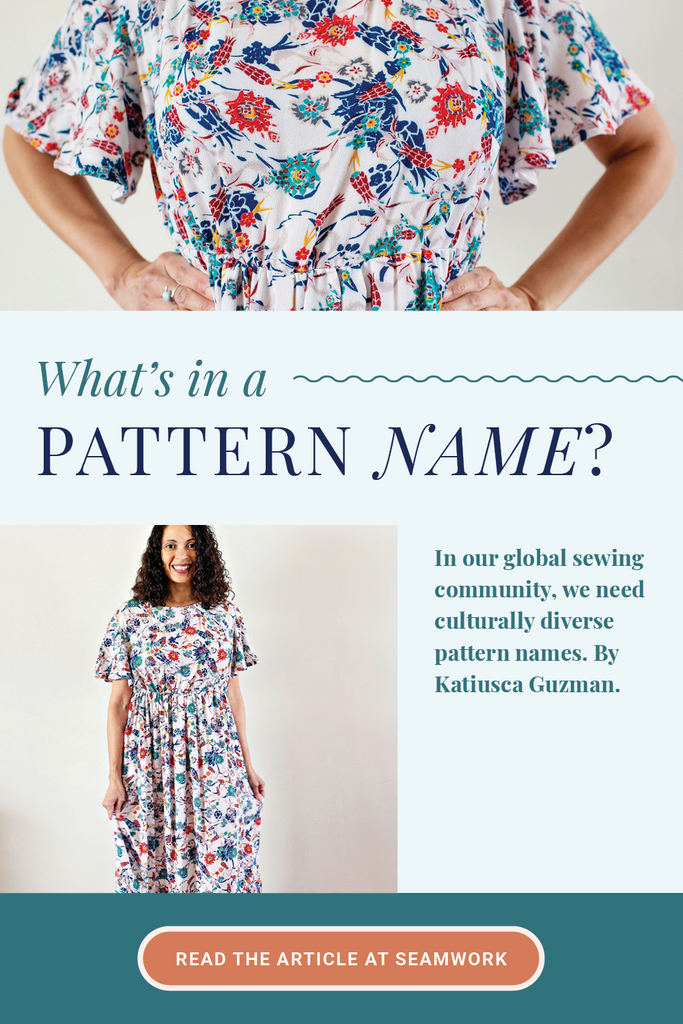