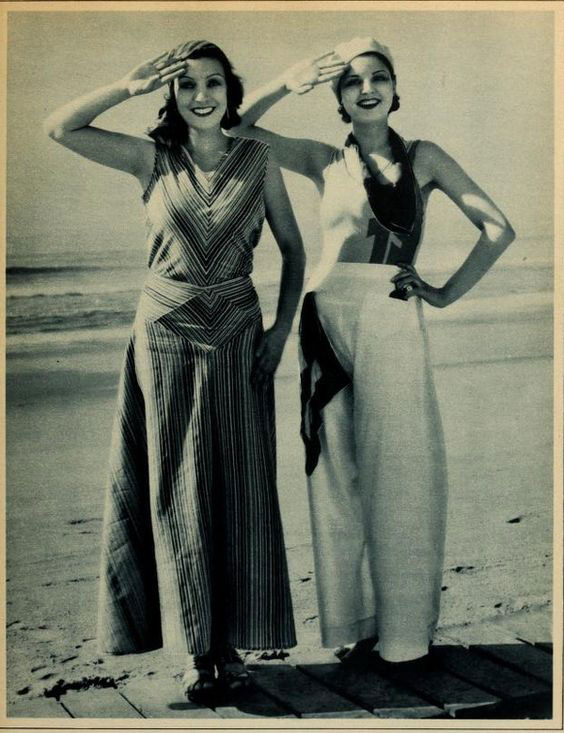 In February 2016, the female flight attendants of the British Airways mixed fleet finally won a two-year battle over the right to wear pants. The crew’s union declared British Airways was “joining the twenty-first century.” Furthermore, they stated, “Not only is the choice to wear pants a victory for equality it is also a victory for common sense.”

During the 1950s and 1960s, there was no more glamorous image of a liberated woman than an airline hostess. These immaculately presented women in their prestigious uniforms represented an independent income, freedom, and travel. While their main role was supposedly to help and protect travelers, British Airways and most other airlines de-emphasized uniform functionality in favor of creating sexy strutting advertisements. Flight attendants had to comply with height, weight, and strict beauty requirements. Fifty years later, while women in other industries have long gotten past such sexist requirements, the airline industry remains a surprising holdout. 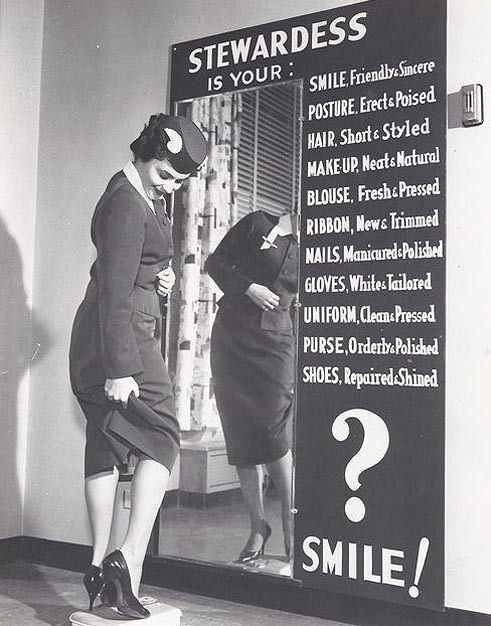 A stewardess checking herself against the rules.

However pervasive pants are today, they can still cause a surprising amount of controversy. Whether it is Hillary Clinton being chastised for looking too masculine in her pantsuits, a transgender man trying to find clothing for his body, or women fighting for the right to wear pants at work, one innocuous pair of pants still holds a lot of power.

For so long, women’s fashions prohibited movement and the ability for the female population to do anything but act as an accessory. Wearing pants gave women the freedom to move unencumbered and participate in society as an equal to men, a welcome change that started with the original riot grrls, the flappers.

The Fashion for Pants: A Contested History

While forward-thinking women had been pushing for a form of bifurcated skirt since the 1850s, most attempts at an early woman’s trouser were endlessly ridiculed and sometimes outlawed. Then, in the 1920s the flapper generation threw caution to the wind and started wearing pants...on the beach. Beach pajamas were the first socially acceptable—and fashion approved—form of women’s pants. These glamorous lounging ensembles were often one piece, featuring a dropped waist and flowing, wide pant legs. The pants themselves had an incredibly low rise, and they looked more like flowing skirts than pants. 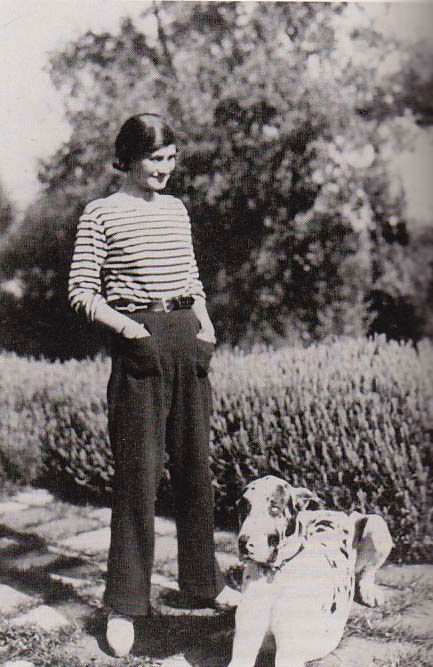 Though the majority of women wouldn’t have thought to bring pajamas out of the boudoir or off the beach, some adopted Coco Chanel’s garconne look and started appropriating their boyfriends' suits. Chanel herself started designing pants for women, but again, they were only meant to be worn for sports and other physical activities.

Then, as now, celebrities, particularly movie stars, were often the catalyst for widespread acceptance of revolutionary fashion. In 1932 Marlene Dietrich caused a sensation when she appeared at the premiere of her movie The Sign of The Cross wearing a masculine tuxedo, hat, and patent leather shoes. Dietrich’s tuxedo was such a spectacle that it began a national debate on pants for women.

Katherine Hepburn took that debate one step further. Marlene Dietrich and Greta Garbo’s femininity was accentuated by their suits and tuxedos, but Hepburn was originally considered too masculine for Hollywood. She wore pants as a rule, was athletic, and generally did whatever she wanted—a nightmare for the studio executives who tried to morph her into a classic Hollywood starlet.

Once, when Hepburn discovered that her jeans had been confiscated from her dressing room during a shoot at RKO Pictures, she returned to the set wearing only her underwear and refused to cover her bottom half until her jeans were returned to her. In 1951, when the luxury hotel Claridge’s informed her that pants weren’t allowed in the lobby, she chose to enter through the staff entrance. We now know Hepburn as a fashion icon, and it’s easy to forget how much her style and attitude changed society’s perception of the glamorous Hollywood woman. 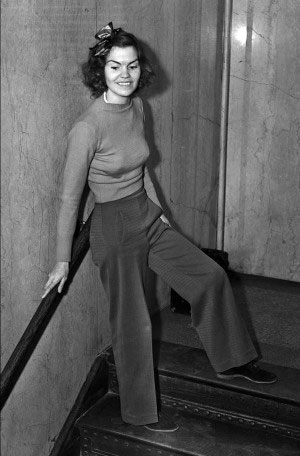 Although Hollywood opened the dialogue on wearing pants, they were still taboo in most public venues. In 1938 Helen Hulick, a kindergarten teacher, arrived at a Los Angeles, California courtroom wearing pants. She was to testify in a burglary trial. The judge, infuriated by her choice of ensemble, sent her home, demanding she return in five days in a skirt. Hulick responded, “You tell the judge I will stand on my rights. If he orders me to change into a dress I won’t do it. I like slacks. They’re comfortable.”

On her return to the courtroom—again in pants—the judge forbade her to testify and insisted she return the next day in a dress. Hulick returned once again wearing pants. She was promptly arrested for being in contempt of the court. Marlene Dietrich and Katherine Hepburn might have been able to push the boundaries of “proper” dress, but the average woman remained constrained by conventional norms.

If it seemed it would take a war to change public acceptance of women’s pants, the advent of World War II accomplished just that. As women went to work for the war effort in factories and munitions plants, skirts were quickly deemed a hazard. Functional coveralls, jeans, and pants became the norm. Pants became widely acceptable for work and for play, especially in liberal areas like the state of California.

However, once the war was over, women were pressured to give up their jobs to the soldiers returning from overseas and return to being housewives, leaving their husbands to wear the pants in the family.

In the 1950s, jeans became a symbol of rebellious youth and no teenage girl’s wardrobe was complete without them. Meanwhile, their mothers continued wearing pants at home, for play, and also for casual social functions. While pants in the 1930s and 1940s were wide legged and masculine, styles in the 1950s started to narrow, leading to the tight capri trouser that molded to the feminine body. 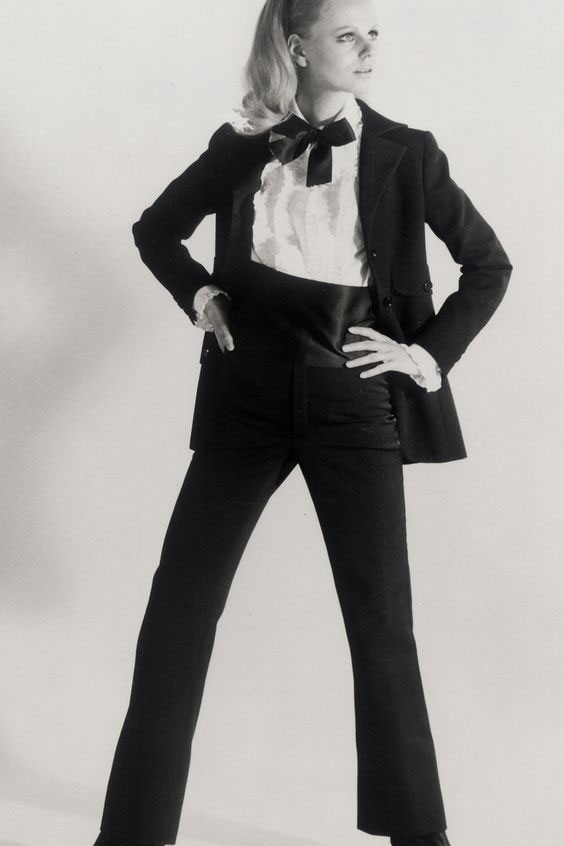 Slacks were introduced into the world of couture by Courreges in 1964. In 1966, Yves St. Laurent introduced the Le Smoking, a tuxedo for women to be worn as an alternative for evening wear. Though Le Smoking was initially shunned by fashion critics, a new style of tuxedo was included in every Yves St. Laurent collection for the next 30 years.

However, even though big-name designers promoted pants as evening wear, many women were turned away from formal events, hotels, and restaurants if they showed up in pants. In the late 1960s, Nan Kemper appeared at the Manhattan restaurant Le Cote Basque wearing a Le Smoking tuxedo. The restaurant refused her entry until she removed her pants and wore the jacket as a super short mini-dress.

Pants gained greater acceptance in the United States in 1972 when Title IX forbade school districts from requiring girls to wear skirts to school. Since then, pants have become more and more popular for play, work, and formal occasions. Today, most women’s wardrobes contain a number of dressy and casual pants, along with the requisite pair of jeans.

As women began their bid to break through the glass ceiling, they adopted the pantsuit. This feminized version of the classic men’s suit was worn as a way for women to be, at least sartorially, on a level playing field as men. In the political field, the pantsuit particularly reigns supreme, although it was a fight to even be allowed to wear a suit at all. 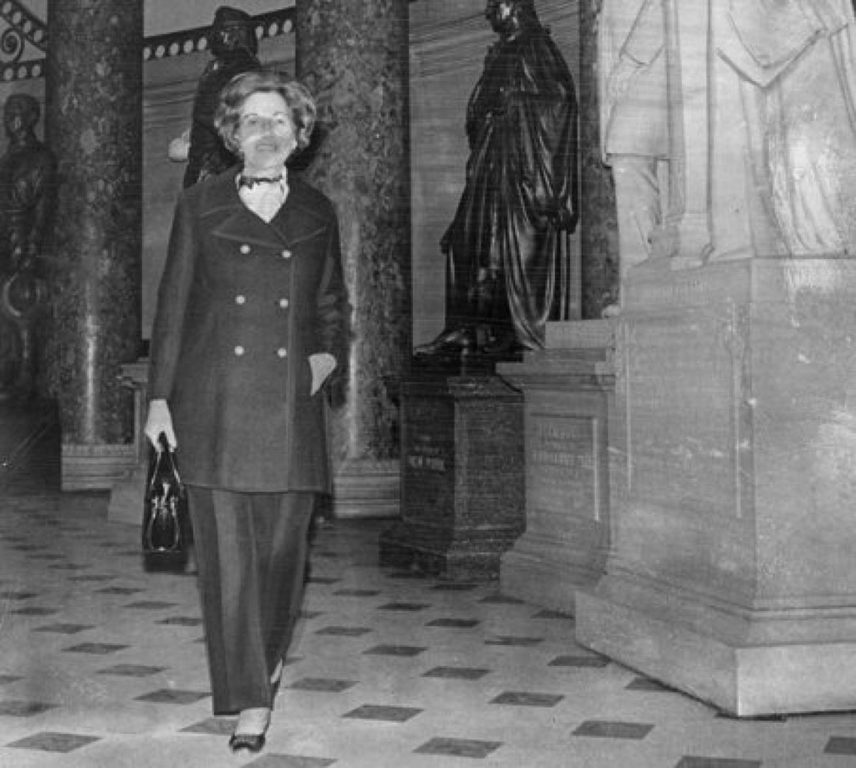 The Senate pantsuit rebellion of 1993 was led by Senator Barbara Mikulski, who was the first Democratic woman to be elected to the Senate in 1987. At the time, the Senate’s dress code stated that women should wear either dresses or skirts with jackets on the Senate floor. Mikulski, tired of waiting for the dress code to be revised, decided to wear pants anyway. In a 2010 CNN interview Mikulski said, “The Senate parliamentarian had looked at the rules to see if it was OK. So, I walk in that day and you would have thought I was walking on the moon. It caused a big stir.”

The political pantsuit is a polarizing garment. Women in powerful roles are often scrutinized as much for their fashion sense as for their politics. One criticism often leveled at powerful women is that they don’t look “feminine” enough in a pantsuit. Presidential nominee Hillary Clinton has been the target of so much pantsuit criticism that she has chosen to take it on as a joke, selling a t-shirt called The Everyday Pantsuit on her site. The front is printed with a trompe l’oeil jacket with pearls, the back says “Pantsuit Up.”

In 1848, Columbus, Ohio established one of the first laws in the US forbidding people from appearing in public in dress “not belonging to his or her sex.” Laws similar to this were instituted across the country throughout the 1800s. Despite the criminalization of a woman dressing in men’s clothing, history is full of stories of distinguished men who, on their death, were found to be women. These laws, which only began to be overturned in the 1970s, forced gender non-conformists to conceal themselves as fugitives from the law. The military was an institution where a woman living as a man could go to blend in. In the Civil War alone, there were over 400 documented cases of women serving in the US Army, having enlisted dressed as men. 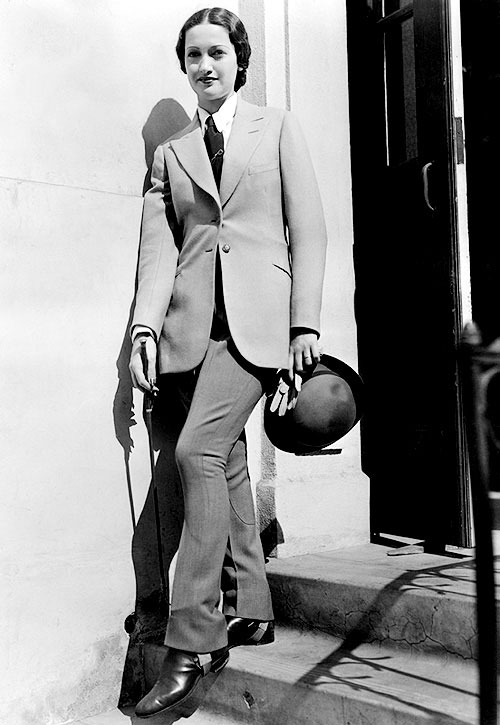 In the last few years, the prominence of gender dysphoria and, particularly, the trans community, has exploded, finally revealing a pants dialogue that had been heretofore concealed. While many women choose to wear pants for fashion or functional purposes, for the trans male community, the social acceptance and legal ability for a person born a woman to dress in menswear allows him to live as his true self.

While today’s trans man has the freedom to wear men’s clothing without being arrested, they have found that suits are still too gender-identified for their bodies. Many trans men fit better in a woman’s suit, but don’t care for the cuts that highlight female curves. Unfortunately, traditional men’s suits don’t fit quite right proportionately. In response, an industry has emerged for gender non-conforming people to purchase clothing with a cut that suits them. Bindle & Keep, a bespoke tailoring company in Brooklyn, New York has been leading the way with their stylish, custom suits that can be tailored to the preference of the client. As the gender non-conforming market has increased, so has the number of fashion designers who cater to their needs. As one Bindle & Keep client remarked in the HBO documentary Suited, “I really don’t want anyone to be able to pick me out from a line of guys and be like, 'there’s curves on this body that don’t make sense'.”

One Leg at a Time

Pants, though now part of women’s mainstream fashion, continue to be a symbol for the evolution of equal rights. The hot-button issue of a woman not wanting to wear a skirt continues to flare up, and the news is full of pant-induced scandals, from the aforementioned flight attendants to a Pennsylvania high school senior being refused admittance to prom because she chose to wear a tuxedo.

So, the next time you pull out your favorite pair of pants, take a moment to appreciate the century of effort that it has taken for you to not be shunned or arrested when you wear them outside. Consider them symbolically, as a measure of how far the fight for women’s (and trans) rights has come, but also how far it needs to go. Then, put on those pants, walk outside, and like pants hero Katharine Hepburn, live as you please.


Betsy Blodgett is the host of the design podcast Hello Atelier!. A fashion history and sewing enthusiast living in Kansas, she spends her time traveling, teaching, and moving cats off her sewing table. Follow her projects and inspiration on Instagram and Pinterest. 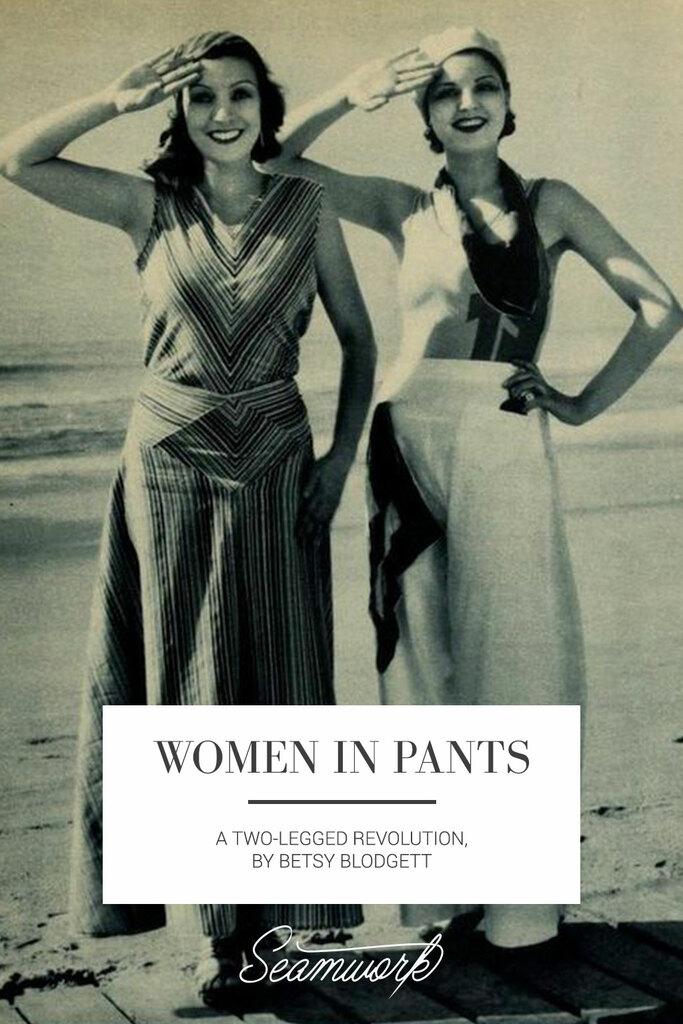